What's happened to the uniform

barny006 said:
Wrecker you forgot your Oilskin
Click to expand...

Had to hand that back in when we left to go to Collingrad for Phase 2.

@Gazunder Hi & a couple of additions to Kits 'n Dits from my Raleigh entry, (just a few months before you in Oct 1960 )

Disclaimer - All others can safely skip this post as the mere ramblings of a then 16 yr old...

Possibly only issued to those of us who were Juniors (O) ATT ? but there was also a pair of black 'deck slippers' with twee square silver buckles; supposedly only to be worn at the accommodation but they looked quite tiddly up the line in rig. Sadly, being chip & narrsty, they lasted only a couple of hornpipes after a heavy downpour...

Collars - Those issued were the newly-introduced lighter-blue colour-fast type, the earlier versions being dark blue with that colour running into the individually-stitched white stripes and thus needing a fair few washes to shift that discolouration... Providing there were no streaky patches the resulting 'washed out' & faded appearance marked one as an old(er) salt. BTW that blue, squared edging collar material of white fronts was similarly changed around that time.

Overalls? Flanelette striped B.Hatters ovies were issued, but I cannot recall if the working, romper-suit ovies were issued at Raleigh or later on at Collingwood at my Part Two, Electrical Branch, training. Besides that there was at, the NE Raleigh accomm. huts, an ancient civilian mother-hen ex-RN retainer. Quite an imposing character; short and roly-poly with a ruddy yet baby-faced complexion he was always dressed in a well-faded tight-fitting old pussers overall and wore a black peaked cap with a silver Admiralty pattern anchor badge. Stern but kindly 'twas this old Janner who set up each trainee's name stamp wooden blocks ( 1 x Black & 1 x White for the ink/paint kit marking Ex.) & taught us all how to use them 'crecklee - Balls it all up and the replacement kit would come out of your own pocket, me lads!' So @ £5.00 on a payday but only £4 10/- the next & each alternate one we were very careful... )

It may have been mentioned but there was also that Woollen Navy Blue Comforter (= scarf) which turned inside-out also subbed for a 'Pirates Hat' wi' a tail, I can still recall that pungent smell of the mothballs it was issued with even now!

Blue Suits? Rough-as-a-badgers-aris-serge for the No.3s which were then still of the old, flap-front trouser and pull o'er the head jumper, style. I seem to recall that the Nos ones (of a slightly finer serge plus zips to top & trousers, made to measure with gold badges, with 'some allowance for growth' ) were only ready for us towards the very end of the six weeks Part One, then nowhere near the big deal that it has since become. Very few guests attended except for those of a few locals who probably only came along to see the agressive ram mascot take firm charge of his hapless & clueless barrack-stanchion handler. What hadn't helped was that the long far-too-early morning breakfast queues outside the massive wooden hangar-like dining hall stretched out alongside that poor ram's pen. What with the unlit Blue Liner he was fed and the cacophony of scores of enamelled tin mugs (White, with a blue rim - another part of the kit issued BTW!) being banged and rattled around his environs doubtless wound the poor creature up ready for his starring part on his big day!

Happy days, sigh, and recalling all that kit brought to mind my Part One lead Instructor, a PO Cox'n Jock Weir, a ruggedly handsome ladies man resplendent with various Medals inc. GS & Korea, and our PO GI Reynolds, that tall imposing bean-pole scouser who's 'encouragements' sometimes included a promised ciggy break at the end of his parade ground sessions. But the wily old git timed them just right so, having collected one for himself from each of the class, we had barely a puff of ours before having to snub it out and fall back in to be marched off at the double...just in time to be late for the next event!!

Oh, almost forgot - that obligatory block of Pussers Hard which was doled out to each of us at some point at Raleigh. Also the huge containers of Teepol were always available for scrubbing out everywhere & some even used it for their own dhobeying. Very rash.

Aside - A few yrs ago, anniversary-holidaying in ermm Malta *, the OH & I visited the Sunday Market at Marsaxlokk. Away from the harbour side tourists trap stalls we came across a side street where a few locals were attempting to hawk various car-boot style items. Hardly any takers but amongst the small stalls of 2nd hand tat there was a badly-carved chunk of the genuine article - a block of Pussers Hard! Sure took me back a bit but a) Mrs. Bob refused to even handle it and b) Mr. Bob did, most reverently for old times sake, but promptly put it back without even inquiring the price. Had I bought that back as a rabbit the suitcase would have stunk of carbolic and no one would have ever understood why...


* At The Palace, Sliema. 5 Star, well located, then newly opened, highly recommended but opt for an upper balcony room, as we did, with a fine view overlooking Sliema towards the creek and Valletta as we did

I bet you looked a right twat in it though.
A

WreckerL said:
I bet you looked a right twat in it though.
Click to expand...

Thanks breathingoutonthewayup & arcticfox042. I have got all the info I needed from here, cheers All.

Joint_Force_Harrier said:
Putting Wrns back in skirts and full fighting order would be a sta, /QUOTE]
!!
Click to expand...

Thanks JFH now I've got funny sensations in my wee wee 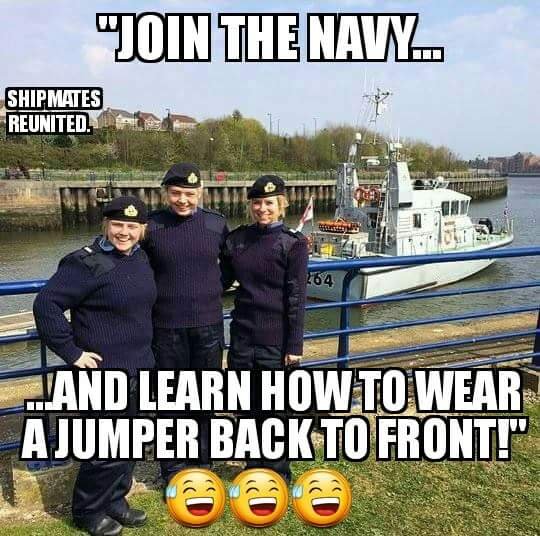 Sent from my SM-G935F using Tapatalk

Sent from my SM-G935F using Tapatalk
Click to expand...