Thick, black regulator for the showers

WARNING - This is NOT a PC post, by any means.

When I was a junior sprog, anyone with more than 6 months' sea-time thought it was a great idea to play these gotcha games. You know the type, the "Long Weight", the "Spare Lash". etc.

This particular one happened to me on the Abdiel (anyone remember her? Flat-bottomed mine-layer), who just happened to have (I presume) a member of the regulating staff who was black. And I was told to go knock on their door and ask for a "Thick, black regulator for the showers", after the badgeman explained that a "black regulator" was for the cold water, and a "red regulator" was for the hot, and they came in two sizes, thick and thin.

Complicated, huh? It's nice to see they made an effort explaining it to me because, let's not bandy words - I was just 16 and as thick as a roomful of Irishmen.

However - I did, in my adolescent haze, smell the tiniest whiff of rat and ultimately, did not do as they asked.

So I was just wondering, did you succumb to any gotcha's?

No? Not even a teeny tiny little one?

Yes I went to the TS and asked for the gun report.
Bang was the answer.

Super Moderator
Not me 'cos I was clever but we did send a baby tiffy inboard for some green rubs, the forewarned Jack Dusty gave him a box of scotchbrites. He was convinced for months after that was their name.
G

I went for a long weight at the buffers store but hey the only reason I wasnt a larne target cox'n(even though I wrote home to say I had been selected!) was that I smelt a rat because EVERYONE in 3 M STBD mess on the Androm KEPT asking me about it over and over!! If only they had curbed their enthusiasm............
F

Sent a baby EM for a new motor for the wind scoops.
F

Baby dabber at Dryad on gollies course. Duty one night as BM. Received a phone call from the NAAFI manager to ask me to pipe that "the NAAFI had now run out of washing powder". Which I duly did .... :blush:

I produced a bunklight bill which caused some hilarity in the mess, especially when the junior members went to the killick of the mess to pay it.

Joined my first ship, the Fearless in Mar 84 on my 17th birthday as JRO. Been onboard about a week and got a bunklight bill for £38, I was horrified at the amount, I was only taking home about £100 a month. Saw the LHOM who informed me that I was sleeping in Jacko's old pit who was always falling asleep while reading! Two days later I'm sat in the mess and someone tells me I have a visitor at the door, go to the door and there's a Cdr (who turns out to be the WEO) stood there with a tool bag, he then duly takes my bunklight apart and tells me it'll be reconnected when I pay my bill.Following day I'm summoned to the CPOWTR's office who tells me that it can be taken out of my pay in allotments, I also get a bollocking from the Joss! It's at this point I ring my mum and explain things to her, she assures me everything will be fine. I'm then piped to the Skippers cabin, he tells me to sit down, I get a lecture about it's not the way to start my career in the fleet etc etc. I'm nearly in tears after he's finished with me. The following day Daily Orders informs me that I've been on a wind up and that the WEO will pay me a visit and reconnect my bunklight, which he kindly did!Still makes me giggle today thinking about it!

Book Reviewer
Bunklight bill for MEM J------l on Boxer went on so long it resulted in angry mum writng ti the captain. As MEO, charge L and many more below involved it resulted pretty much in dept bollocking.

Once got a JMEM sent to us for some relative bearing grease. "The stuff you use on Gyros"

Super Moderator
We did the bunklight bill and water bill to some civvy scientist type chappies on an Icex once. Only came to light when one scientist turned up in Manouvering room with his cheque book asking who he made the cheque out to. MEO was not impressd. Another trip we sent out a dit that as we were going under the North Pole, all watches would be effected by the magnetic field, if people brought their watches back aft we'd look after them. MEO doing rounds asked us WTF were all these watches doing maskered to the de-gaussing MG

It's a bit like the Seaflash Cox'n. On HMS London in the 60's, we picked up a radio controlled boat in Gib. It was called a Seaflash. Word went about that they were looking for a cox'n for it and one guy got sent all around the ship to register for it, diving store for the wet suit, reg office, every department was on the list for his joining routine. The boat was a radio controlled target of course, but all the departments carried it through. Poor guy must have felt awful once he knew what was going on.
Last edited: Dec 26, 2012

In 1999, on the ORWELL, you would have found me on my hands and knees with the other 4 OM's with our fouley jackets over our heads charging deck stickers with DC'lamps as part of specials preps. Very embarrassing...

But it did inspire me to pass it on to others.

This is me giving the bat signals on SOMERSET, our biggest amount of splash Cox'n's ever! 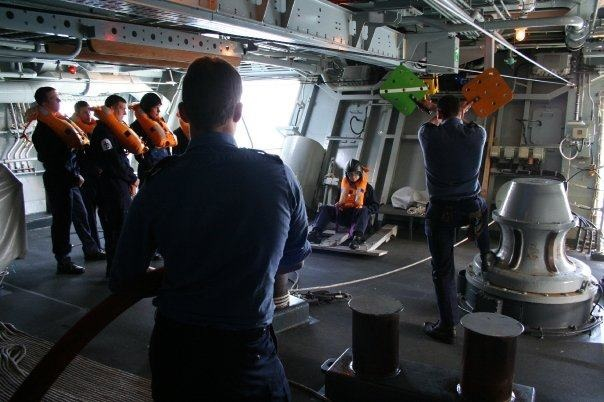 Looks like a standby for reverse conning run to me?

.
.
.
Simplistic as it may seem in the current era;

back in the day when the consumption of duty-free tobacco was almost obligatory a Request Form "... to smoke a pipe." was guaranteed to keep the innocent younker out of harm's way for a couple of days..

Ah the days of MW, stood on the bridge wing getting flashed at by the OOW,MWO & a kilick diver, all in loch uwe(not sure if its spelt like that). listening to the broadcast of "on on on " from the ORS, while the MIB is miles off the tigers tales. oh how I miss them.....

dsgrnmcm said:
Ah the days of MW, stood on the bridge wing getting flashed at by the OOW,MWO & a kilick diver, all in loch uwe(not sure if its spelt like that). listening to the broadcast of "on on on " from the ORS, while the MIB is miles off the tigers tales. oh how I miss them.....
Click to expand...

dsgrnmcm said:
Not what I've heard...
Click to expand...