"As the commanding officer of 847 Naval Air Squadron, part of the Royal Navy’s Task Force during the 1982 Falklands conflict, Mike Booth issued a command to his crew before arriving in the South Atlantic: bring wellington boots. The islands were soggy underfoot, and carrying out duties, including flying, in green wellies proved highly practical.

The squadron was tasked with carrying troops and freight to and from the front line during the conflict, flying for up to ten hours a day. It was a tense ten weeks for those above and on the ground. At the height of the action Mike recalled the “surreal” element of war for the crew as, strapped into their helmets inside a noisy helicopter, they could hear nothing of the mortar fire below and see only puffs of smoke rising out of the heather. Unflinching, they would discharge their load, fly back to base, only to return five minutes later.

Ten years earlier Mike had completed two tours in Northern Ireland with 664 Squadron Army Air Corps at the height of the Troubles in 1971 and 1972. He had flown a flimsy, single-engine helicopter transporting casualties, army personnel and — on his second tour as a “VIP pilot” — a nervous Northern Ireland secretary, Willie Whitelaw, and the defence secretary Lord Carrington. Although he returned from Northern Ireland with a mention in dispatches, the experience left a vestige of negativity. He recalled the persistent fear, the casualties (the soldier he picked up with his face half blown off), the anti-British sentiment and the spitting. He was in the air on Bloody Friday on July 21, 1972, when more than 20 bombs exploded in Belfast within 80 minutes, most within half an hour, resulting in nine deaths.

Michael Booth was born in 1949 in Portsmouth, where his father was an instructor officer in the Royal Navy. Mike’s father became the head of meteorology and oceanology, and was posted to Australia and Virginia Beach on the east coast of the US, providing an idyllic early childhood for his son. Mike had always wanted to be an aviator and on arriving at his boarding school, Loughborough College in Leicestershire, joined the Combined Cadet Force. On his 16th birthday he had his first solo flight in a glider. A few months after he turned 18 Mike was accepted into the navy. He trained on Hiller 12E and Westland Whirlwind 7 helicopters, and earned his wings in 1969.

Before the advent of the autopilot, hovering in helicopters was a focused exercise that required “all your senses”, he said. “You had your feet on the pedals to keep the aircraft straight, your left arm on the power lever to maintain height and your other hand on the collective lever to maintain your position.”

Mike was one of six pilots in the Gazelle helicopter formation team known as the “Sharks”. He practised for an hour in the evenings and attended airshows on Saturdays so that he could continue as a flying instructor during the day. He demonstrated at shows around the south of England. At the Biggin Hill airshow in the 1970s he dressed up as a princess who was in danger and had escaped down the runway on a small motorbike to be hoisted — along with the bike — into a Wessex helicopter travelling at speed.

Mike’s naval career comprised three parts: aviation, ships and the diplomatic service. In his twenties he had been deployed as a midshipman and officer with 848 Squadron on board HMS Bulwark in the Far East, seeing service in Singapore, Hong Kong, Malaysia and Brunei. After the Falklands, for which he was awarded the Distinguished Service Cross, he returned to ship duties. He was the executive officer in HMS Penelope, a Leander-class frigate, the training commander in HMS Raleigh and the last commanding officer in HMS Scylla.

Promoted to captain, he moved to diplomatic duties as the naval attaché in Bonn, Germany, and Ottawa, Canada, where he described his work as “keeping an eye on the Chinese and Russians”, negotiating defence contracts and, in Canada, skiing.

In 2004 Mike’s 37 years in the navy came to an end and he embarked on a cabinetmaking course in Devon with his wife, Moira, who learnt how to frame pictures. He had met her in 1970, when she was a Wren at Culdrose in Cornwall. They married in 1973 and had two daughters, Clare and Jennifer. After the navy he took a job writing analytical reports for insurance companies, but the Devon course, he said, helped to clear his mind of the military elements in a long and diverse career." 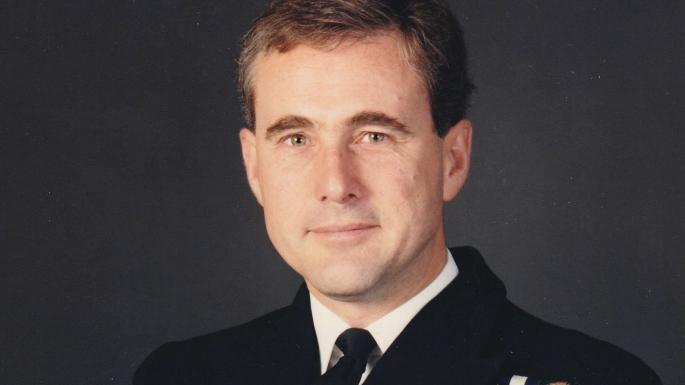 As the commanding officer of 847 Naval Air Squadron, part of the Royal Navy’s Task Force during the 1982 Falklands conflict, Mike Booth issued a command to his crew before arriving in the South

RIP and condolences to family.
You must log in or register to reply here.