The Maritime Executive: "How the Royal Navy Searches Boats for Narcotics"

"Royal Navy boarding teams are using a new set of tools to search wooden dhows for drugs in the Arabian Sea. The new supplies - known as intensive search kits – include everyday hand tools along with dedicated search equipment like angled mirrors and miniature video cameras/endoscopes.

The crew of the frigate HMS Montrose recently used the new toolbox to some success: during a boarding, the endoscope camera located a secret compartment containing $1.3 million in illegal narcotics. Without the scope, it looked as though a long conventional search might not turn anything up.

“The search lasted ten hours before we found anything, although the crew’s behaviour suggested there was something untoward on board,” said Sub Lieutenant Will de la Mer, HMS Montrose’s boarding officer. “More and more dhows are using hidden compartments for their smuggling. This one did and the endoscope was able to look inside.”

The search kit’s introduction was prompted by increasing efforts by smugglers to fool boarding teams and prevent their illegal cargoes being confiscated. The hiding places include false bulkheads, secret compartments and even one occasion when $80 million worth of cocaine was hidden beneath three tonnes of ice in a freezer.

“Some smugglers make no attempt to hide their cargo – nails, or screws sticking out are a dead giveaway,” said Captain Anthony Swan, the Royal Marine in charge of 47 Commando’s Board and Search School. “But there are times when a search can run for hours. You know there’s something suspicious from the way the crew are acting, but you can’t find what you’re looking for.”

The result is the Royal Navy's intensive search kit - standard off the shelf equipment, picked for its ability to survive the abuse of regular mid-ocean boardings. The kits were acquired with the help of the British Army’s search teams, which have honed their craft through searching homes and compounds in Afghanistan for improvised explosive devices, hidden arms caches and drugs hauls.

“We’d become very, very good at the boarding side of board and search – the Royal Marines are world leaders – but the search side hadn’t progressed much: check the paper work, talk to the crew. If something looks untoward, get permission from the master for a thorough search,” Capt. Swan said. “Our search kit wasn’t as good as our boarding kit – and we were determined to put that right. What we’ve acquired is pretty basic, but it’s durable, it works and it gets results.”

The kit's endoscopic "snake" camera is a flexible cable with a camera and light, which is connected to a handheld display/controller. It can be fed through drillholes to see what lies beyond them, and the images it picks up can be recorded for evidence.

Also included is a stud detector – the same hardware-store tool used to find nails, cables or metal behind a wall. The boarding teams use it to find signs of secret compartments.

“And if we don’t find anything, then we have to put the boat back in the condition we found it, so the new kit causes far less damage to be put right,” Capt Swan added.

An additional tool is also filtering through to the front lines: the biometrical enrollment device, which can scan a suspect’s iris and take their fingerprints and check them against a database. “It will ‘red flag’ suspicious people in a matter of seconds,” Capt Swan explains. “The Americans use it, we’re starting to introduce the devices and we’ll begin training personnel shortly.”" 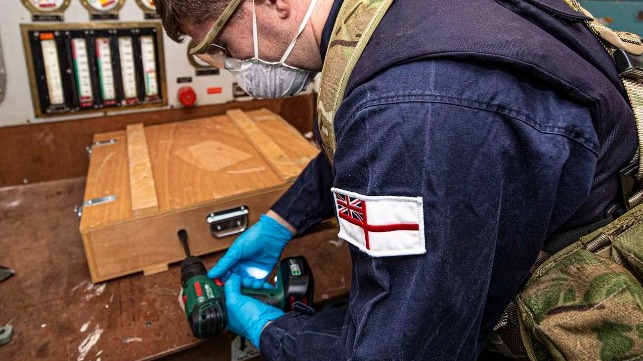 How the Royal Navy Searches Boats for Narcotics

Royal Navy boarding teams are using a new set of tools to search wooden dhows for drugs in the Arabi...

Book Reviewer
A Springer Spaniel is probably as good a tool as any (other dogs are available) besides drugs they can be trained to sniff for explosives and guns.

Super Moderator
I'm never sure it's a good idea to let everyone know how you carry out operations and what gear you use. Police programmes seem to do it all the time.

WreckerL said:
I'm never sure it's a good idea to let everyone know how you carry out operations and what gear you use. Police programmes seem to do it all the time.
Click to expand...

Yep , how many are on TV now ? , I have lost count , cheap dumbed down tele coining it with all the ad breaks.
You must log in or register to reply here.