Team Hallin, led by ex-Minewarfare & Clearance Diving Officer (MCDO) David Hosking MBE and sponsored by his old MCDO course-mate John Giddens (Founder & Chief Executive of Hallin Marine), is only a couple of days away from reaching Barbados and looks set to break the world record for rowing across the Atlantic. Competition with rival team Sara G remains fierce, as can be seen on the Ocean Rowing Society's website here, but both boats are on track to beat the record set by La Mondiale in 2007/8. The question is, which will achieve the fastest corrected time and thereby reign supreme?

Follow Team Hallin's progress on its blog here. It is raising funds for Combat Stress and donations can be made via its JustGiving webpage here.
Last edited: Feb 3, 2011 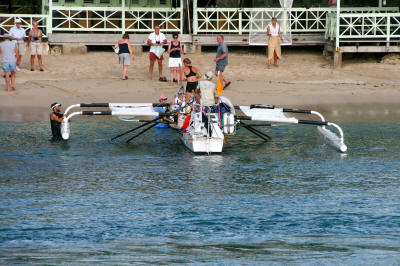 Team Hallin arriving in Port St Charles, Barbados​
Team Hallin is still raising funds for Combat Stress and you can show your appreciation for their remarkable achievement by donating via their JustGiving webpage here.

Woman spends 31 days rowing across Atlantic NAKED with 5 men | Mail Online
You must log in or register to reply here.