In looking again at the reference to the buoys in the 'Place' column of the log, I am wondering if these buoys are in fact marking a safe passage lane through a minefield rather than being purely navigational in nature? In the log extract below pertaining to a voyage from Dublin to Liverpool on Saturday, 16th January 1943, it shows that after passing (Point) Lynas, the ship steams by a series of buoys having first reached a point termed ‘Western’ at 7:32AM. 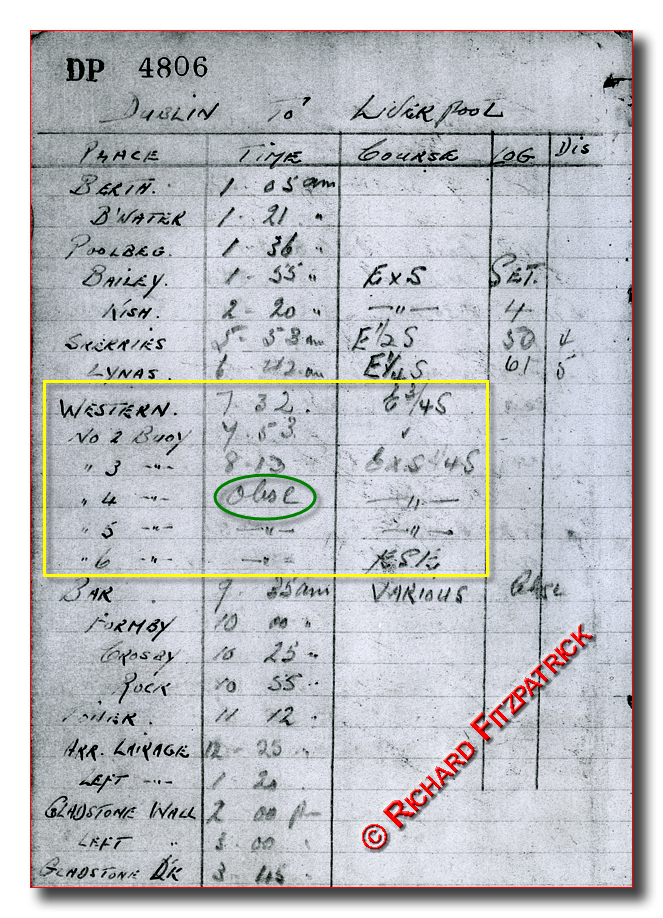 I wonder if the point termed ‘Western’ is in fact the entry point into the safe channel of the minefield? I am also puzzled by the entry in the ‘Time’ column circled green – can anyone make this out?

By pure coincidence, I have at last got myself a copy of Captain Cowie's "Mines, Minelayers and Minelaying" as recommended by Naval_Gazer back in the 1919 Diary ID thread. The book was published in 1949 and is long since out of print but it is a brilliant read if you are interested in the subject. I have extracted a portion of one map in the back of the book below which shows the extent of British minefields in UK waters during WWII: 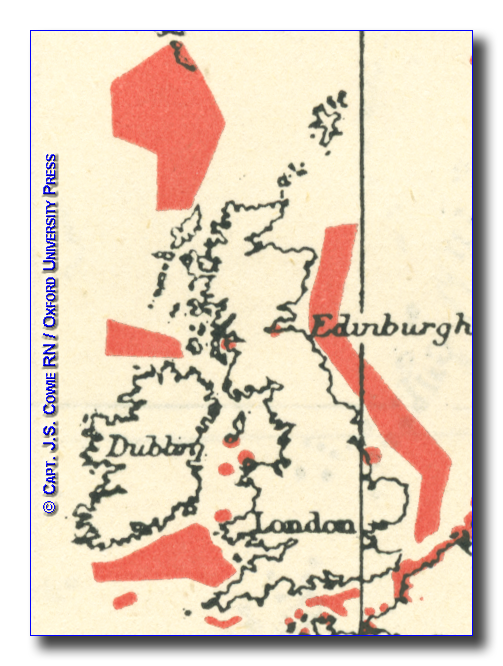 Note the three small fields in the Irish Sea. Does anyone know why or for what purpose these small 'island' fields were sown?

I read elsewhere in the book last night that when sites were being selected for minefields at the commencement of WWI, it was decided to sow small fields near prominent headlands where it was thought that U-boats would use such headlands to fix their positions.

On page 137, I note two distinct periods of sowing fields in the Irish Sea during WWII, one early in the War and the other towards the end of the conflict - both appear to pertain to anti U-boat measures - see page extract below: 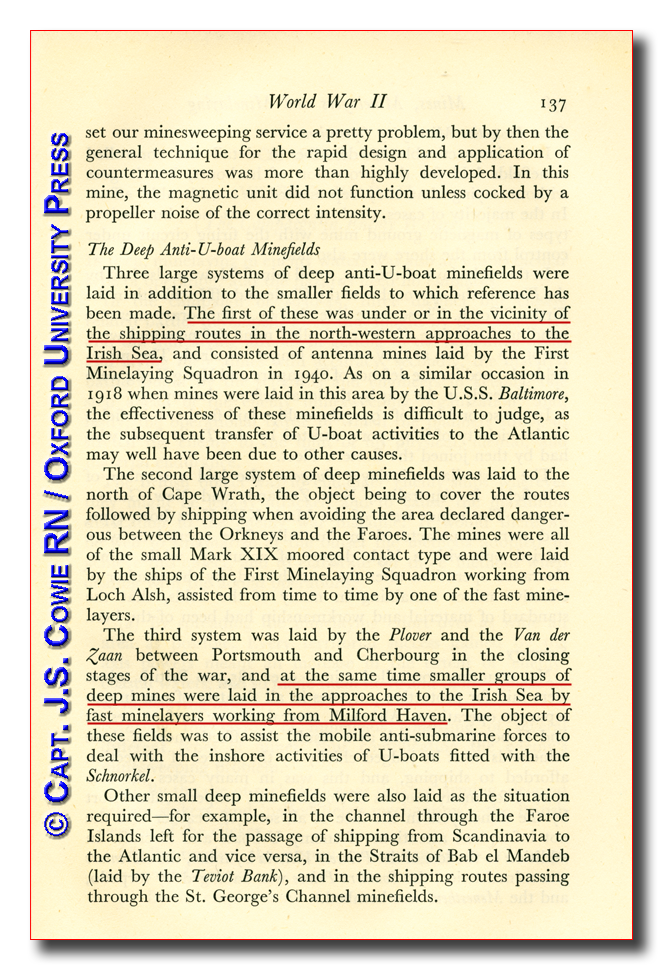 While it appears that minefields in the Irish Sea were almost exclusively anti U-boat rather than anti surface craft, I am still at a loss as to how the red 'islands' on the map extract were selected. Were they used like ‘flankers’ on a driven pheasant shoot, diverting birds over the guns? I may be misinterpreting the wording above in relation to the second period dealing with the Schnorkel boats, but it sounds to me as if this was the purpose of the islands sown apparently at random in the middle of the Irish Sea - i.e. to force the U-Boats into killing zones.

Comments and corrections welcomed and appreciated.

I have tracked down a copy of British War Office Sheet 4072 which may have been issued to neutral vessels when they obtained their 'navicerts' from the UK authorities. It shows at least 10 of the waypoints in the log entry for Saturday, 16th January 1943 - that's if I am interpreting the entries correctly: 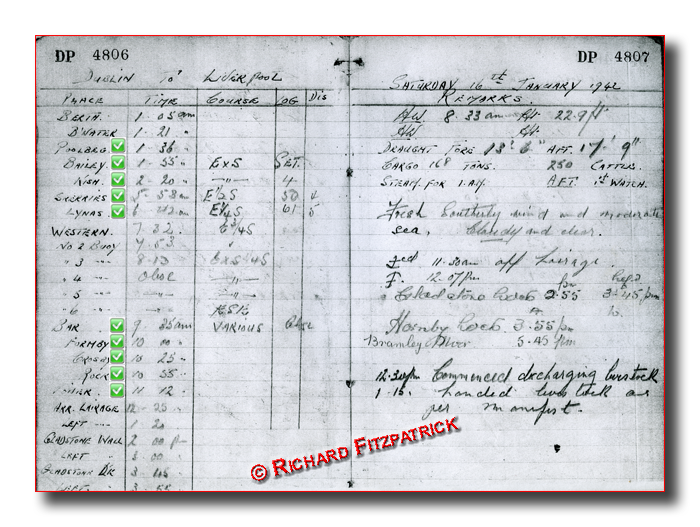 I now see that the entries in the 'Place' column of the log are almost exclusively referring to either lighthouses or light vessels. My extract from Sheet 4072 is too wide to show on the forum so I have uploaded it here.

Apart from the 'Berth - 01:05AM' and 'Breakwater - 01:21AM' entries, I believe I have nailed all the waypoints on the Irish coast. These two are obviously somewhere inside Dublin Port (now probably owned by every Irish tax payer for the next 300 years!).

On the UK side, I am almost sure that the 'Rock - 10:55' and 'Tower - 11:12' entries refer respectively to Perch Rock Lighthouse and Victoria Tower, - both would be passed as the SS Kenmare made her way through Liverpool Docks to arrive at the Lairage (cattle holding pens) at 12:25PM.

What is still not yielding though is the location of the 'Western - 07:32' waypoint and the following five buoy waypoints. I can now see that all six must be somewhere within Liverpool Bay.

If the buoys are marking a minefield as per my earlier supposition, then the field must have been laid as part of a harbour defence measure. I am still not sure if minefields would have been marked by buoys however - it seems a bit counter productive - perhaps the buoys are navigational in nature after all, but then what is the waypoint 'Western' referring to?

You are correct in your assessment of the purpose of the minefields. They were to allow the concentration of anti-submarine efforts in certain areas transited by merchant shipping.

Essentially, there are four types of minefield:


These defensive and protective minefields weren't marked by buoys but the shipping channels through them were. These were swept at least once daily by locally-based minesweepers. Other buoys acted as markers for navigational hazards.

The entry you have circled in green is "Obsc" meaning obscured, probably owing to mist or fog.

I appreciate the clarification - can I ask you what you make of the waypoint entered as 'Western'. It appears to me to refer to the (western) enterance point of the cleared channel, but I may be mistaken. I found an interesting footnote marked by an asterisk in the entry for Wednesday 27th January 1943: 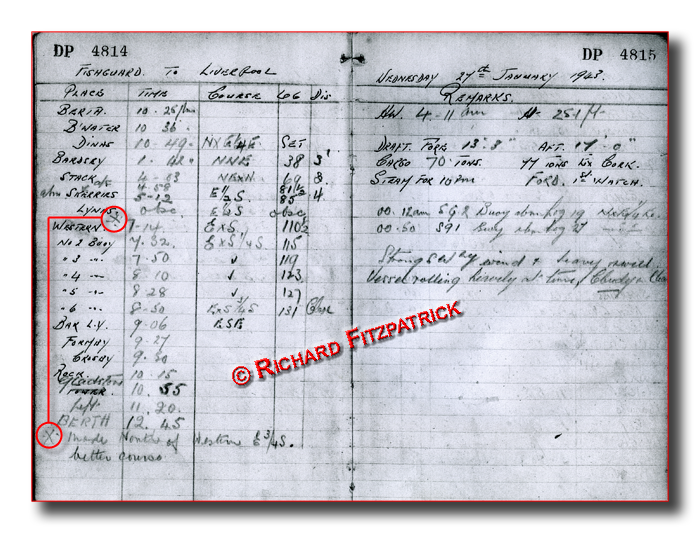 The footnote appears to read:

This would seem to indicate that ships' masters had some choice when they approached the western edge of the minefield.

The fact that three of the six buoys were obscured from view on the 16th January voyage must have been a worrying experience if the purpose was to mark a clear channel through the minefield. I see from this reference that German mines were also present in Liverpool Bay, causing the loss of the SS Munster in the Queens Channel on the night of the 6th/7th February 1940; all crew and passengers were rescued. The Munster was the first Irish ship lost in WWII.

I appreciate the clarification - can I ask you what you make of the waypoint entered as 'Western'. It appears to me to refer to the (western) enterance point of the cleared channel, but I may be mistaken. I found an interesting footnote marked by an asterisk in the entry for Wednesday 27th January 1943:

The footnote appears to read:

This would seem to indicate that ships' masters had some choice when they approached the western edge of the minefield.

The fact that three of the six buoys were obscured from view on the 16th January voyage must have been a worrying experience if the purpose was to mark a clear channel through the minefield. I see from this reference that German mines were also present in Liverpool Bay, causing the loss of the SS Munster in the Queens Channel on the night of the 6th/7th February 1940; all crew and passengers were rescued. The Munster was the first Irish ship lost in WWII.

Wasn't the Munster lost to U30? (yes, confirmed via the link) And there was another 1 or 2 more casualties to this strip of mines U30 laid.

I seem to have an idea there was a lightship far west of the Bar light Vessel (may be getting mixed up with a pilots boat/station). This might be your 7:32 reference. Probably not. But as it is war and with the wish to keep shipping to known, and swept, lanes, could buoys 2 to 6 be markers for such a lane extending eastwards to the bar light vessel? The man who I'd have asked has just died. :-(

Of course, the Formby and Crosby points being landmarks on the foreshore.

Also, this is the first I've ever heard of minefields inside the Irish Sea. I have read of them at the North and St Georges channels in both wars .. but never read of them actually 'inside'. But I don't claim to know everything. That said, I'd be more comfortable with the idea of them being laid there in WW1 and would be quite uncomfortable with the idea that they were there in WW2! I'fd say they were more of a danger to our shipping than Uboats in WW2. [Maybe they were teporary fields laid during the 2 distinct periods Uboats were active inside the Irish Sea [early 1940 and the late war Schnorkel campaign]

These are the B&I boats? The cattleboats? They delivered the cattle/sheep to the Birkenhead side but their usual berth was at Princes Dock.

Sorry I can't help more, it's a long time since I was looking this area of our history up.

p.s. I will go get my MD&HB book out [Western Gateway] and see what approach and channel markings that mentions.
T

Hi SM
I've read the thread properly now. I see the mines laid in WW2 were in response to Uboats in the Irish Sea in early war and during the late-war snorkel campaign. I'm still surprised by this...

The 'Western' station was the pilot station to the 'west' of Liverpool, that's where the 'western' comes from. The ships coming from the Northern Channel picked up the Liverpool pilot at the Bar LV. It was those coming from the south and around Anglessey would meet a pilot boat at this 'western' station and it appears it was eastwards of Pt Lynas. It then makes sense to me that there is a lines of buoys marking a shipping lane straight to the bar LV. Buoys 1 or 2 to 6. This lane would be swept for mines frequently saving them sweeping the complete Irish sea/Liverpool Bay.

I think the missing buoy the man remarked on was a normal event as they did occasionally lose their moorings and wash ashore. He's just keeping all actions and incidents occuring during the voyage noted down in his log.

In Liverpool now is a 'big' pilot boat called the Edmund Gardner. Her forbears would spend a week anchored off Anglessey, recieving and en-shipping pilots from inward and outward vessels. The 'Port Lynas pilot station' is the same thing as the 'Western Pilot station', different names for the same thing. [the pilot boats now are small things that look like lifeboats, they sail out for each ship]

The inspection boat: makes sense to me as the authorities don't know whence cometh this strange boat. If she's from Eire, she may have duties to pay, etc. Plus there's the more warlike roles.

The trip from english port to port was just a normal bit of coastal trade. I note the way the man navigates by landmark along the coast, picking up and marking each point and headland as he passes.
Last edited: Jul 17, 2011
T

The 'Safe War Channel' sounds like your 'line of buoys':

Hello, our family have the original ships wheel to this ship we believe. Photo attached

Hello. Mournes family have the original ships wheel for this shop. Photo attached. It's for sale if your interested

We assume that this ships wheel is from the 2nd SS Kenmare, could anyone provide any details on the salvaging of the ship at all?
B

This wheel is very substantial is 6ft high and very heavy. Name is embossed on the brass centre. It could well be off the original SS KENMARE and would be very valuable. Brian.

C
Cause of death