It’s a pleasure to be in Berlin once again and I thank Chancellor Merkel for hosting these talks today. You may recall, she was the first Head of Government that I visited after becoming Prime Minister in 2016, I think underlining the importance of the relationship between our two countries.

Our partnership is vital in defending our shared values and promoting our interests around the world. We are standing side-by-side in Eastern Europe as part of NATO efforts to reassure our allies and deter Russian aggression.

Our Armed Forces are supporting the Iraqi Government to liberate territory in their brave fight against Daesh in the Middle East.

And in areas such as global health, climate change, clean energy, UK-Germany cooperation has shaped the international agenda.


In our talks today, we have discussed the speech I will give to the Munich security conference tomorrow, in which I will reiterate that the UK remains unconditionally committed to European security - and set out my vision for a unique new partnership between the EU and the UK on defence, information sharing, security and law enforcement.

Because as the threats we face grow and evolve, our structures and capabilities must keep pace.

Whether the challenge comes from North Korea’s attempts to nuclearise the Korean Peninsula or the Islamist terrorists that continue to seek to do us harm.

We must work together and use all the levers at our disposal to keep people across Europe safe.


On foreign policy, we already work very closely together.

Today Chancellor Merkel and I have reaffirmed our commitment to the Iran nuclear deal and the need for full implementation by all sides that we made in October last year. And we agreed that as we continue to work to preserve the deal we also share US concerns about Iran’s destabilising activity in the Middle East.

We stand ready to take further appropriate measures to tackle these issues.

We also discussed the Western Balkans Conference, which I look forward to Chancellor Merkel attending in London in July. 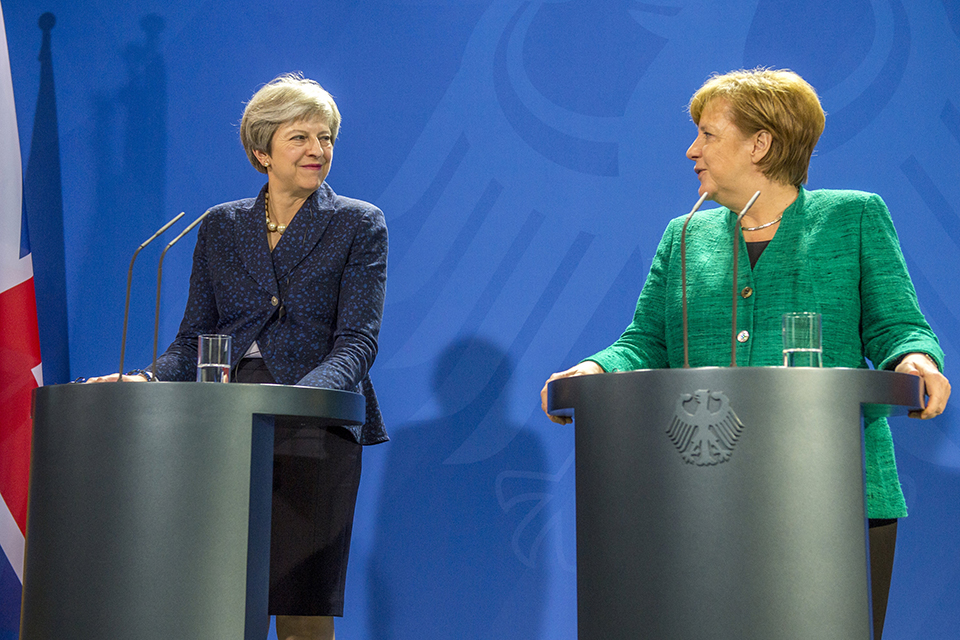 
Of course, it is not only in defence of our shared values that the UK and Germany rely on one another.

Trade between our nations secures and generates hundreds of thousands of jobs in both countries, with hard work, enterprise and innovation at its foundation.

Our proud history of commerce goes back to at least the 12th century with the trade between the Hanseatic cities and English ports.

And it is vital to people in both the UK and Germany that this shared tradition continues.

And so we have referred in our discussions to the UK’s vision for a bold and ambitious economic partnership once the UK leaves the European Union.

I want to ensure that UK companies have the maximum freedom to trade and operate within German markets – and for German businesses to do the same in the UK.

Much progress has already been made in the Brexit negotiations and we both welcomed the agreement reached last December to secure rights for more than a hundred thousand German nationals in the UK and a similar number of UK citizens living here in Germany.

We’re now ready to enter into the next phase of negotiations and our immediate goal is to agree a time-limited implementation period, with the latest round of talks between the UK and the Commission due to begin on Monday.


The UK and Germany’s shared history, values and culture make us vital partners and strong allies both bilaterally and through NATO, the G7 and the G20.

And we will continue to work together to strengthen these ties for years and decades to come.