Book Reviewer
Yeah I know it's the Daily Wail, but...


Daily Wail said:
Al-Qaeda's terrifying vision of a devastated America in the wake of a nuclear attack

Washington is laid to waste. The Capitol is a blackened, smoking ruin. The White House has been razed. Countless thousands are dead.

This is the apocalyptic scene terrorists hope to create if they ever get their hands on a nuclear bomb.

The computer-generated image below was posted on an Islamic extremists' website yesterday. 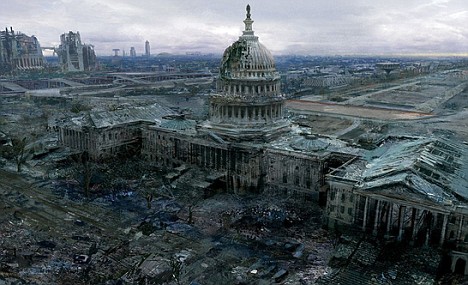 It appeared as rumours swept the Internet that the FBI was warning that an Al Qaeda video was about to be released urging militants to use weapons of mass destruction to attack the West.

The information was said to be coming from 'groups that monitor Islamic militant websites'.

The FBI was quick to point out that it had not issued any warning and that the video was not an official Al Qaeda release through its media arm, Al Sahab, but simply an ' amateur' collection of old footage spliced together and posted on the Internet.

U.S. analysts said a lot of effort had been put into the video - entitled Nuclear Jihad, The Ultimate Terror - with graphics, music, and clips of different leaders and groups.

The same expertise seems to have gone into creating this image of a devastated Washington.

Al Sahab puts out more than 80 'officially sanctioned' videos a year to keep up the propaganda on the West. And the Internet shows how easy it is to stir up militancy. One message with the Washington picture said: 'The next strike's in the heart of America. When? When? When? And How?'

Last night FBI sources said Al Qaeda was desperate to get its hands on a weapon of mass destruction, be it nuclear, chemical, or biological.

So far that is only a dream... or, as this picture suggests, a nightmare.
Click to expand...

If ever anything like this occurred what do you reckon would be the PC brigades response to the deportation of suspected terrorists?
Would they all have a road to Damascus experience or would they still uphold the terrorist human right not to be deported to a country where he may face the type of justice he deserves?

Deport them all to The Good Old US of A, to help with the demolition of whats left.

Moderator
Its an image from Fallout 3 - a forthcoming post apocalyptic PC game!

Book Reviewer
It must be true... from the paper that gave us this: 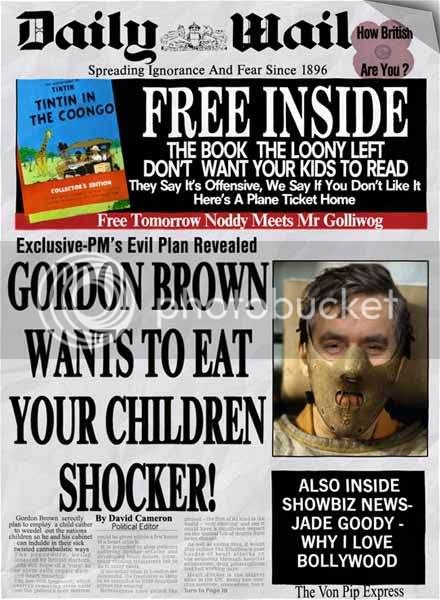 I prefer the original pic of the Whitehouse being burned out in 1814...more realistic...

Book Reviewer
Another great example of "investigative journalism" [sic] by the Daily Wail:

Book Reviewer
The Damascus experience if you recall started with a blinding white light..

At least we gave Dolly Madison time to take the curtains down and save them.
T

And what do Al Queda reckon will happen if they do this ? That the West will lie back and open it's legs ?
Crazy people, don't they study the Koran properly ? Or do they hold the Noddy Goes to Washington version ?
A

I've always wondered what would happen if an attack like this took place. I know very little about contingency plans for nuclear attacks but I assume the most likely response is retaliation in kind, but who do you target if you are attacked by a terrorist group? Or would NATO just turn swathes of the middle east into glass? Either way a lot of innocent people die needlessly. Scary thoughts indeed. :monkey:
K

amazonian said:
I've always wondered what would happen if an attack like this took place.
Click to expand...

I think it's worth a bit of a reality check on what's achievable, noting that there are a range of different potential nuclear attack which are very different from both Chemical and Biological attack.

The type of devastation indicated in that image needs a significant amount of infrastructure behind it, infrastructure that is not easily available to many developed countries never mind a virtualised, and very loosely structured, entity such as AQ.

Chemical attack is very challenging on anything more than a tactical basis, and isn't likely to achieve much more than a Psychological Operations effect, although given the propensity of most of our media that would be quite wqide ranging.

In real terms something like the Tokyo Sarin attack would be quite effective, but the deaths from that were a handful; most of the injuries were a result of crush injuries and panic.

I'd suggest that biological attack would also fail miserably to develop the desired outcome, since it doesn't really, in most cases, have a particularly dramatic delivery.

The Mail could do with some informed military advice, but they're not really interested in the reality of most of the tripe they publish, only in the sales value of the headline.

War with Iran - Another year, another US debacle?