Ministry of Defence said:
As an island nation, the UK’s prosperity and security are dependant on its ability to access the sea. That is why the Royal Navy is globally deployed and has a range of versatile ships, submarines and aircraft operated by professional sailors, aviators and Royal Marines Commandos.
The Navy will be at the London Boat Show from 12 to 20 January, where visitors can learn more about naval life and how, every minute of every day, somewhere in the world they are protecting the nation’s interests. 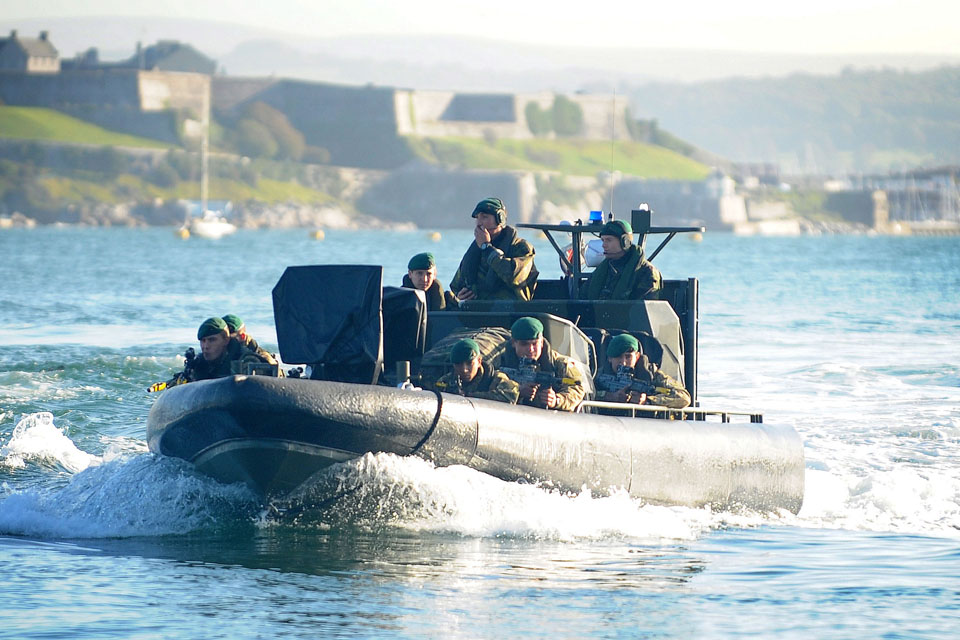 Royal Marines from 45 Commando and HMS Bulwark carry out a beach assault in Plymouth [Picture: Leading Airman (Photographer) Rob Gillies, Crown Copyright/MOD 2012]As well as celebrating the Navy’s rich heritage, show visitors can learn how they operate across a variety of missions from anti-terrorism and counter-narcotics to disaster relief and peacekeeping operations.
The Navy stand will include an opportunity to get up close to an advanced offshore raiding craft (ORC). Measuring 9 metres long and able to travel in excess of 35 knots, the craft were part of the Navy’s commitment to keeping the public safe during the Olympic Games. The ORC can also be equipped with general purpose machine guns, making them a highly-flexible and potent deterrent.
At the Boat Show, a Navy Search and Rescue Sea King Mark 5 will take to the skies beside ExCeL at 1400hrs on Saturday, 12 January, to illustrate what a rescue operation entails. The renowned Mark 5 is now the Navy’s workhorse of choice, operating in extreme conditions and ready to respond at a moment’s notice in an emergency.
A four-man crew from 771 Naval Air Squadron in Cornwall will manoeuvre the helicopter with precision to make a simulated rescue from the dock. The helicopter will return on Sunday, 13 January, for a further demonstration at 1130hrs before heading back to its Cornish base.
At the show, the Search and Rescue crew will be at the C180 stand to meet the public and answer questions about the service, the Fleet Air Arm and the wider Royal Navy. There will also be the opportunity to attend a free daily presentation exploring the role of Search and Rescue.