Royal British Legion is for life, not just Remembrance Day

You're doing fantastic mate - rooting for you!

The Big Day
Well I got all the way around, although nowhere near my target time. Even though I set off with over 3 hours in which to get there before the start, several problems on the London Transport system conspired against me. This meant that the race had already started by the time I arrived at the start point. I now had 2 optionsâ€¦ Bimble along at the back with the slow runners and the fancy dress loonies or do my best to up the pace and elbow my way through the crowds to somewhere near my group. This wasnâ€™t going to go my way whichever decision I made so I opted for the latter.
In retrospect this was probably not the best decision, as by the 17 mile point I may have left the rhinos and giant tomatoes behind but the increased pace was starting to take its toll. I decided to let myself stretch off every 2 miles after the 18 mile point, and eventually crossed the line in 4hrs 30mins 14sec in a very hot and unsteady condition.
I take solace in the fact that I beat Matt Dawson by over 5 mins.
Many thanks to everyone who sponsored me, helping me raise over Â£1,300 to date. The web page is still running for anyone who would still like to donate. Thanks again to everyone who donated. 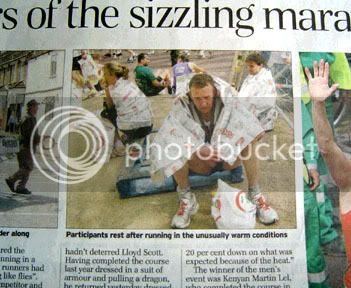 Congratulations & Well Done for a big achievement - both running the 26 miles and raising the money!

Now have a lie down and rest those feet :wink:
You must log in or register to reply here.

The RBL & Scouting for Girls at the Doncaster Race Day!