"The 75th anniversary of the end of the war in Europe provides a timely opportunity to reflect on the sacrifices generations past and present have made to safeguard the lives and wellbeing of others. The role of the Naval College, whether at Dartmouth or Eaton Hall during World War 2 remained as it does today, to develop Courageous Leaders with the spirit to fight and win, whatever challenges we face"
Click to expand...

"
"As the Nation commemorates the 75th anniversary of VE Day on Friday 8 May, the front of Britannia Royal Naval College (BRNC) will be lit up to shine a light on the bravery of all those who served during World War Two.

The College played a key role in the Second World War 2 training Royal Naval Officers, alongside those from Commonwealth and Allied countries, to take their place in the fight for democracy. Among them was His Royal Highness The Duke of Edinburgh, who trained at BRNC in 1939, just before the war began, but with international tensions running high.

In September 1942, the College became a casualty of war itself when it was hit by a German bomb. There was significant damage to the main building but remarkably just one fatality, Petty Officer Wren Ellen Whittall. Casualties could have been significantly higher, but the Germans appear to have miscalculated when the Cadets would return from their summer leave.

As a result, staff and students were evacuated to the Duke of Westminster’s house, Eaton Hall in Cheshire, where on 1 February 1943 the site was formally commissioned as HMS Britannia (Royal Naval College, Eaton).

The war-scarred building in Dartmouth was later taken over by Combined Operations and used to train Royal Marines in amphibious warfare.

On 27 December 1943, the Americans arrived, and the College became the US Naval Advanced Amphibious Base, to prepare for the D-Day landings.

It was one of a number of bases occupied by the US Forces throughout Devon and Cornwall. Known as U Force, the Americans were destined to land on Utah Beach on the Cherbourg peninsula, which closely resembled the South Devon coast.

By the beginning of 1944 over 4,000 US Navy personnel were based in the Dartmouth area. The US troops and their equipment set sail from Dartmouth on 4 June, taking shelter in Weymouth Bay on 5th until the storm abated, reaching Normandy the next day.

BRNC has continued to deliver essential training to its personnel in the current climate, in order to fulfil operational outputs. This means that trained personnel are ready to respond to the evolving COVID-19 situation and provide resilience, while also maintaining key defence outputs. Training continues in line with Public Health England guidance and is kept under review." 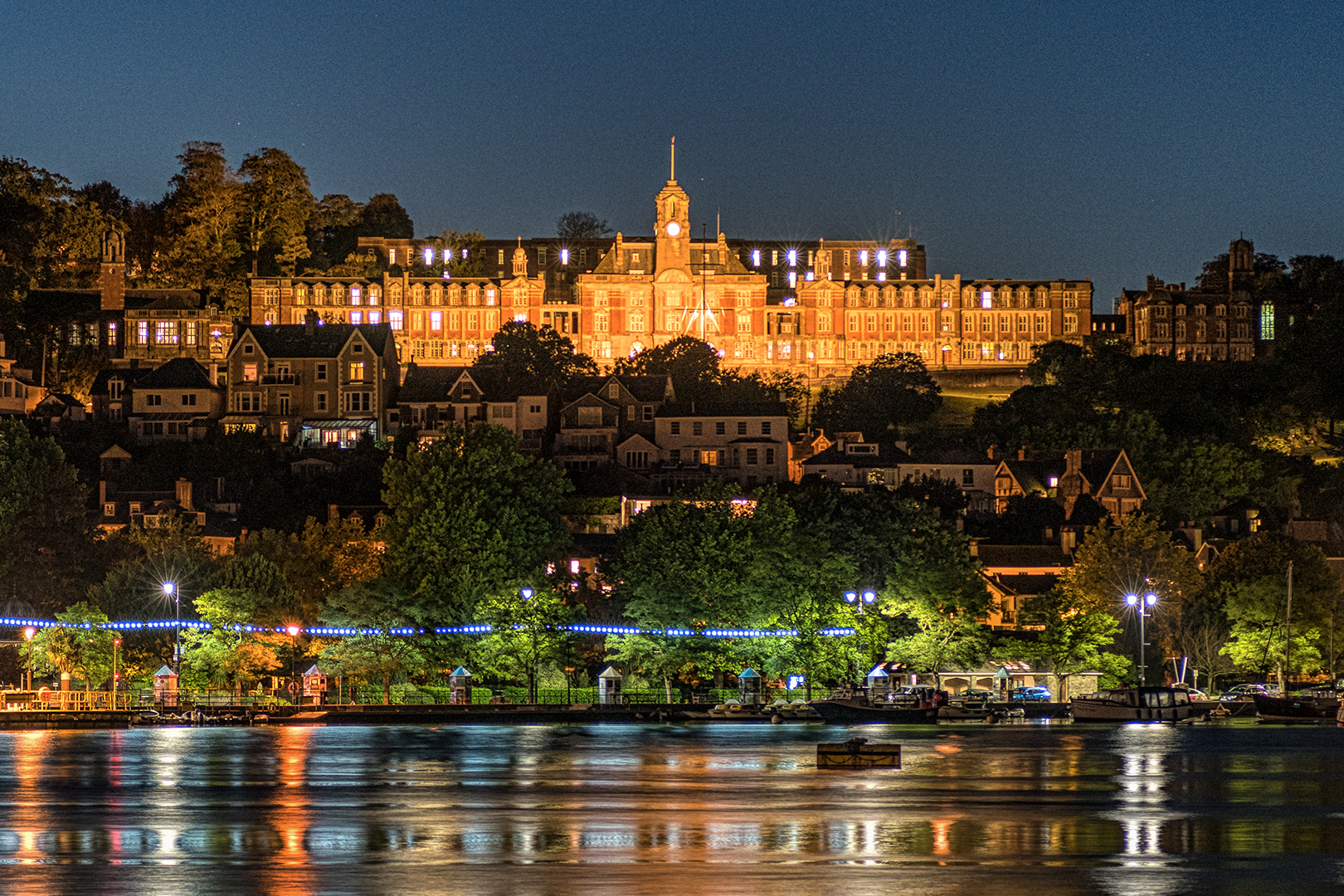 BRNC lights up for VE Day

As the Nation commemorates the 75th anniversary of VE Day on Friday 8 May, the front of Britannia Royal Naval College (BRNC) will be lit up to shine a light on the bravery of all those who served during World War Two.

I forgot to post this on here for VE Day