Pull Up a Sandbag by Jonathan Smiles

Apo-logies for the shameless Plug on the Senior Service Site... yes the book is primarily filled with Squaddie Tales but there are one or two Navy related stories that have found their way into the book - 'the Bunklight Bill', 'Wheelhouse Wallies' and 'The Cresta Run (very kindly donated by Tony Groom author of Diver'). 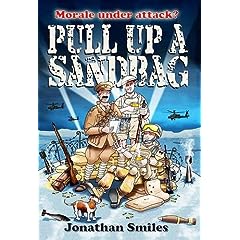 Contributed by military personnel from the British Army, Navy and Air Force, some of the descriptions of the mad, bad and dangerous antics of servicemen on and off duty to be found in Pull Up a Sandbag are enough to scare the living daylights out of the average civilian, whilst others would cause even a hardened RSM to blush â€“ but they will all be recognised as true to life by anyone who has served in the armed forces.

The daft pranks that military types like to play on one another and especially on â€˜sprogsâ€™ and â€˜newbiesâ€™ â€“ the disastrous results of mixing stupidity with lethal weaponry â€“ the havoc caused by the infamous Emperor Mong, who whispers in the ears of unwary servicemen and tells them to do things they will later regret â€“ the misunderstandings between those in command and the men they are commanding â€“ the misfires, mishaps and mistakes â€“ all are recorded here for the readerâ€™s education and amusement.

A humorous treat for all former or serving military personnel and a real eye-opener for inhabitants of Civvy Street, this book is also a fundraiser for the charity Help For Heroes so all the laughter is also for a good cause.

A Pound is being Donated Direct to Help for Heroes for Every Copy sold. A couple of reviews below:

"Pull up a Sandbag is a brilliant collection of bite sized snippets of armed service humour. A perfect bog-book for home or work, or for civvies who wonder what squaddies do when they are not appearing on TV with Ross Kemp. Warning! Don't read this on a crowded bus or train as the resulting fits of hysterical laughter will have onlookers phoning directory enquiries and asking to be put through to the funny farm to tell them to come and collect you. Some spare four-by-two or a small girly pack of tissues is also a must as reading this book will make the air dusty and cause streaming tear ducts. This book can also be considered as a "how-to" manual if you need inspiration for a wind up or decent nickname for the latest numpty that has just arrived from basic. And if you are an ex-squaddie, matelot or crab don't be too quick to sigh with relief if your unfortunate experience, foul up or wah isn't mentioned - there's bound to be a second volume!"
Les Howard, 14 May 2009

Received my copy yesterday so started reading it whilst sitting in Court this morning, the Judge kept raising her eyebrows at me when I constantly let out little chuckles. Martin Avins, 1 May 2009

I took this on nights with me and sat laughing like a loon whilst reading it. I received some funny looks from the others working with me, but when l showed them some of the stories (the navy one by Ancient Mariner being a good example) they joined me in the laughing. A really good book. I look forward to the sequel.
Biggles4221 (ARRSE Forum) 9 May 2009

PULL UP A SANDBAG

We are working on the Sequel at the moment and we are really hoping we can add a few Navy and Marines stories, if anyone has a tale to tell that they think would suit the book can you send me by PM please.

Any stories we add to the book that have been sent by others we will give signed copies of the books to...

Is there anyone in Rum Ration who has read Pull Up a Sandbag yet? if so, could you add your thoughts to the thread...

Many Thanks to all who have bought the book.

Pull Up a Sandbag is now available to purchase on Amazon, there is still time to have a book delivered before Christmas.

We are working on the sequel and would really like to add a few more RN tales to it, if anyone has a story or two to tell that they would like to see in the Sequel please send me a PM...

Many thanks to everyone who has bought a copy, remember a Pound from every copy sold is going direct to Help 4 Heroes...

Here is the link:

Can it only be bought mail order

Backpacker1uk said:
Can it only be bought mail order
Click to expand...

No, it is now also Available on Amazon.co.uk and is in a few Waterstones:

M
The Continuing Story of Our Lad Ricky

Feb 22, 2010
michaelruston
M
B
Secret Britain – The Hidden Bits of our History by Justin Pollard

Picking Up the Brass/Map of Africa by Eddy Nugent

M
The Continuing Story of OUr Lad Ricky