William Hague, Leader of the House of Commons, has today announced 3 days of commemorations to mark the 70th anniversary of Victory in Europe Day (VE Day 70) this summer.

The plans include events across the UK to mark the 70th anniversary of the end of the Second World War in Europe. Events will range from a parade, a service of thanksgiving and a star-studded concert in central London, to street parties around the UK.

Mr Hague, Leader of the House of Commons, said:


I am delighted to announce 3 days of celebrations, which will pay fitting tribute to those who did so much to defend this country and ensure victory in Europe.

It is right that we take time to reflect on the sacrifices made, not just by those in the Armed Forces, but by civilians such as Land Girls and those in Reserved Occupations and make sure that the whole country has the chance to take part in commemorating this momentous anniversary and remembering those who gave so much for our freedom.
​
The celebrations in London will be echoed by other events across the country to mark VE Day 70 with local authorities and communities encouraged to participate. They will celebrate with members of their communities who contributed to the war effort throughout the Second World War. The Royal British Legion, as the national custodian of Remembrance, will act as the government’s key partner in leading the nation in marking the commemoration, including hosting a major reception for 2,000 veterans in St James’s Park.


We are honoured to play our part in helping the nation mark 70 years since the end of the Second World War in Europe. The Legion has a responsibility to help the memories of those of who have fought and died in our nation’s Armed Forces live on for future generations. The commemoration of this conflict, still in living memory, gives us the opportunity to salute the Second World War generation.

We hope that all communities will use the VE Day 70 commemorations to thank them and celebrate the role they played in our nation’s history.
​
Eric Goldrein, 94, from Hale Village, Liverpool, served with the Royal Artillery during the Second World War and was in Italy when the news came through that the war in Europe was over.


We celebrated in a field, the Signallers set up speakers playing music and the locals came out and joined in too, happy that the war was finally over. I heard about the street parties back home and I’m looking forward to being part of these 70th Anniversary celebrations.
​
Read Prime Minister Winston Churchill’s speech to the VE crowds. 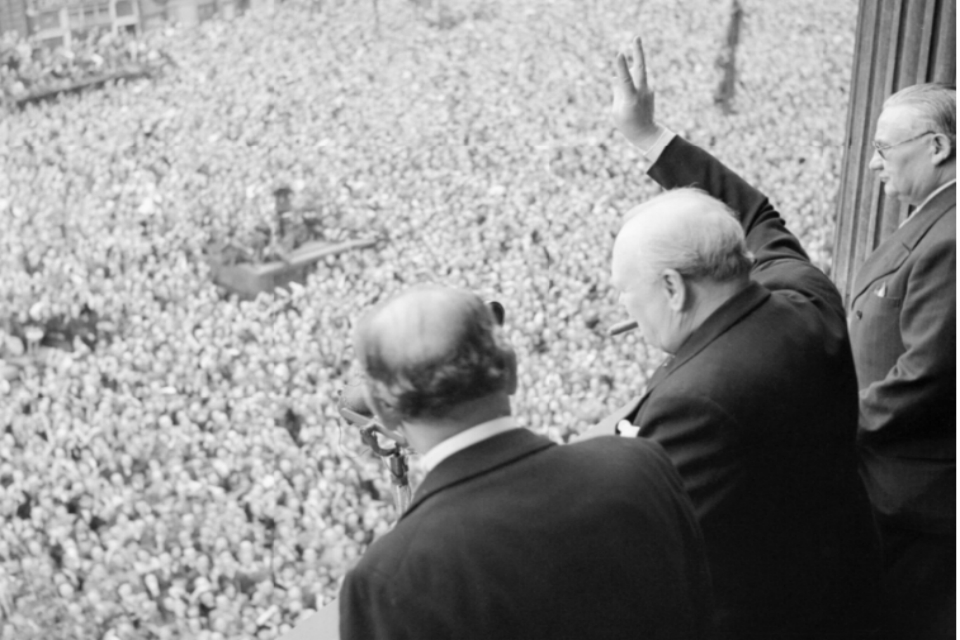 Winston Churchill waves to crowds in Whitehall on the day he broadcast to the nation that the war with Germany had been won, 8 May 1945 (VE Day). [Picture: Imperial War Museum H 41849]
Friday 8 May


VE Day itself (Friday 8 May) will be a day of remembrance. A service of remembrance will be held at The Cenotaph, including a national 2 minute silence at 3pm, marking the moment Winston Churchill broadcast his historic speech formally announcing the end of the war.

The Department for Education will be encouraging schools across the country to observe the 2 minute silence and to celebrate and commemorate in their own way – for example, by reading out Churchill’s historic speech, holding special VE Day-themed assemblies or organising tea parties.

In the evening a chain of over 100 beacons will be lit across the UK. Local communities that have already made plans for the day include Great Yarmouth, Island of Unst, Craig-Y-Dorth, Monmouthshire; Stokesby, Norfolk; and Lowestoft, Suffolk.


Saturday 9 May will be a day of celebration. At around 11am, cathedrals across the country, from Durham to Canterbury, will be invited to ring their bells in celebration.

Festivities will peak with a star-studded 1940s themed concert held on Horse Guards Parade on Saturday night, featuring a line-up of international recording artists, stars and celebrities. The show will be one of the highlights of the year and will be broadcast that evening on BBC One.


A service of thanksgiving will be held at Westminster Abbey, attended by veterans and their families, members of the Royal Family, representatives of allied nations and Commonwealth countries who fought alongside Britain in the conflict, along with other diplomatic representatives and senior members of government and the armed forces.

Following the service, there will be a parade of current personnel and veterans, supported by bands, from the Abbey along Whitehall, past the balcony of HM Treasury where Winston Churchill made his historic appearance before crowds on VE Day. Veterans who have taken part in the service and parade will then be invited to a reception in St James’s Park hosted by The Royal British Legion.

During the afternoon there will be a flypast of current and historic aircraft from the Royal Air Force – including the Hurricane, Spitfire and Lancaster of the famous Battle of Britain Memorial Flight, which played such a famous role in the European War. The Spitfire, with its unmistakable design, won the admiration of many for its daring role in the Battle of Britain, engaging in dogfights in the sky against enemy aircraft in the defence of the nation. The Avro Lancaster is perhaps the most famous of the aircraft used by Bomber Command during the Second World War, used in many raids on enemy territory, including the famous Dambuster Raids on the Ruhr Valley.

Central London will also be transported back to the 1940s by a display of period vehicles from the 1940s in St James’s Park.

Further details on the commemorations, including event listings, are available at https://www.gov.uk/government/topical-events/ve-day-70th-anniversary. Information on how veterans will be able to join in the London celebrations, including how to get involved in the lighting of the VE Day Beacons on 8 May and participating in the parade on 10 May, will be announced shortly.

In the coming weeks, the government will also announce plans to mark the 70th anniversary of VJ Day, which will include a day of major events on 15 August 2015.