85 UK troops from the Engineering and Medical Taskforce in South Sudan have been awarded UN medals by HM Ambassador Alison Blackburne in recognition of their unstinting service in South Sudan.

During their tour, the troops have undertaken projects including support of remedial works to a jetty on the River Nile and helicopter landing sites, flood prevention and other infrastructure improvements, as well as the construction of a temporary field hospital in Bentiu. The field hospital will provide medical care for 1,800 UN personnel, and will be staffed by UK military clinicians for the next 12 months. This will enable other military and civilian staff to carry out the work of the UN Mission in South Sudan (UNMISS), a challenging operating environment.


It is not only about what you have achieved, but also the way you have achieved it. You have conducted yourselves with incredible professionalism in a collaborative and humble manner. It is an honour to present you with such well-deserved medals.
​ 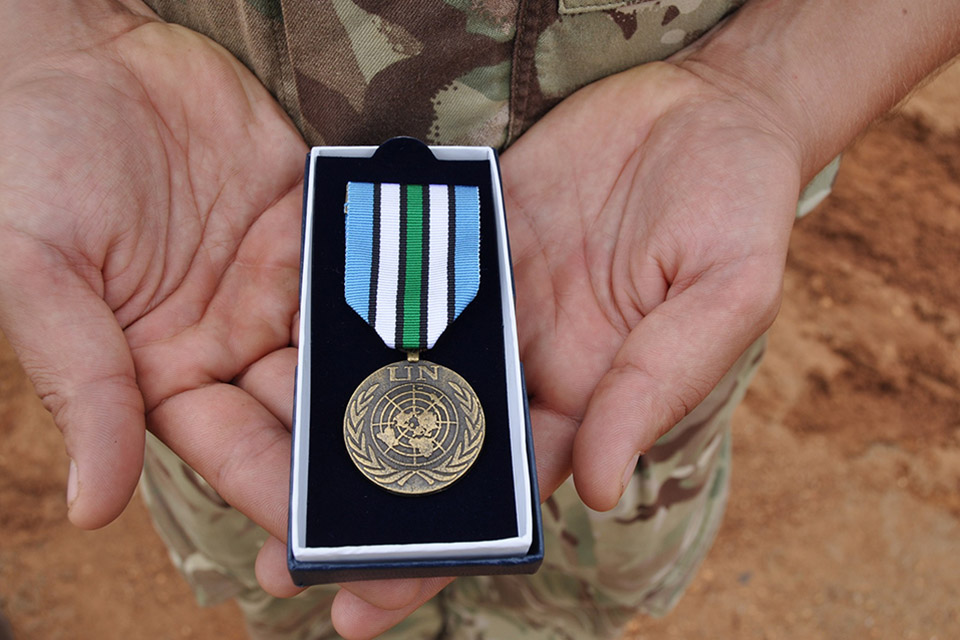 The UNMISS medal which has been presented to troops from Op TRENTON 2 in Juba, South Sudan. Crown copyright.

Commanding Officer Lieutenant Colonel Jason Ainley has now handed over command to Lieutenant Colonel Katie Hislop, who will continue the valuable work of the UK taskforce. Medical staff will continue to provide high class healthcare whilst the Engineering troops now turn to building the permanent hospital, as well as to UN infrastructure tasks including improving supply routes. This work will enable UNMISS to continue to protect civilians in one of the world’s most fragile nations.

Following a commitment made in 2015 by the then Prime Minister to double the UK’s commitment to global peacekeeping initiatives, nearly 400 UK military personnel are supporting UN efforts in South Sudan, making this one of the UK’s largest operational deployments in the world.


It has been an immensely rewarding and humbling deployment. We have achieved far more than anticipated in January. The UK Engineering Taskforce and Medics are now firmly established in UNMISS and we are honoured to be able to receive our hard-earned UN medals from HM Ambassador.
​
Continue reading...