Steel was cut on HMS Medway today at a ceremony in Glasgow. The vessel is one of three OPVs, and part of a programme that has protected more than 800 Scottish jobs. It will be used by the Royal Navy to undertake tasks in support of UK interests both at home and abroad. They are being built at BAE Systems’ (BAES) shipyards on the Clyde as part of a £348 Million contract.

BAES are using the OPV programme to develop new skills and better ways of working that will help with delivery of the Type 26 warship programme – another key component of the government’s £160 billion programme of investment in military equipment.

Defence Secretary Michael Fallon started the computer-guided laser to cut the first piece of hull. Mr Fallon also saw the development of the first OPV and met members of the workforce during a tour of the facility.


These new ships are an important part of the £160 billion we are investing over the next decade in the equipment our armed forces need.

The contract will benefit the dedicated workers of the Clyde, their families and the local economy in Glasgow. And the investment will ensure these shipyards continue to develop into world class engineering facilities at the heart of a thriving British naval shipbuilding capability.
​
Rear Admiral Henry Parker, DE&S Director of Ship Acquisition, said:


The construction of the OPVs embodies the long-term future of the UK’s naval surface ship building industry as they are the key to the continued retention by the UK of its capability to build complex surface warships such as Type 26.

When completed, these ships will go on to perform vital roles in defending the UK’s interests in UK waters and overseas.
​ 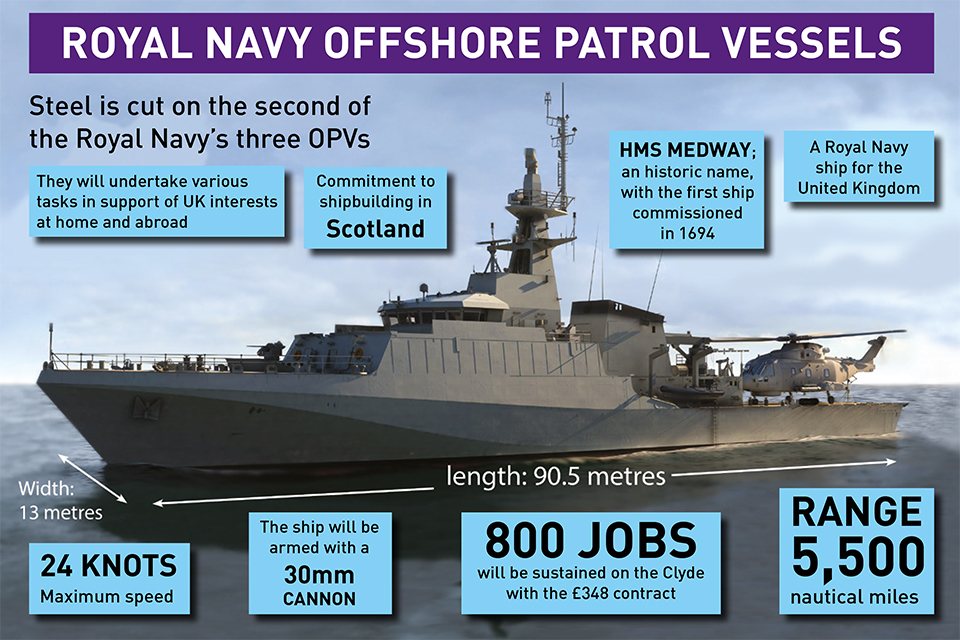 Featuring a redesigned flight deck to operate the latest Merlin helicopters as well as increased storage and accommodation facilities, the OPVs build on the proven capability of the Royal Navy’s current River Class vessels.

There is a long history of the name Medway in the Royal Navy, with the first ship being commissioned in 1694 and a further ten ships going on to bear the name.


Medway has a long and rich naval history and we are delighted that this new vessel will recognise our important maritime links. From the Spanish Armada to the Falklands Crisis, ships built, repaired and manned at Medway secured and maintained Britain’s command of the world’s oceans over many centuries.

The people of Medway, like me, are proud that the area’s name will continue to be linked with the United Kingdom’s naval history.
​
Continue reading...
You must log in or register to reply here.

News story: £278M for two more Royal Navy ships as work begins on the next