Ministry of Defence said:
Foreign Secretary William Hague today welcomed the UAE Foreign Minister, His Highness Sheikh Abdullah bin Zayed Al Nahyan, to the Foreign Office as part of the State Visit of the President of the UAE, His Highness Sheikh Khalifa bin Zayed Al Nahyan.
During a wide-ranging and positive meeting they discussed the strong UK-UAE bilateral relationship, trade and investment opportunities and foreign policy concerns, particularly Syria, Iran and Somalia. The Foreign Secretary also raised the UK’s concerns about the allegations of mistreatment made by three British Nationals who have been found guilty by Dubai courts for possession of synthetic cannabis. The ministers signed new agreements on a National Qualifications Framework and established a Dialogue of Values where areas of common interest and concerns can be discussed.
They noted that the UAE-UK partnership is rooted in common values such as tolerance, religious freedom and the empowerment of women, and discussed how they could continue to work together to promote these values, especially in the context of the tumultuous changes in the Middle East and North Africa. They emphasised the need to oppose the rise in sectarianism and extremism, and reiterated their support for the UAE’s new International Centre of Excellence for Countering Violent Extremism.
Speaking after the meeting, the Foreign Secretary said:

The UK has a long history of friendship and cooperation with the United Arab Emirates. They are an essential ally in a region of critical importance. Over 100,000 British citizens live in the Emirates and we have close ties across many areas including business, education and culture. I am pleased that through agreements signed today we have a new forum to share ideas and foster a better understanding between our two countries across a range of issues, from human rights to shared security challenges. Our countries work closely on Afghanistan and Syria. We share deep concern about the escalating humanitarian crisis in Syria. And we remain fully committed to bringing an end to the repression and human suffering caused by Assad’s brutal regime.
​
His Highness Sheikh Abdullah said:

This State Visit has provided an opportunity both to celebrate the important ties between our countries in a wide range of sectors, and to advance new and innovative avenues of cooperation. In my meeting with Foreign Secretary Hague, we discussed how we can use this historic visit as a platform for further growth in bilateral relations and how the UAE and the UK can work together to tackle the appalling humanitarian disaster in Syria.
​ 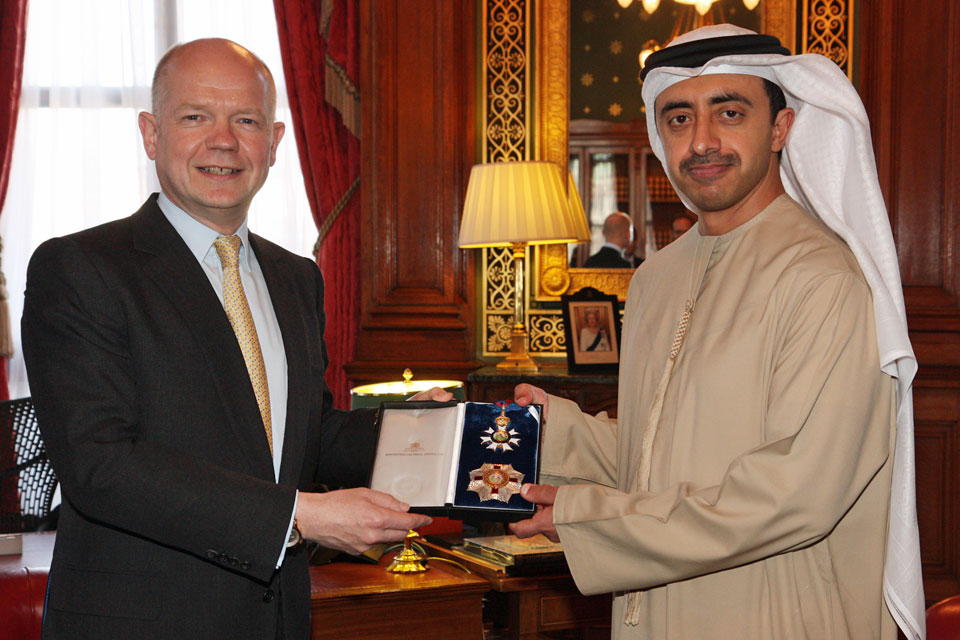 Foreign Secretary William Hague presented an honorary KCMG to His Highness Sheikh Abdullah bin Zayed Al Nahyan.[h=3]Further Information[/h]The UK and UAE today signed a Memorandum of Understanding to create a Dialogue of Values.
The UK and UAE also signed an MOU on a National Qualifications Framework
Read about the UK and UAE joining forces to tackle sexual violence

Press release: Foreign Secretary travels to the Gulf to push for end to Yemen bloodshed