During the week of his 100th birthday, a former Porton Down scientist returned for a surprise and emotional visit – almost 40 years after his retirement. The visit was arranged by his son John and staff at the Defence Science and Technology Laboratory (Dstl).

As a specialist scientist, Gilbert spent his entire working life at the site spanning the Second World War through to the Cold War between 1940 and 1978. His work at the time was cutting edge and involved working mainly in chemical warfare developing respirators to protect troops as well as the civilian population.

He also worked on shark repellents and dispersion involving several sea-going trials in the 1960s. Gilbert’s son, John, says he was a brave man who would often put himself forward for the most dangerous of missions and studies – all in a bid to protect the United Kingdom, its population and its Armed Forces.

As one of Porton’s oldest surviving retired scientists, Gilbert met with the newest Porton Down recruit, engineering apprentice Christopher King, who said:


It was a real honour to meet Gilbert and incredible to hear about the history of Dstl. I love history, engineering and science, so it’s a big deal to meet someone who’s been working on previous technology, systems and science. It’s also amazing to see how much technology has progressed. I only started my apprenticeship in September and who knows – my career could span as long as Gilbert’s.
​
Gilbert was given the VIP treatment, visiting some of the most innovating parts of the Dstl site, including Porton Man, a robot mannequin that helps test the next generation of chemical and biological protective suits for the UK Armed Forces. 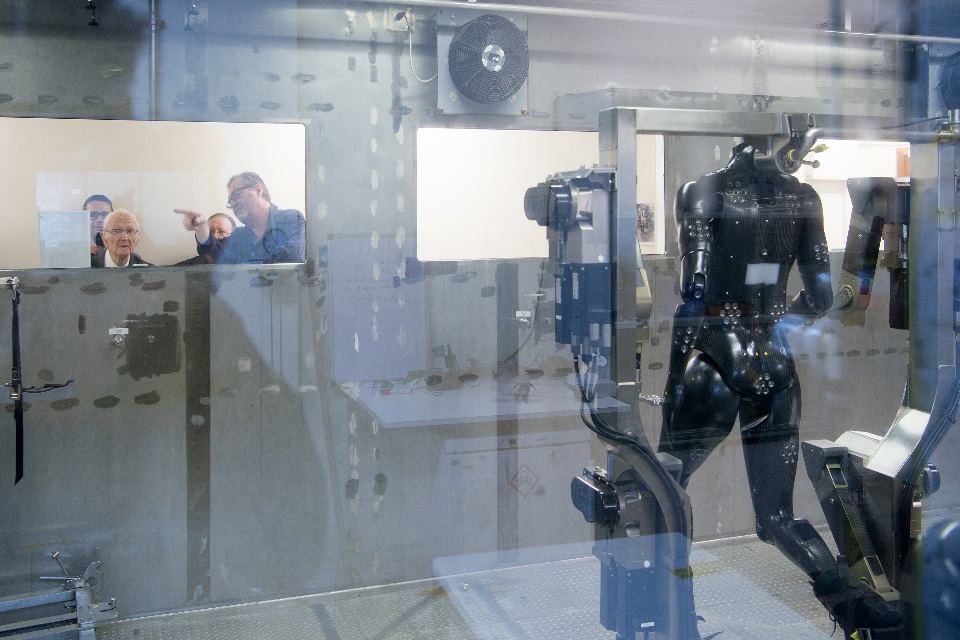 On witnessing how technology has advanced since his time at Porton Down, Gilbert said:


Oh, it’s unbelievable. I never expected so much fuss. I was surprised that my son John had actually approached the station, because I knew it was extremely difficult to come in here – I was really surprised and I’ve had such a marvellous time. It’s tremendously different now from when I was here – I’m amazed to see how much has changed. The work that is done now to protect the UK is incredible – there is no question about its importance.
​
Many of the scientists were extremely excited by the visit and were keen to hear about the legacy work that Gilbert was involved in.

Colin Willis, a Principal Adviser in Chemical Protection and Detection at Dstl, said:


It was an absolute pleasure to meet Gilbert and to have spoken to him, and particularly to hear some of his stories. We shouldn’t forget that without a lot of the research done by Gilbert and his generation we would not be able to do much of the work we do today. The work he did was essential and we are using the results of that to help provide better defence for the UK Armed Forces.
​
Gilbert was presented with a framed certificate of appreciation for his contribution to science, as a well as a signed book about the history of Porton Down. It was indeed a special day for Gilbert, who was visibly moved at the end of his visit.