An Aberdeenshire MP has called on the re-establishment of the Royal Navy university reserves in Aberdeen.

The first University Royal Naval Unit (URNU) was established in the city in 1967 and was still training 58 students when it was moved to Edinburgh in 2012.

West Aberdeenshire and Kincardine MP Andrew Bowie trained with the unit as an Aberdeen University student, before entering life at sea as a Royal Navy officer.

The Conservative MP has now been told the Senior Service is conducting a review of all 15 URNUs and he is backing the unit’s restoration along with training vessel HMS Archer.

In response to his parliamentary question, asking whether the Ministry of Defence will review the decision, minister of state Anne-Marie Trevelyan said that a “geographical footprint will be considered” in a current review.

She said: “A review of all University Royal Naval Units (URNUs) is being conducted by the Royal Navy to consider how the organisations are governed and managed, while examining the objectives of the URNU and the way they deliver the maritime experience. Geographical footprint will be considered as part of this review.”

Mr Bowie said: “I have long argued, since the day since its relocation, that Aberdeen needed its own URNU.

“The end of Aberdeen University Royal Naval Unit left a major port and huge swathe of coastline without a permanent naval presence.

“It isn’t just about training people for public service. These units instil discipline, promote leadership and teach many other skills essential to many walks of life.” 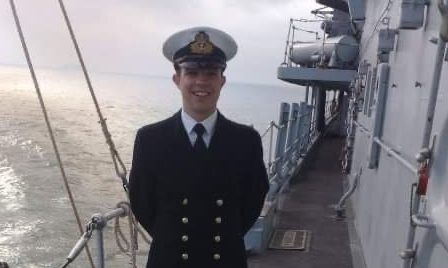 An Aberdeenshire MP has called on the re-establishment of the Royal Navy university reserves in Aberdeen.

Andrew Bowie in his navy days

How about a little quiz - what ship is that above - appear to be torpedo tubes above and behind him - I have'nt served on a ship with these ( I don't think?)

Based on the width of the passageway behind him and the deck above with the tubes on I reckon it’s a 42. The tubes are decoys and (DLF?) I think behind him is the berthing ladder in the position for use.

Link to a picture of a T42 showing similar structure and fittings and a stowed accomodation ladder.