Our search for information

I managed to find a list of ships he served on.

The main ships he served on were:-

HMS implacable ( crashed a plane on the deck and into the sea, servived un-injured)

Appointed lecturer in Naval Aviation at the Royal Naval College,
Greenwich. Promoted to Lt. Cdr. (Apparently the youngest Lt. Cdr. in the
Navy at the time).

Any information on these ships or my grandfather would be much appreciated.
Last edited: May 21, 2020
S 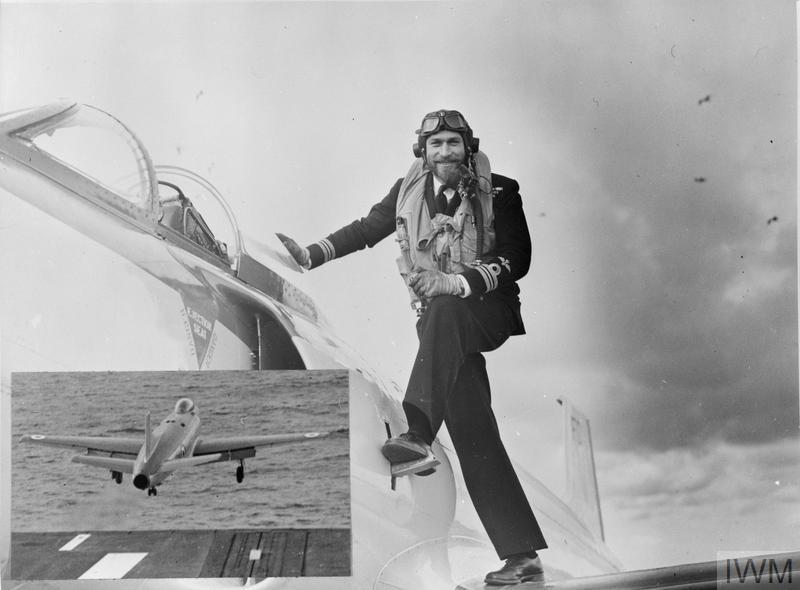 Lieutenant Commander John Marshall Glaser, DSC, RN, the first pilot to fly a jet from the EAGLE, about to climb into the cockpit of his Attacker jet fighter. Inset, the Attacker becoming airborne before it reaches the end of the flight deck.

Ah yes I got the the ships mixed up. It was Eagle the flight happened.
K

As upsetting as this is to write we finally managed to find my grandfathers item going up at auction.
But as this cruel world is we couldn't get them back.
We are still looking for his dress sword and the possibility that we could get the photos of him and his flight logs back.

Very very sad day for my mother and I.

Kevin, that’s a real shame. I wish you luck with continuing to build the picture of your grandfathers time in the service. I’ve got a recent copy of Theo Ballance’s “The Squadrons and Units of the Fleet Air Arm” which obviously confirms the dates of him being CO, but doesn’t shed much more light. If you haven’t got a copy, I’d recommend buying one as it’s amazing for FAA research. Also join Tim Brown’s Facebook group called My Unofficial FAA History Page https://www.facebook.com/pg/FAAHistory/about/?ref=page_internal#
you could dig up some gold there by way of photos, documents, advice etc.
M

Not so much war records, but I can trace John Marshall Glaser 1920 - 1953 back through his Glaser family (His father, Herbert Glaser, was son of Henry (Heinrich) Glaser from Czechoslovakia.

Henry's father was Jakob Glaser - and this is my branch of the Glaser family. It is immense.

If you are interested to know more please mail me at

Finally found out where i caught the bug!