The grave of 2nd Lieutenant Lawrence Paul Strawson was rededicated at a moving ceremony today at Calonne Communal Cemetery, Belgium. The service was arranged by the MOD’s Joint Casualty & Compassionate Centre (JCCC) and led by the Reverend Justin Bradbury, Regimental Chaplain, The Queen’s Royal Hussars.

2nd Lieutenant Strawson was killed on 21 May 1940 fighting a desperate rear-guard action in Calonne, Belgium. They had spent the night being relentlessly and heavily shelled by German forces, who threatened to envelop their reserve companies, when their Commanding Officer, Lieutenant Colonel Baker, decided to lead a daring but risky counter-attack. He assembled around 50 men from HQ, which included the signals officer, 2nd Lieutenant Strawson. The force set off for the ridge that lay between Calonne and HQ at Warnaffles Farm. Even before they reached this point, they came under heavy artillery fire and suffered many causalities. The survivors continued firing until their ammunition ran out. It was only when night fell many hours later, that these few remaining survivors were able to crawl back to HQ. This attack was the last time Lawrence was seen alive.

2nd Lieutenant Strawson was born on 3 December 1915 in Nice, France but grew up in Surrey. He enlisted in the Territorial Army in January 1937 and joined the Artists’ Rifles as a Private. He was granted an emergency commission as 2nd Lieutenant on October 1939 and was posted to the 8th Battalion Royal Warwickshire Regiment and sent to France on 11 January 1940. Tragically, on 21 May 1940, he was listed as “missing presumed killed”.

Lawrence’s burial place had remained unknown, until the grave of an unknown 2nd Lieutenant buried in Calonne Cemetery, Belgium was brought to the attention of the MOD. After extensive historical research into this unknown grave, it has been agreed by the MOD’s JCCC that this grave is that of 2nd Lieutenant Lawrence Strawson. 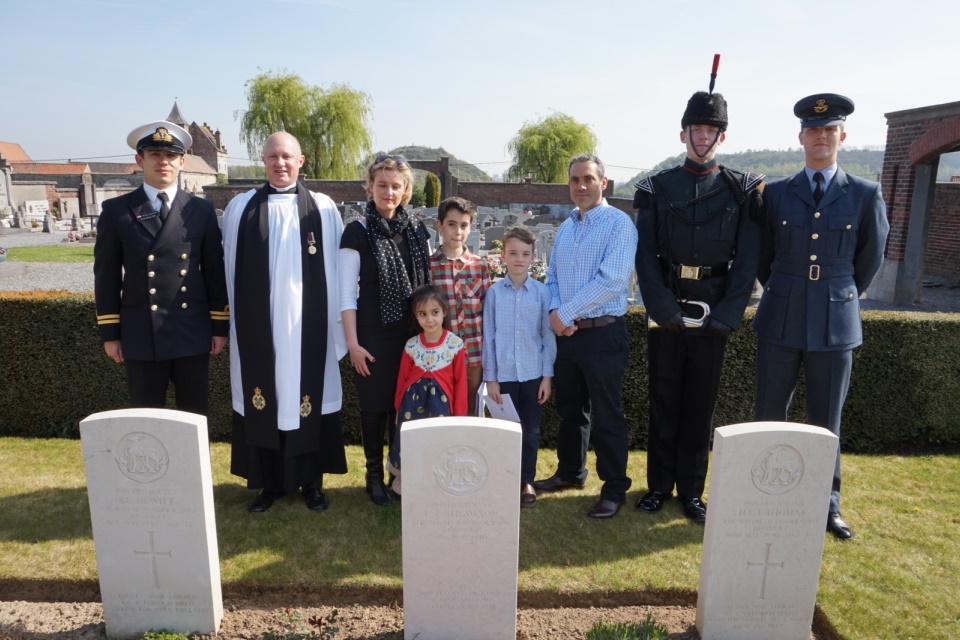 Gt Niece, Julia Cottam and family with those conducting the service, Crown Copyright, All rights reserved

The great niece of 2nd Lieutenant Strawson, Julia Cottam, was able to attend the service with her family, and said:


It was an honour to be able to represent my family here today and finally put a name on my great uncle’s headstone.
​
Nicola Nash, from the Joint Casualty & Compassionate Centre (JCCC), said:


It has been a privilege to commemorate this brave officer who gave his life for his country. Today has been made even more special by having members of his family attend.
​
Continue reading...