The graves of 6 brave Royal Air Force (RAF) crew members, who lost their lives when their 2 Bristol Blenheim aircraft were shot down by enemy fire during World War 2, have been identified over 70 years later. A moving ceremony on 25 October at the Commonwealth War Graves Commission’s (CWGC) Choloy War Cemetery, France, saw the graves finally rededicated in their name. 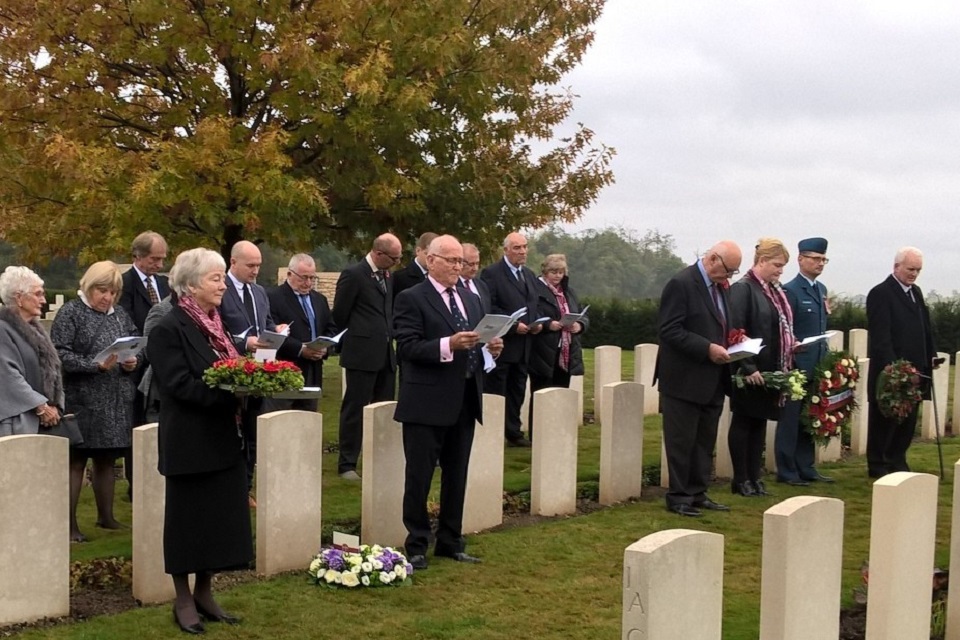 
In all my years in military chaplaincy this is the first opportunity I’ve had to take part in a ceremony like this. It is an absolute privilege to walk this final stage of their long journey with these families.
​
Louise Dorr, from the JCCC, said:


It has been wonderful to be able to reunite these 5 families with their lost relatives. The fact that so many of them are here with us today has made this morning’s service particularly poignant.
​
Blenheim P6926

The Blenheim P6926 aircraft was lost without trace on 14 May 1940 whilst on a sortie in the Sedan area of France. Local residents at the time reported that it was hit by enemy aircraft and crashed vertically near a small lake (Etang de la Fenderie).

The crew were buried together nearby in the village of Vrigne-aux-Bois until 1946 when they were re-interred to a communal grave in Choloy War Cemetery. More recently a member of the French public submitted a French Red Cross report about a crash at Vrigne-aux-Bois; an independent expert has been able to confirm that the aircraft referred to in that report was a Blenheim. All other Blenheims lost on 14 May 1940 have been accounted for; by elimination the aircraft lost at Vrigne-aux-Bois was Blenheim P6926. 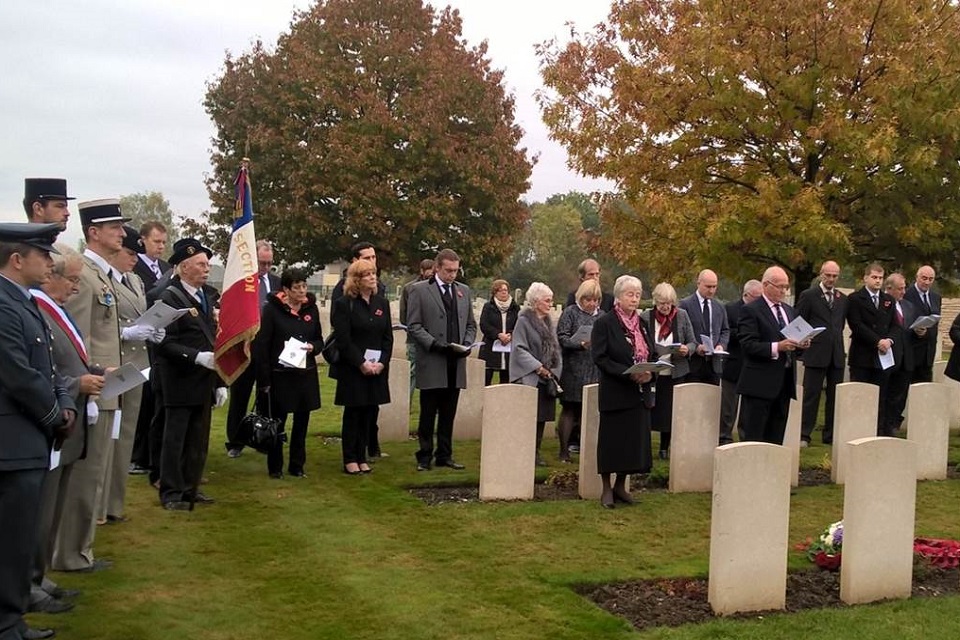 Flt Lt Peter Hawks was born on 19 May 1914, the son of George and Katharine Hawks. He was married to Elizabeth Hawks and they lived in Salisbury. They had a son, Anthony, who lives in the Bristol area and attended yesterday’s service with his family. Anthony feels incredibly lucky and amazed that after many years have passed he now knows where his father’s final resting place is.


After 76 years it was a privilege to be at the ceremony to honour my father and his crew. To finally have closure with so many other relatives made it even more special. It was a moving ceremony.
​
Sgt Frederick Evans was the son of Frederick and Annie Evans of Griffithstown, Monmouthshire. He was aged 29 when he died. His nephew and niece from South Wales attended the service.

AC1 Clifford Shaw was the son of Percy and Ellen Shaw of Wraxall, Bristol. Two of his cousins together with their families were traced in the Bristol/Bath area and travelled to France for the service.


Crew members of Blenheim N6210 were:

The Blenheim N6210 aircraft was also lost on a sortie in the Sedan area of France on 14 May 1940. After the crash, the crew were buried locally, then re-interred after the war in Choloy War Cemetery, where they have lain as unknown airmen ever since. Research into Commonwealth War Graves Commission data about three “unknown” aircrew buried in Choloy War Cemetery revealed that one held the rank of Pilot Officer and another was found with a cigarette lighter engraved with the initials “D.A”. The only aircraft lost in May 1940 with both a Pilot Officer and a crew member with the initials “D.A” was Blenheim N6210.

P/O Stephen Rose was born on 20 May 1915 in Alberta, Canada, the son of Dr William Rose. He was accepted in Canada for a Short Service Commission with the Royal Air Force. Sadly, it has not been possible to trace any family for him.

Sgt David Ashton was the son of David and Isobel Ashton of York. He was aged only 19 when he died. His nephew, great nephew and great great nephew from York attended the service.

LAC Ernest Edwards, from Co Durham, was the son of Ernest and Elizabeth of Wingate. Several different branches of his family were traced and attended the service.

New headstones bearing the names of the 6 RAF crew men have been provided by CWGC, who will now care for their final resting place in perpetuity.