News story: World War 1 soldier who was killed in the Battle of the Somme finally laid to...

Private Henry Parker, 5th Battalion The Yorkshire Regiment, has finally been laid to rest after he was killed in action during the Battle of the Somme on 26 September 1916, just 3 days short of his 23rd birthday. The burial, with full military honours, took place on Wednesday 17 May 2017 at the Warlencourt British Cemetery, near Arras, France. 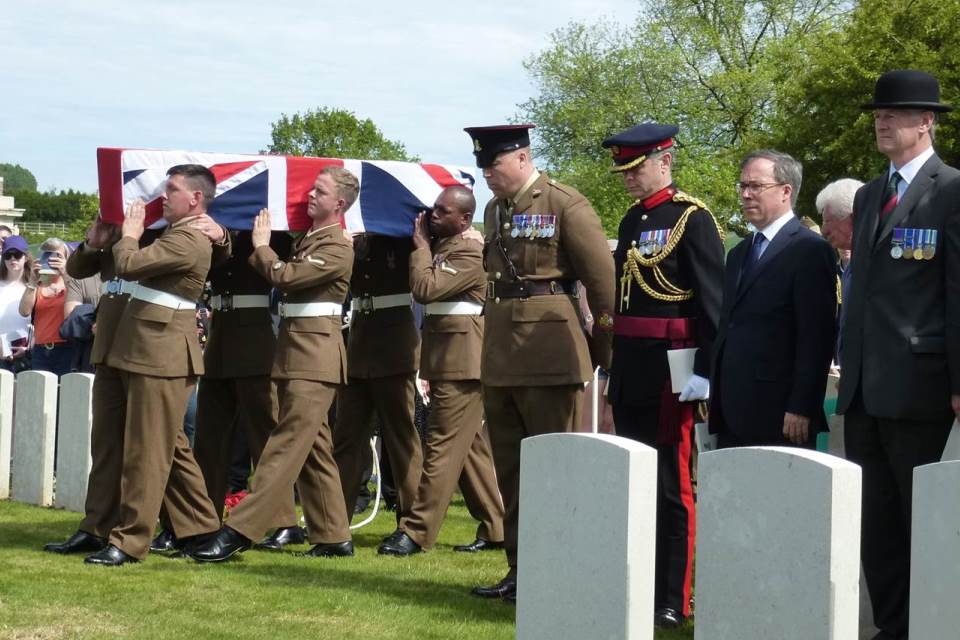 The service, organised by the MOD’s Joint Casualty and Compassionate Centre (JCCC), part of Defence Business Services, was conducted by The Reverend Jonathan Wylie CF, Chaplain to the 2nd Battalion The Yorkshire Regiment.


It has been an honour for the Joint Casualty and Compassionate Centre to organise today’s ceremony and to ensure this brave soldier has been buried with the dignity and respect he deserves. It has been a privilege to have met Private Parker’s family and to personally involve them with the planning of his burial.
​
The greater part of Private Parker’s service was holding the frontline with his Battalion in the Ypres Salient area. It was not until August 1916 that his Battalion was redeployed from Flanders, along with the other units of the 50th (Northumbrian) Division, to the Somme. Private Parker was killed during an incremental advance towards the ‘Flers’ enemy trench from the ‘Starfish’ line on 26 September 1916. Henry’s body was never recovered from the battlefield until remains were found in a farmer’s field almost a century later. 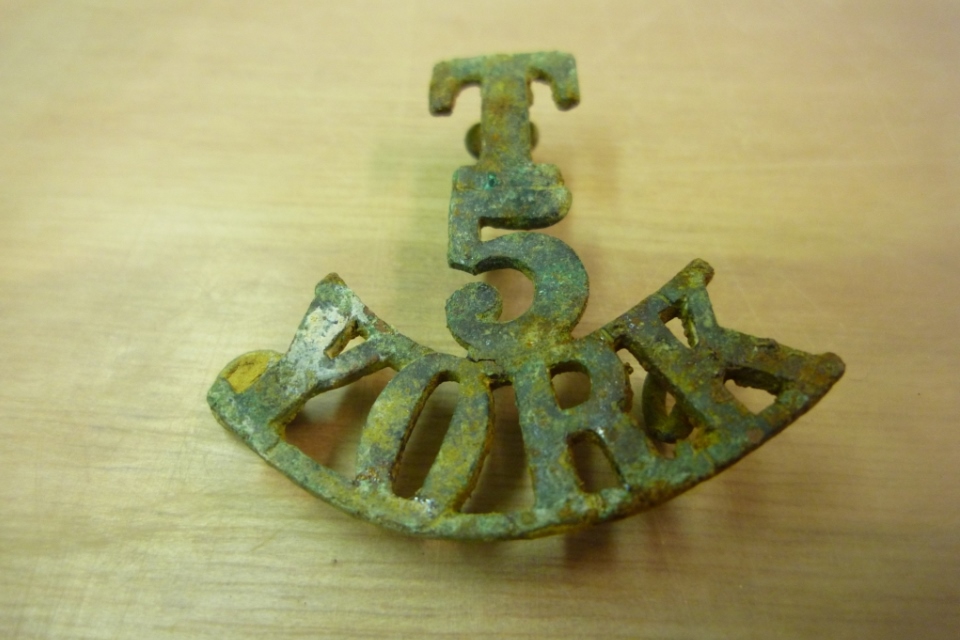 Henry’s brothers James and Thomas Parker, who had both seen active service during the Great War, returned home safely.


It is a great honour for us to be here today to pay our respects to a Great Uncle, Private Henry Parker. We are also here to represent Hazel Ranaldi, nee Croft, the daughter of Rosina Parker who was Henry’s sister.


We would like to thank the Joint Casualty and Compassionate Centre of the Ministry of Defence for inviting us to the burial ceremony here in Warlencourt, and feel very humble to be part of this occasion and extremely proud of our Great Uncle.
​
Margaret Parker, niece of Private Parker, who was unfortunately unable to accompany the other 20 family members to the ceremony, said:


Since the news that Uncle Henry has been found, I have had the honour and privilege to not only catch up with relatives I did know but also to meet others for the first time when I went to Richmond. We have been brought together through the brave actions of Uncle Henry, who, 100 years ago, gave his life for us and all that we hold dear.


I would like to thank all who have been involved, having given time and unstinting efforts to reunite Uncle Henry with us, his family, and bring us some closure. My thoughts are with you today, when I will be in Wansford Church thinking about Uncle Henry, our family and all those who have guided and supported us on this journey. God bless you all.
​
In 2014, the remains of Private Parker were discovered in a farmer’s field situated on the outskirts of Matinpuich, Nord-Pas-de-Calais, France. The military insignia recovered with the remains was key to the eventual identification of this soldier.


We are incredibly proud to have played our part in helping identify this member of the regimental family after so many years. What’s followed has been a fascinating journey into local and family history research, capturing the interest of a range of people along the way who all want to understand more about the world in which Henry lived and the circumstances in which he died. It has been an honour to meet them all and work together to give Henry the resting place he deserves.
​
Having received formal notification of remains being found, the JCCC undertook genealogy and historical research with The Green Howards Museum in an attempt to discover a potential identity. A shortlist of 12 possible names was identified and JCCC was able to trace surviving relatives of all 12 families and arrange DNA testing. In February 2017, the news came through that Francis Storry, a great-nephew of Private Parker, had been confirmed as a surviving relative and the identification of Henry Parker was confirmed. 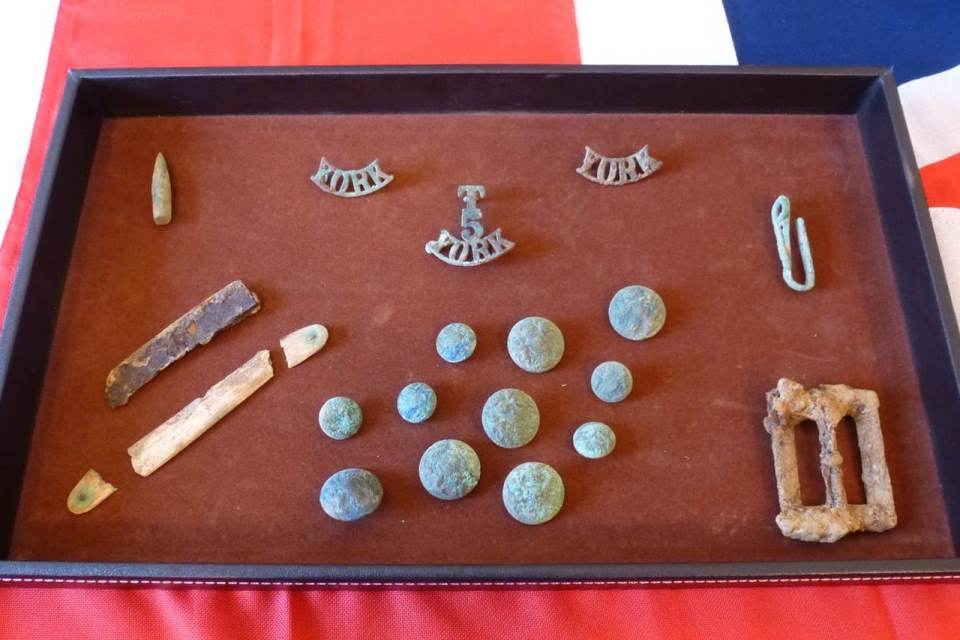 The recovered artefacts belonging to Private Parker that led to his identification, Crown Copyright, All rights reserved

Soldiers from the Yorkshire Regiment provided the bearer party and fired a salute at the service. 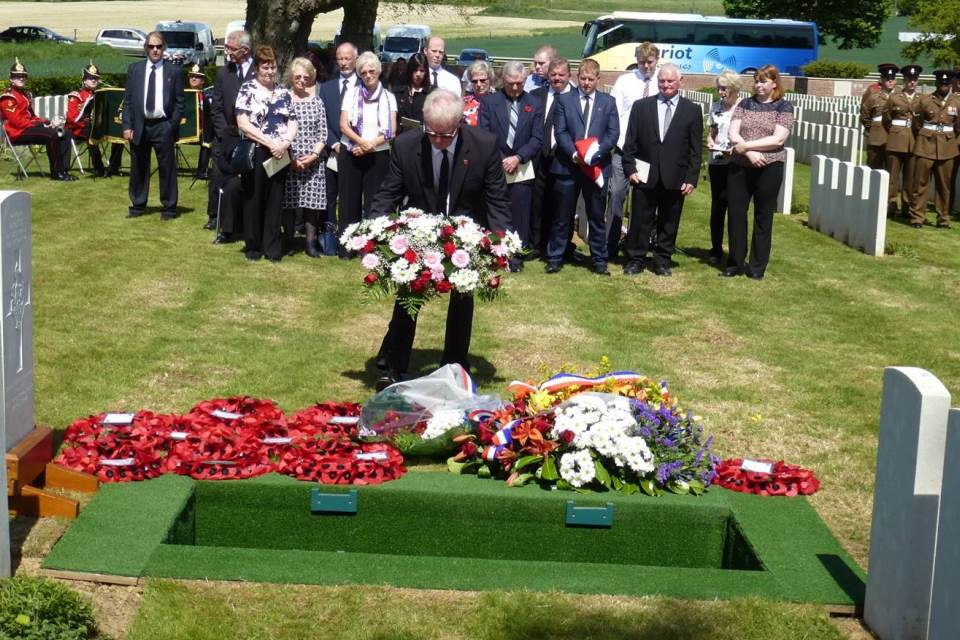 
When we got the letter from the MOD Joint Casualty and Compassionate Centre, we were very surprised as we didn’t know anything about Henry Parker. It’s a great honour to be here today with 20 family members to pay our respects.
​
Lt Col David O’Kelly, Regimental Secretary of The Yorkshire Regiment said:


The Yorkshire Regiment is immensely proud to be able to lay to rest one of its brave soldiers, even 100 years on from the war in which he was tragically killed. He was an inspiration to his comrades then, and is still an inspiration to those who serve in the Regiment now. We will remember him.
​
A new headstone bearing Private Parker’s name has been provided by the CWGC, who will now care for his final resting place in perpetuity. 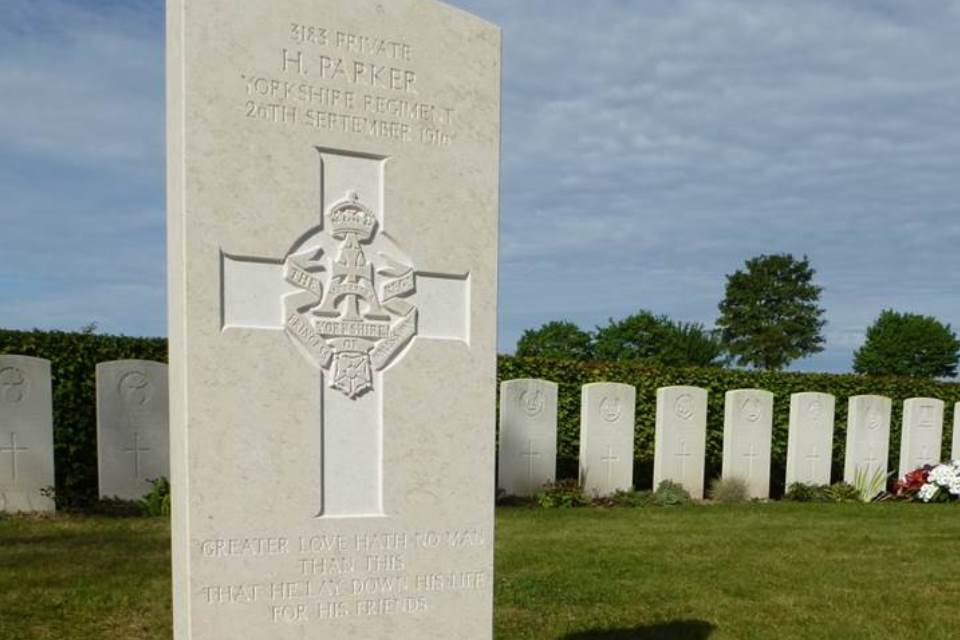 
Today’s service is a poignant reminder of the human cost of the Great War. Henry has been given the honoured burial he so richly deserves and it is a privilege that we can care for his grave, and those of his comrades, at this cemetery and thousands of others across the world in perpetuity. In doing so, we will ensure they are never forgotten.
​
Continue reading...