At a moving service yesterday at Villers-Bretonneux Military Cemetery, France, a new headstone was dedicated to Lieutenant William Frederick MacHutchison, originally from Belfast. The service was arranged by the MOD’s Joint Casualty & Compassionate Centre (JCCC) and led by the Reverend Justin Bradbury, Regimental Chaplain, The Queen’s Royal Hussars. 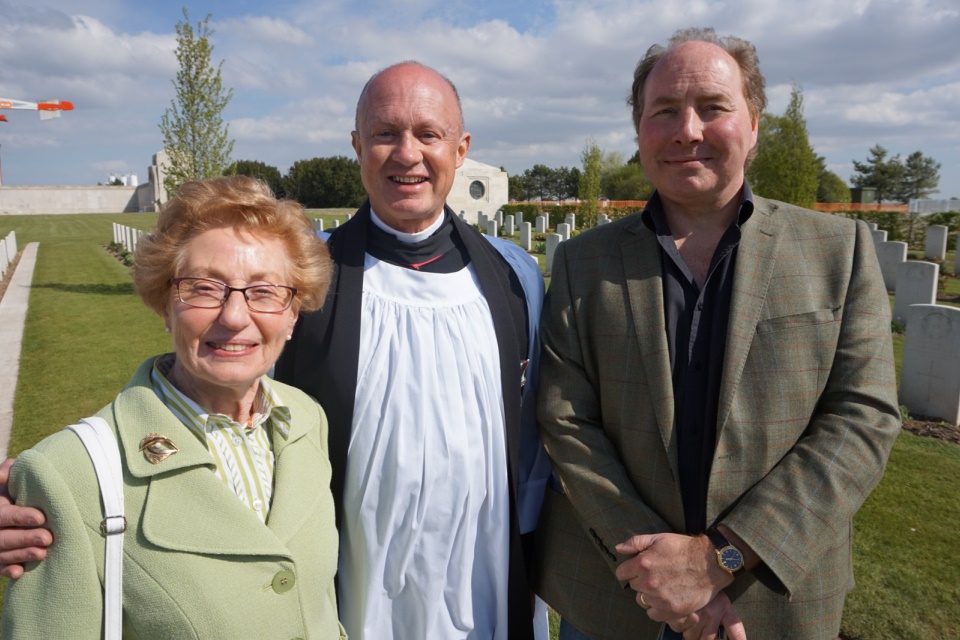 William Frederick MacHutchison was born in Belfast on 16 October 1893, and was the son of John and Jane MacHutchison. He had 2 brothers, George and John, and 1 sister, Mary. William was educated at St. Andrew’s College, Dublin and went on to work for the Honk Kong & Shanghai Banking Corporation (HSBC).

William saw extensive service during World War 1. He enlisted in the Royal Dublin Fusiliers in 1915 and joined the 7th battalion in Egypt. He ended up spending 2 months at the Red Cross hospital in Giza after contracting a severe stomach infection. He re-joined his battalion in Mudros, where they moved on to Salonika. At this point he was appointed Acting Quartermaster sergeant to 30th battalion Infantry Brigade HQ. After spending time in Malta, William received a gunshot wound at Struma Valley in the Balkans in late 1916, which meant he was transferred back to the UK.

It wasn’t until November 1917 that he was declared well enough to return to action, where he joined the 8/9th battalion in France. When the 8/9th battalion were disbanded in February 1918, he became part of the newly formed 1st battalion. On the 27 March 1918, William was injured during fighting at Morcourt. He was taken to the nearest dressing station at Lamotte, where he tragically passed away a few days later.

William’s burial place had remained unknown, until the grave of an unknown Lieutenant buried in Villers-Bretonneux Military Cemetery was brought to the attention of the Ministry of Defence. After extensive historical research into this unknown grave and the circumstances surrounding Lawrence’s death, it has been confirmed by the MOD’s JCCC that this grave is that of Lieutenant William Frederick MacHutchison.

The great niece of Lieutenant MacHutchison, Sandra Harper, was able to attend the service with her son, Colin, and said:


It was a very monumental occasion and something I never envisaged would happen. I feel privileged and honoured to have attended something I felt I had to do for generations gone.
​
Rev Justin Bradbury said:


To make this pilgrimage in holy week to enable others to honour the memory of Lieutenant MacHutchison has been a singular privilege.
​
Nicola Nash, from the MOD Joint Casualty & Compassionate Centre (JCCC), said:


This service was made especially poignant by having Lieutenant MacHutchison’s great niece, Sandra, and great great nephew present. They had travelled from Belfast for the ceremony. It is lovely to have so many nationalities buried together in such a beautiful ceremony.
​
Continue reading...