What’s the best moment of the week? It’s got to be Friday night hasn’t it, knowing you’ve got the whole weekend ahead of you to do just what you want, when you want. Whether it’s smashing a new track on your bike, or just busting a box set on your sofa, you’ve got a whole 48 hours ahead of you with no-one in your ear or on your back.

But for lads like Matt McCallen, Robert Sullivan, Hassan Raza and Ed Norman who are training to become Royal Marine Reservists, the weekend is different.

No one gets a green beret for nothing. So these guys know, that as well as keeping normal lives going as physios, plumbers, lawyers, property developers, there’s even an astrophysics professor in their unit, they also have to put in the hard yards if they ever want to earn the right to put on the coveted green lid. Which means that on a training weekend the wives and girlfriends have to be put on hold till Sunday night.

Instead of snuggling down in a king size bed they’ll be sleeping in shifts in freezing conditions under wet leaves, melting into the landscape while keeping an enemy helicopter under observation, getting up at first light to speed march six miles in an hour carrying 21 pounds of webbing and a rifle, and learning the fine art of fighting as one of Britain’s elite. 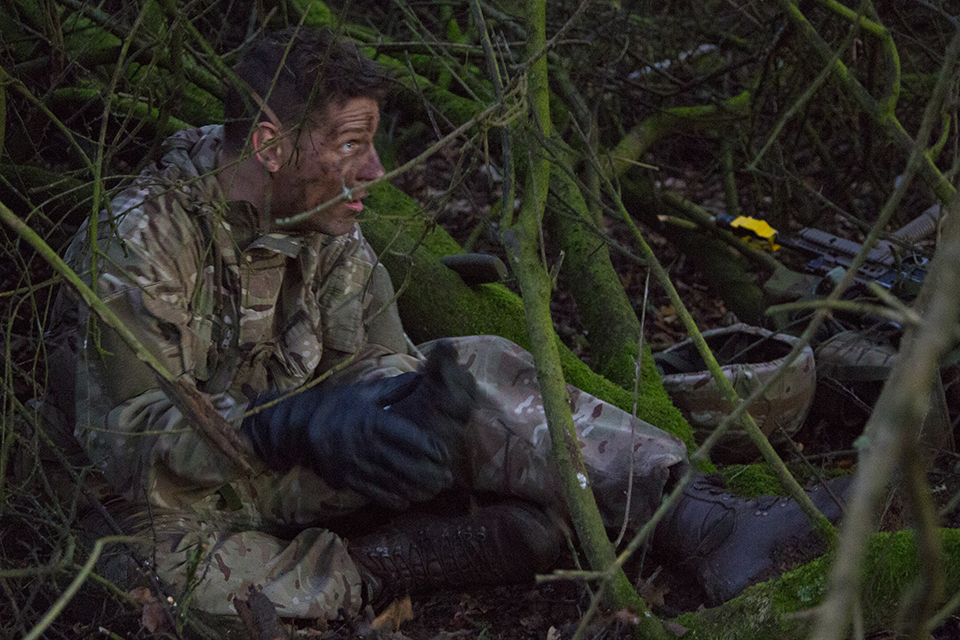 It’s Saturday morning and it’s 29-year-old Recruit Matt McCallen’s second exercise weekend. The first was wet; this one’s going to be cold. Two days ago he was sunning himself in Egypt on holiday with his wife. He got home on Thursday. After six hours sleep he was packing his kit and saying goodbye to his duvet to come to sleep under a hedge in Hampshire. Why do that?


I wanted to join the regulars when I was 17 but I broke my back in a motor cycle accident.

It took about 8 years to build up my strength to be able to do this. My kids are old enough now for me to put the time in. Joining the marines is the biggest challenge in the British Armed Forces. If I weren’t doing this, I’d probably just be down the pub.

My mates call me James Bond. They do think I’m a bit bonkers, but they are quite surprised to hear what we do in our training. It means doing a lot of phys in our civvy lives, but knowing that the PTI will be standing under you on our Wednesday night training sessions, barking if you’re not climbing the rope like he wants you to is all the motivation you need.
​ 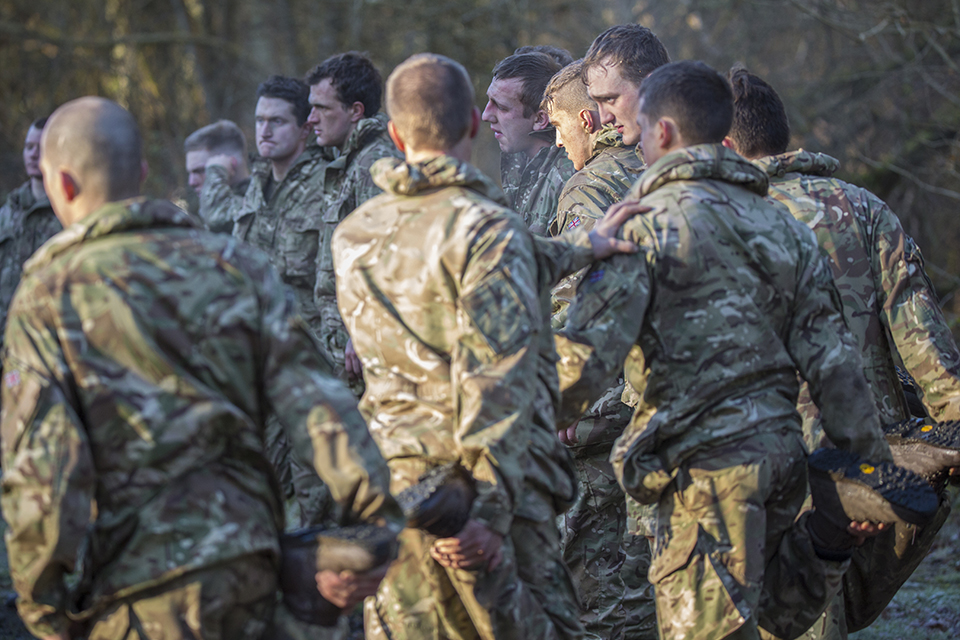 Getting a feed after their morning six-miler, recruits Rob Sullivan, 31 and Hassan Raza 24 have years of experience, battling back from injuries to conquer the course. They try to explain the attraction.


The long and the short of it is the sense of pride once you’ve done it. The camaraderie is amazing. I’d say I’ve got to know the blokes here better in a year than people I grew up with and went to school with. You can’t fully understand what you’re in for till you join up. Then reality hits you like a brick in the face.

When you tell people you’ve spent the whole weekend in a hole, raining, wet, cold and being bumped from place to place and being attacked by the training team and being thrashed for things that in civvy street would seem insignificant they always ask you ‘why are you doing it?’ and you’re standing there with a big grin on your face saying, ‘because it’s fun’.
​
Hassan said:


Its really difficult to explain to friends and family,” says Hassan. “They equate it to some kind of play station game or a movie. It’s a foreign concept to most people. But adversity brings you together.
​
Once you get the bug, it seems you’ve got it for good. Even getting hit by a truck while out on a training run didn’t put off 30 year old lawyer Recruit Nick Nason.


I was out yomping around in the dark and the Parks guy didn’t see me. It put me out of action for 14 months… but you should’ve seen the truck!

This was my first speed march since being back. While I’ve been off I’ve been having dreams about speed marches. There’s something spiritual about them. Yeah. I did have a girlfriend. But then I started doing this.
​
Enough said.

And when it’s all over, the thing they all look forward to is Den’s Luxury Travel.


It’s the coach to take us all back. There’s nothing luxury about it – but after a weekend it’s possibly the most luxury you could want.

Everyone’s knackered and you’d get more chat in a hearse. But when we all get back to work on Monday we go on our group Facebook page and have a chat. We may grumble but we always agree – that’s been the best thing we’ve done ever.
​
Not the sort of weekend to suit everyone. But for these lads, and others like them, they wouldn’t have it any other way. It may seem tough at the moment, but if they go on to get their green berets, they could easily be deployed on operations in two year’s time, doing things that will make all of this look like a doddle. Well you’ve got to train hard to be able to fight easy they say.