RIAT this year saw the arrival of the Protector from the US, paired with the announcement that RAF Waddington will be the main operating base for the aircraft, which continuing the foundations of flying Reaper, will operate this next generation, world leading aircraft.

The Defence Secretary also presented two British pilots with 1,000 flying hour certificates after they reached the milestone in the submarine hunting P8-A Poseidon Maritime Patrol Aircraft being purchased by the UK. Squadron Leaders Mark Faulds and Ian Tuff reached the achievement as part of their time training in the Seedcorn crew with the United States Navy.

The UK has ordered nine of the aircraft, investing £3 billion over the next decade in its Maritime Patrol Capability, building upon the principle of collective defence and security and strengthening US-UK interoperability. The Defence Secretary recently cut the first turf on a £132 million facility for the new fleet at RAF Lossiemouth.


The Royal International Air Tattoo is a perfect example of how Britain continues to lead the way in airpower, showing the story from the historic Lancaster, to the stealthy F-35 Lightning and now the incredible arrival of the Protector.

Not only are we continuing to invest in our own people and capabilities, but we are fostering partnerships with close friends, working with our American allies as we bring the Protector on board and set the way forward for the future of our submarine-hunting capabilities. Today’s show embodies how our RAF continue to have the equipment they need to protect our country and our interests around the world.
​ 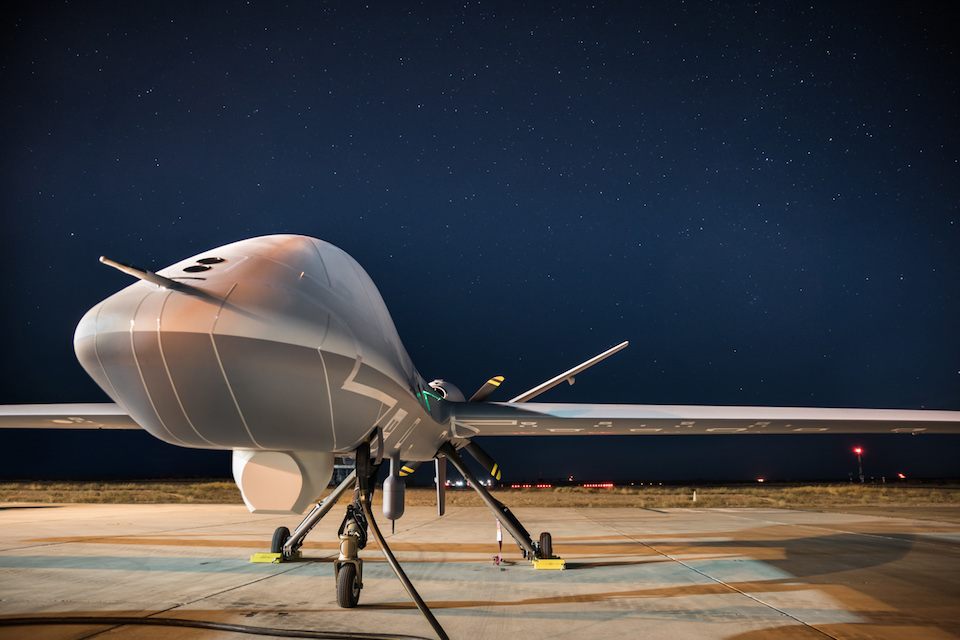 Marking the Protector’s arrival into the UK in time for RIAT, Defence Minister Guto Bebb was also at Fairford to see the latest addition to the Royal Air Force.

In a historic first, the aircraft flew non-stop from North Dakota, United States to Gloucestershire in a flight that took over just over 20 hours, setting the record as the first Medium Altitude Long Endurance Remotely Piloted Air System (RPAS) to transit across the Atlantic.

Designed to double the RAF’s Reaper capability, the Protector will provide world leading capability, able to persist for over 40 hours. The aircraft will contribute to Homeland and Defence tasks across the spectrum of operations, including but not limited to, military aid to civil authorities, and armed intelligence, surveillance, reconnaissance and target acquisition at long range and for long periods until beyond the mid-2030’s. The aircraft will be based at RAF Waddington, with planned investment of £93 million to construct a new purpose-built hanger as well new facilities and accommodation for crews.


Protector’s arrival in the UK marks a significant milestone in our determination to target future threats that we face. The Protector will bring us an opportunity to enhance our armed surveillance abilities and increase our weapons payloads to deter those who seek to do us harm.

RAF Waddington is renowned as the home of the UK’s eyes and ears in the sky, providing critical information about activity on the ground, in the air and at sea. Protector will help reinforce this capability and will not only give us a decisive advantage on the battlefield but will help us reach new heights to keep us safe at home and overseas.
​
The Protector is designed with anti-icing and lightning protection ensuring an unmatched ability to operate in adverse weather conditions. It will be able to contribute to an array of homeland defence tasks, including search and rescue, disaster monitoring or flood prevention activities. The Protector is also the world’s first RPAS to be designed, built and certified against stringent NATO and UK safety standards.

It was also announced yesterday by the Chief of the Air Staff Sir Stephen Hillier that the first RAF Squadron to be equipped with this latest technology will be Number 31 Squadron, passing on the baton for the Squadron’s proud operational record from the Tornado Force.

For the first flight across the Atlantic to succeed, the RAF provided guidance, advice and supervision of UK airspace procedures. To support bringing the aircraft into Service, the Protector Combined Test Team was recently established in the United States and is working closely with colleagues from industry and the United States Air Force to coordinate testing and evaluation of the vehicle.

The aircraft will be placed on static display at the Royal International Air Tattoo, demonstrating a key component of the future fleet the next generation aircraft.

As well as the demonstration of future equipment capabilities, RIAT featured the next generation of engineers and pilots. A cadet crew as part of a scheme sponsored by Boeing, showed off their fully working aircraft that they built.