The giant aircraft carrier and her escort, the destroyer Winston S Churchill, arrived on Sunday for five days on the first stop of a world wide deployment.

The visit forms part of an ongoing partnership between the US and UK on carrier operations in the run-up to the Royal Navy’s two new 65,000-tonne ships – HMS Queen Elizabeth and Prince of Wales – entering service.

Among the 5,226 crew on board the carrier are six Royal Navy aircraft handlers who are honing their skills ahead of serving on board HMS Queen Elizabeth which is due to arrive in Portsmouth in 2017.

Another crew member is on board the support ship Winston S Churchill, 27 year-old Royal Navy officer Lieutenant Lynsey Sewell is the ship’s navigating officer. The position is always filled by a UK navigator to honour the ship’s British connection.

Senior officers on board both ships will call on senior Royal Navy officers during the visit to discuss recent global operations and get an update on the UK’s carrier programme.


The USS Theodore Roosevelt’s visit shows yet again that UK/US relations are as close as ever. Ten days ago, I was the first of his counterparts to meet incoming Defence Secretary Ash Carter.

Having the Roosevelt in Portsmouth today is yet another example of the world’s broadest, deepest and most enduring defence relationship at work. I’m thrilled to be going aboard today to welcome the crew personally.
​ 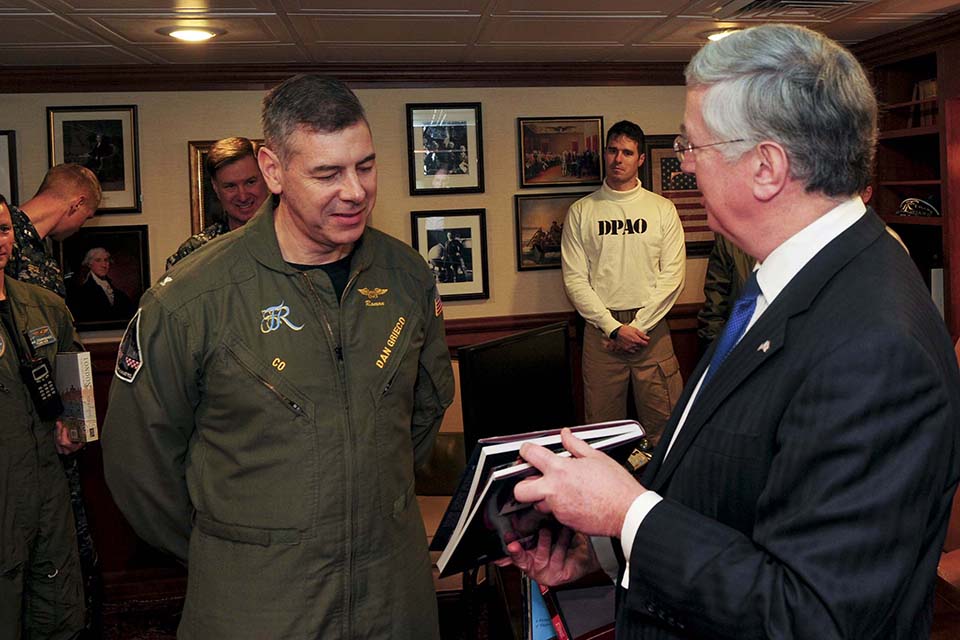 We warmly welcome the Theodore Roosevelt Carrier Strike Group - a reflection of the close partnership between our nations and navies, and the value of credible seapower in support of our shared national interests.

Across the spectrum – from Type 45 destroyers providing area air defence for US carriers launching air strikes against ISIL, to generous US support as we regenerate our own carrier strike capability – our common bond has never been richer.
​
USS Theodore Roosevelt will anchor off Stokes Bay near Gosport on Sunday at 17:00 and the USS Winston S Churchill arrives at Portsmouth Naval Base at approximately 13:30. Both leave Portsmouth on March 27.