Ministry of Defence said:
Exercise Aman (Urdu for ‘peace’) was hosted by the Pakistan Navy and aimed to show the commitment of nations involved in tackling terrorism and other crimes in the Indian Ocean. The exercise also provided a chance for the navies involved - some of which don’t work together very often - to hone their skills.
Commander Paddy Dowsett, the Commanding Officer of HMS Northumberland, said:

The opportunity to exchange ideas with Chinese, American, Australian, Emirati and Italian sailors - all in the same forum - was a fascinating experience.
​
At sea, exercises included gunnery blasting ‘killer tomato’ inflatable targets, performing counter-piracy demonstrations, carrying out cross-deck landings (which means helicopters from the various participants practise landing on different warships), and staging a combined search and rescue exercise. 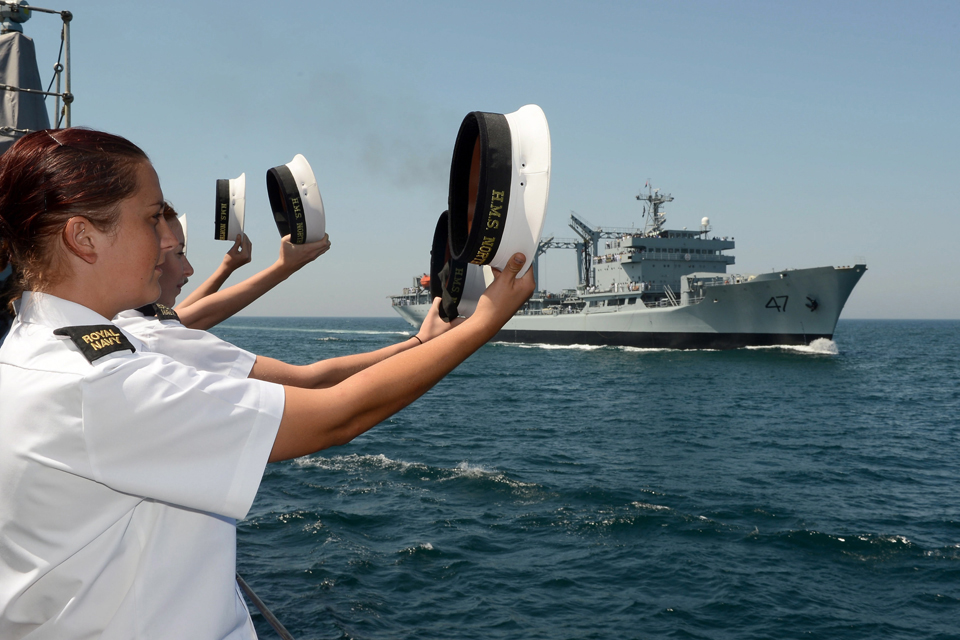 Both the harbour and sea phases of Aman provided my ship’s company with an all-too-rare insight into both the culture and tactics of our key regional partners.
​
In many respects the harbour phase, with its packed programme of social, cultural and sporting activities, was as important as the days spent at sea.
​
HMS Northumberland is working as part of the Combined Maritime Forces - a coalition of 27 nations committed to maritime security from the Red Sea to the shores of the Seychelles and Pakistan - carrying out patrols to tackle pirates, terrorists and smugglers.
The ship is due to return to Plymouth in May after nearly 8 months away.

Why would they be doing that routine to a Fleet Oil Tanker?

:blob8:Wondered that myself, perhaps the photo was taken at Spithead?

Could it be that as women, their faces cannot be seen by the men on the FA Tanker, so they hold their hats in front of them as a sort of emergency burka?:dontknow::lol:

So did I, how very strange, maybe the old man being Irish might have something to do with it.

Moderator
The Royal Navy is rare in that its Auxiliary ships are civilian manned. Most are commission ships of the line.
F

Shouldn't they be saluting the RN ship?
2

Guns said:
The Royal Navy is rare in that its Auxiliary ships are civilian manned. Most are commission ships of the line.
Click to expand...

So what happened to "Attention on the upper deck, face to port (name of warship)"? I've manned and cheered ship a few times, but only for Royalty/ Heads of State, which was pretty rare. Is this a new routine to account for the fact that HM Ships are so rarely seen by foreigners these days? :wink:

Could it be they're saluting the ship opposite them but due to the PC leanings of the photographer he/she thought it more important to photograph the lady sailers so the ship in question isn't actually in the photo?

flymo said:
Shouldn't they be saluting the RN ship?
Click to expand...

Perhaps Her Majesty's Ship is returning the Pakistani ship's salute.

Agree, "face to port / starboard and salute" and piping the whatever usually does it but not if the salutee has some very big cheese on board, like their president. Just the kind of detail that may be missed in the selective, narrow band reporting, official or not.

Or perhaps the Command team is on board the Auxiliary?