The commitment came as he met the Omani Minister Responsible for Defence Affairs, His Excellency Sayyid Badr bin Saud bin Harub Al Busaidi to review the defence relationship between the two countries. They also signed a new defence Memorandum of Understanding.

Britain’s armed forces plan to deploy 45 short term training teams to Oman in 2016, compared with the annual average of 34. These teams will play a key role in training Omani troops on range of core skills such as crisis management, instructing medical teams in combat response and teaching engineers how to use vital equipment.

The uplift complements a comprehensive programme of exercises which includes a four day maritime exercise focussing on sea mine threats and a six week land exercise to train Omani troops on how to operate in a mountainous environment. The UK also intends to look at options for a permanent training facility in the country.

Michael Fallon also took the opportunity to cover a number of mutual defence interests and gain an insight into regional issues including the conflict in Yemen.


This training uplift underlines the commitment we made in our Strategic Defence and Security Review to increase our partnerships in the Gulf region.

Oman is our friend. We are working more closely than ever with them across military, counter-terrorism and intelligence fields to tackle shared threats to stability.
​ 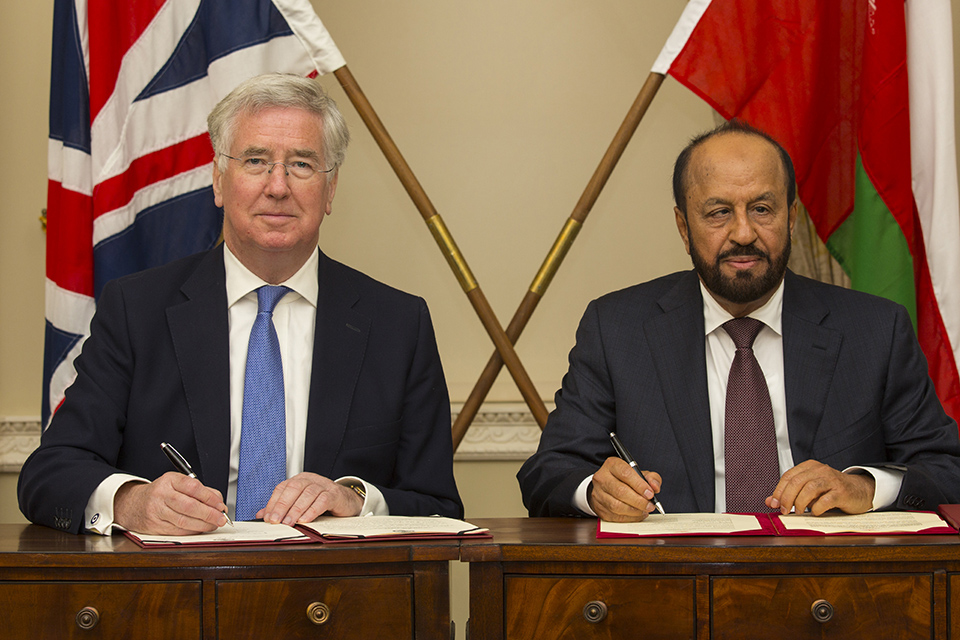 Oman is a longstanding British ally in the Gulf with shared interests across diplomatic, economic and security matters.

The meeting today follows a visit to the country in March where Mr Fallon announced the intention to develop a multi-million pound joint venture between British defence company Babcock International and the Oman Drydock company.

The agreement, supporting development at the booming Duqm Port complex, will provide vital engineering support to the world’s naval vessels.