Operated jointly by the Royal Navy and Royal Air Force, the F-35 Lightning jets will be able to operate on land or embarked on the UK’s new aircraft carriers. This delivery is a significant milestone for the Lightning Programme and in particular, alongside the formal commissioning of the HMS Queen Elizabeth Carrier into the Royal Navy earlier this month, demonstrates the advancement towards the establishment of the UK’s Carrier Enabled Power Projection capability.


This Christmas delivery is the 14th jet to join our fleet of fifth-generation F-35 fighters over in the US. The Carriers have taken centre-stage this year, and next year we look towards these aircraft joining us in Britain and taking off from HMS Queen Elizabeth’s enormous deck to undertake First of Class Flight Trials. With our famous Royal Air Force coming into its 100th anniversary, the F-35 keeps us right at the cutting-edge of combat air power.
​
Peter Ruddock, Chief Executive of Lockheed Martin UK said:


There are more than 500 UK companies in our supply chain who play a vital role in producing every F-35 and we are proud to have delivered the UK’s 14th aircraft on schedule. More than 260 F-35s are now flying from 14 bases around the world and we look forward to supporting the UK’s Lightning Force, as they prepare to bring their F-35s to the UK and achieve initial operational capability next year.
​
There are currently some 200 British personnel based at Beaufort testing the aircraft and getting them ready to arrive in the UK next summer as 617 Squadron. Preparations are also being made for First of Class Flight Trials, due to take place on HMS Queen Elizabeth later next year. The programme is on schedule to achieve Initial Operating Capability from land next year with Initial Operating Capability Carrier Strike in 2020. In addition to its short take-off and vertical landing capability, the F-35B’s unique combination of stealth, cutting-edge radar, sensor technology, and electronic warfare systems brings all of the access and lethality capabilities of a fifth-generation fighter. 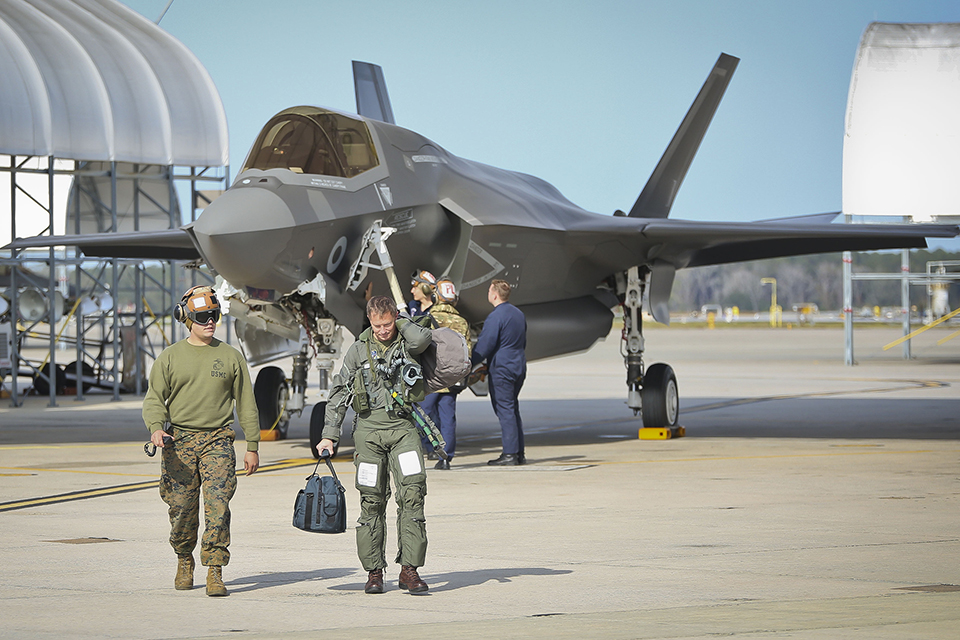 In 2018, the aircraft – along with the Navy and RAF pilots and ground crew – will arrive in the UK to officially stand up at RAF Marham in Norfolk. RAF Marham will be the Main Operating Base for the Lightning Force in the UK and from here, they will deploy forward to either embark on-board our Queen Elizabeth Class aircraft carriers, or operate from Deployed Operating Bases.

Following successful trials on the land based ski-ramp design which is featured on the UK flagship, and with the RAF Marham runway infrastructure completed as part of a £250m major investment programme in preparation for the F-35 arrival, Defence Minister Harriett Baldwin earlier this year announced that the F-35 was cleared for take-off.

As the only level one partner on the F-35 programme, the UK has been working closely with the US from the outset. UK industry will provide approximately 15% by value of each F-35 to be built, which are due to total more than 3000 in number. The programme has already generated $12.9Bn worth of orders for the UK and at peak production the programme will support over 24,000 jobs in the UK.

Some milestones reached on the F-35 programme this year include:

You could just argue the case grammatically for "the HMS Queen Elizabeth carrier", with a lower case "c", but it is still clumsy.

Sloppy writing, I'm afraid, from MOD, which should pull its socks up.