Experts from Norway, Sweden and the United States travelled to join UK experts from the Atomic Weapons Establishment at RAF Honington, Suffolk where the exercise, named ‘Letterpress’, took place.

The first of its kind, the exercise began to address the greatest technical obstruction to nuclear disarmament – the absence of an established or agreed process of checking the dismantlement of a nuclear weapon. Letterpress is part of an ongoing arms control research collaboration. In a concluding event yesterday personnel simulated the very early stages of dismantling a mock-up nuclear weapon and there were a range of talks from international experts the subject. 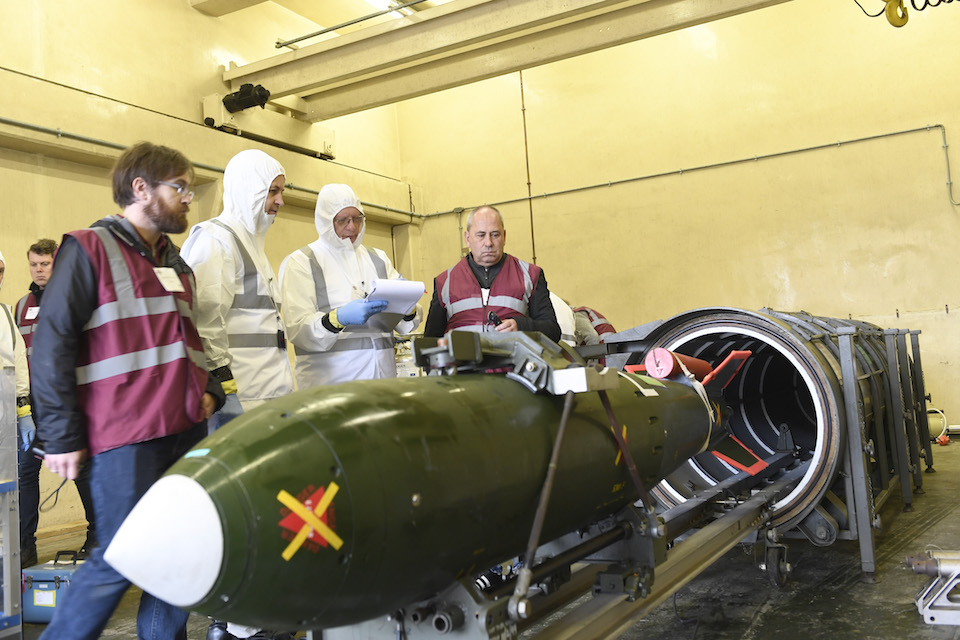 Exercise Letterpress included a simulation of of the early stages of dismantling a mock-up nuclear weapon.
Speaking on the exercise yesterday, James Franklin, Head of Nuclear Policy for the UK Ministry of Defence said:


International exercises of this scale are hugely important to ensure the possibility of a world without nuclear weapons. This exercise was part of our commitment made at the Nuclear Non-Proliferation Treaty (NPT) Preparatory Committee 2017 and makes a tangible contribution to the UK’s commitment to Article VI of the treaty itself which remains the cornerstone of the international non-proliferation framework. I’m proud the that UK remains a responsible nuclear weapons state, exercises like this and the reduction of our nuclear forces by over half since the Cold War continue to reinforce this
​
Director General of the Norwegian Radiation Protection Authority, Ole Harbitz remarked:


Disarmament verification constitutes a central part of Norway´s non-proliferation and disarmament work. We must focus on effective and concrete steps to achieve a world without nuclear weapons, in accordance with the Nuclear Non-Proliferation Treaty. Exercise Letterpress is a core building block of our common efforts and exemplifies a fact-based approach to disarmament that we strongly believe in. International cooperation of this kind is essential in developing trust and confidence between nuclear and non-nuclear weapons states. Norway’s long-term cooperation with the UK on disarmament verification -the UKNI - has greatly improved our understanding of the technical and security related challenges associated with nuclear disarmament.
​
Signing in 1968, the UK has been a long-term member of the Treaty on the Nuclear Non-Proliferation Treaty, which has a key aim of achieving the long term goal of nuclear disarmament. Exercises like Letterpress are key to fulfilling our commitment to the Treaty.

Speech: Working together to persuade states not to obtain weapons of mass destruction

Speech: The case for the retention of the UK's independent nuclear deterrent