Ministry of Defence said:
BFBS has been providing award-winning news and entertainment for personnel and their families for 70 years and, with the start of the new contract on 1 April 2013, this is set to continue for the next 10 years.
Nick Pollard, Chief Executive of the Services Sound and Vision Corporation, said:

We are delighted to be starting this new era as the Forces broadcaster. Throughout the past 7 decades we have served Britain’s Armed Forces and their families around the world and are proud to be continuing that.
​
It is a time of great change for the UK’s military community and we will be changing too - in our programmes, in our technology and in the locations we operate. But one thing won’t change is our commitment to giving the best possible service to the men and women of our Armed Forces.
​ 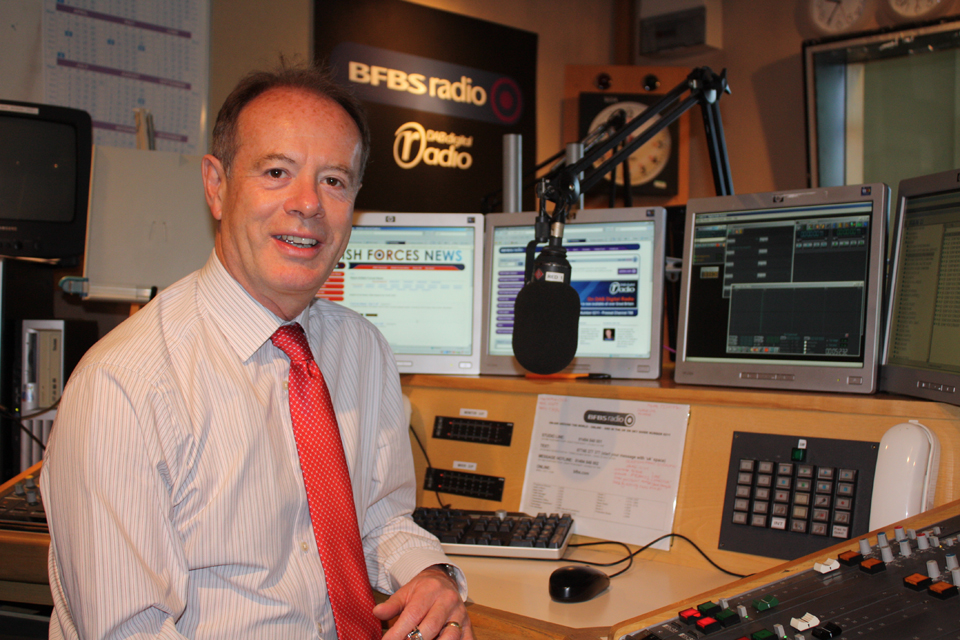 Patrick Eade, head of the BFBS overseas and online service, BFBS Radio 2, in the studio (stock image) [Picture: Copyright Services Sound and Vision Corporation]The new BFBS TV schedule provides viewers with more live television from the UK across 8 core channels but more will be added later this year. Along with BBC One, BBC Two and ITV, BFBS Sport is also included in the new line-up, in addition to 2 further channels for Sky Sports 1 and 2.
Sky News is broadcast on one of the channels and will incorporate BFBS TV’s British Forces News towards the end of this year. Gurkha viewers based outside of Nepal can also watch Nepali TV on a separate channel.
Military families have more choice as the new BFBS Extra channel shows a wide range of drama, comedies and documentaries, as well as the 30-minute British Forces News programme every weekday. Younger viewers can also enjoy fresh content as CBBC and CBeebies have replaced BFBS Kids.
new local stations in the UK join the existing UK service on DAB digital radio and the BFBS Radio overseas network in Afghanistan, Brunei, Canada, Cyprus, Falkland Islands, Gibraltar and Germany.
These community stations are now available on FM via BFBS Aldershot (102.5), BFBS Blandford (89.3), BFBS Catterick (106.9), BFBS Colchester (107.0), BFBS Scotland (98.5) and BFBS Salisbury Plain (106.8).
Live and local breakfast shows are broadcast from these locations, together with core BFBS radio programmes such as the weekday Total Ops Connection from Afghanistan and the weekend request slot, Access All Areas.
Music and entertainment programmes remain the focus of the output, while live news bulletins from British Forces News and local stories provided by regional reporters also feature in the updated schedule.
The new community radio stations add to the existing BFBS Northern Ireland services in Aldergrove, Ballykinler, Holywood and Lisburn, as well as the BFBS Gurkha Radio service that broadcasts in 10 locations around the UK. 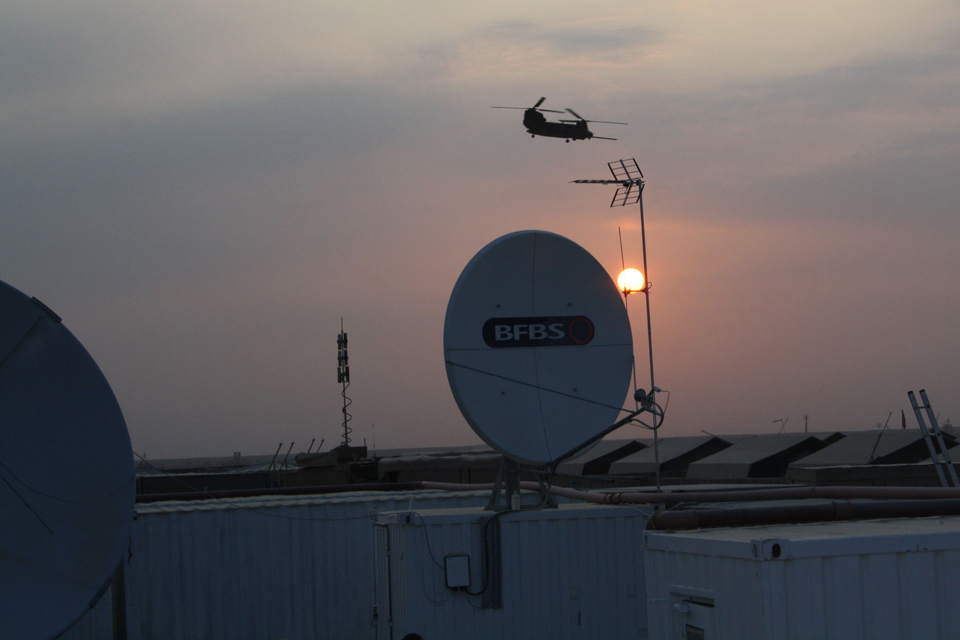 A BFBS satellite dish (stock image) [Picture: Copyright Services Sound and Vision Corporation]The service on DAB digital radio continues to provide national coverage in the UK, alongside the BFBS Radio UK output on digital TV via Freesat 786 and Sky Guide 0211.
Overseas, the familiar FM services broadcast via BFBS Radio, BFBS Radio 2 and BFBS Gurkha Radio remain, but now have updated schedules.
BFBS online services are at www.bfbs.com so wherever personnel and their families are based in the world, if they have an Internet connection, they can access BFBS.
The launch of the British Forces News app means that the latest Armed Forces news is available 24/7 via a smartphone. It mirrors the content on the main British Forces News website at www.bfbs.com/news so video reports can also be viewed on the app.
The BFBS Radio app also streams live radio straight to smartphones and listeners can use it for all of the message-sending features found on the BFBS website.
The 3 main BFBS Radio services; BFBS, BFBS Radio 2 and BFBS Gurkha Radio are streamed live on the website. Content is also streamed live from BFBS stations in Afghanistan, Brunei, Canada, Cyprus, Falkland Islands, Gibraltar, Germany and Northern Ireland.
The online ‘Listen Again’ service at www.bfbs.com/radio/listen is also continuing. This offers the opportunity to catch up on music and features from the main daily programmes such as the Ops Breakfast, The Total Ops Connection, the BFBS Gurkha service, as well as a selection of specialist programmes.