Lightning II is a STOVL aircraft: Short Take Off Vertical Landing. It will place the UK at the forefront of fighter technology, giving the RAF a true multi-role all weather, day and night capability, able to operate from well-established land bases, deployed locations or the Royal Navy’s Queen Elizabeth Class Aircraft Carriers.

The six United States Marine Corps (USMC) Lightning II aircraft are onboard USS WASP, off the coast of the United States’ Eastern Seaboard. The aircraft are assessing the ship/air integration and effectiveness across flight operations, communications, maintenance support and logistical supply. Operational Test activity will include carrier qualifications for aircraft take-off and landing, and air combat/air defence missions over sea.

Find out how the F35B lightning II works

The Royal Navy’s vision for tactical integration of the F-35B into their current arsenal is similar to the Marine Corps’ plan to integrate the F-35 with legacy aircraft, such as the AV-8B Harrier and the F/A-18 Hornet, and gradually phase out legacy aircraft over the coming decades.


By 2020, UK combat airpower will consist of Typhoon and F-35B Lightning II, a highly potent and capable mix of fourth and fifth generation fighter aircraft. With Typhoon already established as one of the premier multi-role fighters in the world, the F-35 brings a complementary next-generation level of survivability and lethality. This will ultimately provide the UK with an unprecedented level of capability in a single platform.
​
In February, the UK stood up their first F-35 Squadron at Edwards Air Force Base, California. The historic 17 (Reserve) Squadron is now responsible for the entire operational test and evaluation of the UK’s F-35s. Personnel from 17 (R) Sqn, comprising engineers and pilots from the Royal Air Force and Royal Navy, fly and maintain the two UK F-35B jets independently from their US colleagues. 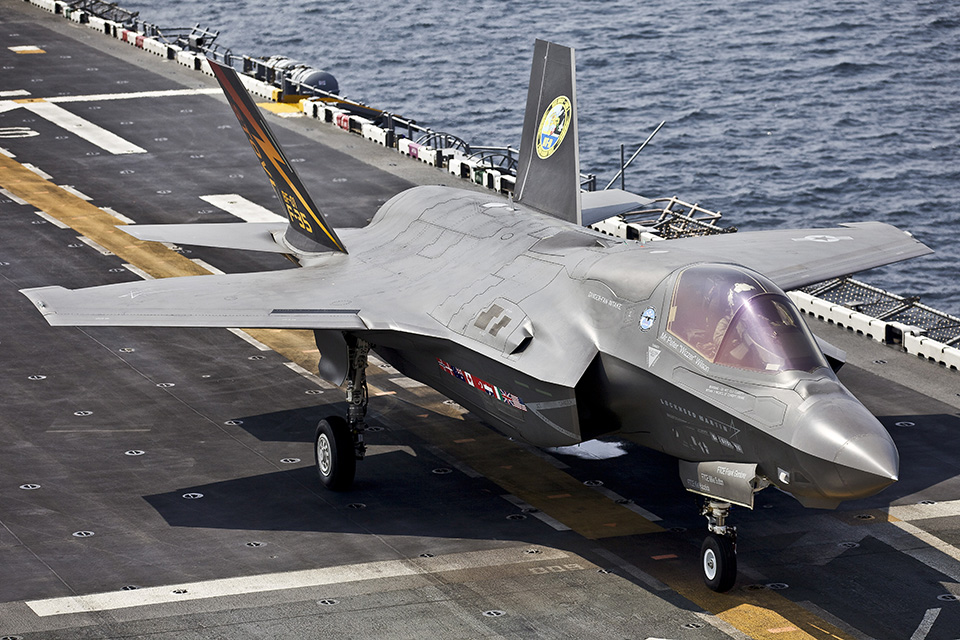 US Lieutenant General Chris Bogdan is the Program Executive Officer for the F-35 Lightning II Joint Program Office. He said :


United Kingdom participation in the F-35 program has been absolutely critical to our success. Since the beginning, UK test pilots and engineers have been fully integrated and work shoulder to shoulder with us as we deliver the F-35 to the warfighter.
​
Evidence and experience gained from this event will provide the basis for future F-35B deployments as the USMC work towards their Initial Operating Capability (IOC) in Summer 2015. UK F-35B pilots will begin operating the next generation stealth fighter from bases in England starting in 2018, and are on track to fly from Queen Elizabeth Class aircraft carriers in 2020.