More than 5,000 personnel from the UK and France will take part in Exercise Griffin Strike, which will test the Combined UK and French Joint Expeditionary Force (CJEF).

The exercise will see a UK-French headquarters planning and executing major land, sea and air activity for the first time in a demonstration of the force’s ‘full validation of concept’. This marks a significant milestone in the generation of a rapidly deployable force for bilateral operations ahead of any coalition action.

The CJEF has been developed since 2010 as a product of the bilateral Lancaster House Treaty and will enable the UK and France to deploy forces rapidly to conflict zones ahead of a wider NATO or coalition operation, or to meet peace-keeping, disaster relief or humanitarian assistance requirements.


This joint force will combine the might of two of the world’s biggest militaries, backed by our rising defence budget. It will enable us to deploy rapidly with our French allies, helping to keep Britain safe while contributing to security in the world.
​
This exercise will demonstrate the sending of a tri-service force into an area of operations. Aircraft including Typhoon and Rafale jets will operate from RAF Leeming in North Yorkshire, while at sea warships including HMS Ocean, Bulwark and Duncan will work off the south and west coast of England with French ships including FS Dixmude, FS Cassard and FF La Motte Piquet. On Salisbury Plain elements of the Army’s 3(UK) Division and French 7th Mechanised Brigade including paratroopers, armoured units and infantrymen, will work together. 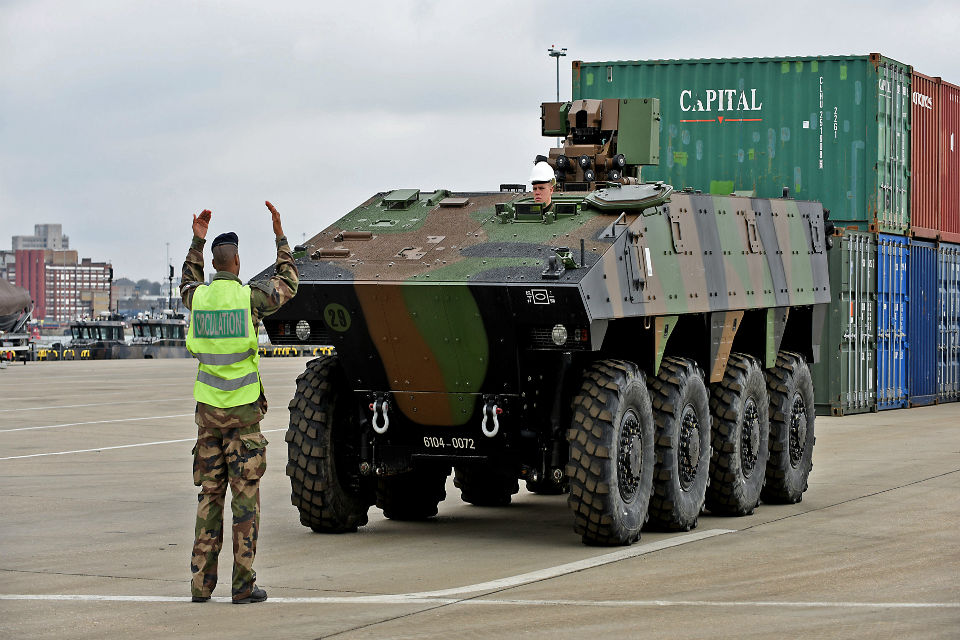 Troops and vehicles from France arrive in the UK to deploy on Exercise Griffin Strike. Crown Copyright.


Exercise Griffin Strike marks a key milestone in the development of the Combined Joint Expeditionary Force, the embodiment of our military relationship with France. The next two weeks will see French and British servicemen and women training side by side on the sea, on land and in the air. Together with Admiral Laurent Isnard, my French counterpart, we are anxious to demonstrate that our military partnership is now on a new level and show how the combined UK-France Combined Joint Task Force in the most testing of circumstances, stands shoulder to shoulder. This is an immensely exciting prospect and one which will put our sailors, soldiers and airmen through their paces.
​
Simultaneously, over 3,400 more NATO troops will exercise by land, sea and air during the two weeks of Exercise Joint Warrior.

During Joint Warrior, much of which will take place off the coast of Scotland, 22 ships, four submarines and more than 40 aircraft from 12 NATO nations and three partner nations will take part. Around 1,500 personnel from the Royal Navy, British Army and Royal Air Force will participate. Other countries taking part include Belgium, Canada, Denmark, Finland, France, Germany, the Netherlands, New Zealand, Norway, Poland, Spain, Sweden, Turkey and the US.

Last year, following a UK offer, Joint Warrior was linked to the NATO military exercise programme. That allowed the alliance to send specific groups to participate, including Standing Maritime Groups, Maritime Counter-Measures Groups and NATO Airborne Early Warning Aircraft. Joint Warrior is an example of the UK and NATO allies working together as a coalition on land, sea and in the air. This includes training in anti-submarine warfare, anti-surface warfare, submarine training, mine countermeasure training and maritime security operations. On land and in the air the exercise will offer the UK and its allies training in air operations, close air support, tactical intelligence surveillance target acquisition and reconnaissance, electronic warfare training, jamming operations and joint firing.


Joint Warrior remains a unique opportunity for UK, NATO and Partner Nations’ forces to train alongside each other and test their capabilities in an operationally realistic and challenging environment. The complexity of the exercise, which is always evolving, supports maritime, land and air training at large scale and delivers intense scenarios that drive our combined warfighting capabilities.
​
Continue reading...
You must log in or register to reply here.