The Institute of Directors (IoD) became the latest organisation to sign up to the Armed Forces Covenant yesterday at their annual conference in London.

The IoD’s Covenant pledges also include allowing veterans to access their organisation’s expert network of advice and resources for entrepreneurs, joining with the MOD on forging stronger links between business and the military, and encouraging businesses to help the small number of veterans who struggle with mental health issues. 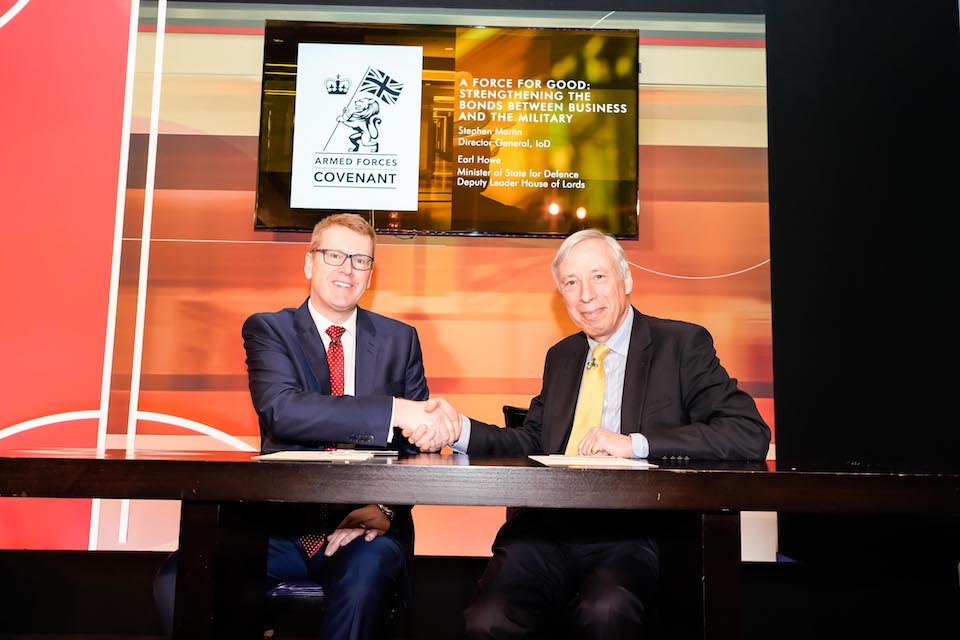 The signing comes as National Express, the first business to sign the Covenant in 2013, renewed their commitment to the military community at an event on Horse Guards Parade.

The signings demonstrate how the support for the Armed Forces Covenant has grown across the UK since it was first introduced as part of the Armed Forces Act 2011, with over 2,200 organisations having pledged their support.

The Armed Forces Covenant is a promise from the nation that those who serve or have served, and their families, are treated fairly.

Defence Minister for the House of Lords Earl Howe said:


The Institute of Directors signing the Armed Forces Covenant sends a powerful message to its members and those in the wider economy that they are a Forces-friendly organisation, helping to attract high-quality Service leavers who bring with them a wide range of skills and experience.
​
Stephen Martin, Director General of the Institute of Directors, said:


I’m extremely proud to signing the Armed Forces Covenant on behalf of the Institute of Directors, and I look forward to the IoD’s continued engagement with the Ministry of Defence. In signing the Covenant, the IoD will help to ensure that the immense contribution the armed forces make to our society and to business does not go unrecognised. Not only do service personnel provide the security and freedom that underpins our lives, but they also have the potential to become great assets to the UK economy, bringing the wide array of skills and experience they have gained to businesses activity the country.

In becoming a signatory to the covenant, we will use the tools at our disposal to highlight the many benefits of employing those coming out of the armed forces. In keeping with our Royal Charter, we will also look to help budding ex-services entrepreneurs to establish the networks, confidence, and skills they need to start and scale their own businesses.
​
The IOD will open its 2,500 members strong IoD99 networking and social events to ex-service entrepreneurs and champion stronger links between the business community and the Armed Forces, showcasing those that highlight the benefits to employers of taking on ex-Service personnel.


Defence Minister Tobias Ellwood countersigned National Express’ Covenant renewal alongside their Group Chief Executive Dean Finch during a networking event at Horse Guards Parade in central London yesterday. A Covenant branded National Express coach, which will be navigating the London airport routes, was parked on Horse Guards for a photoshoot with the Queen’s Guard to mark the occasion. 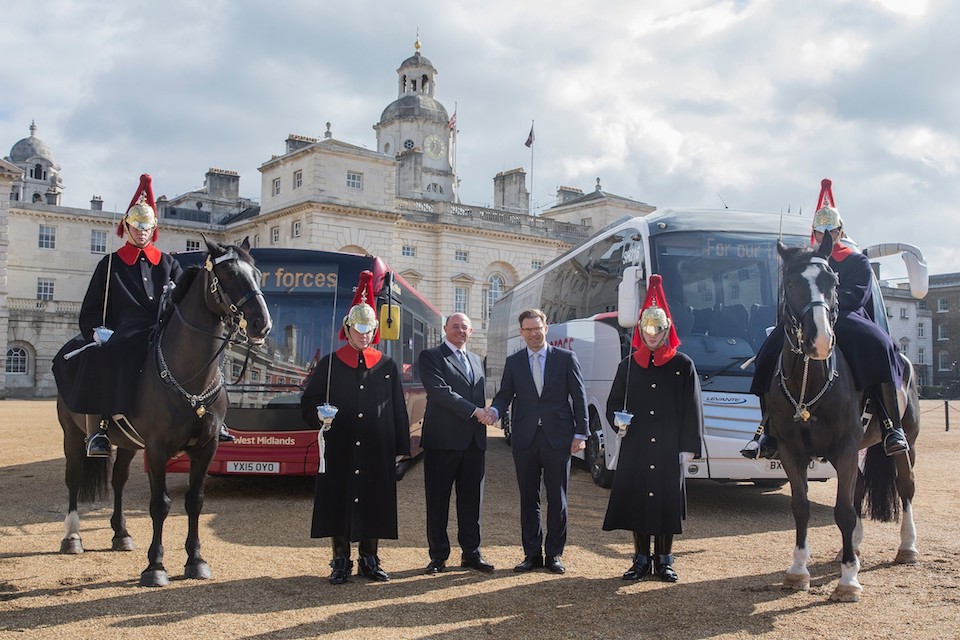 
We’re very proud to have been the first company to sign the Covenant and I am delighted we are signing an even greater commitment today. Armed Forces personnel and their families do a great service to this country and it is right that companies like ours do what we can to support them.

We employ many ex-services members and current reservists and also want to recognise their significant contribution to our company and the country. Our extended commitments demonstrate both the success of our first covenant and our commitment to growing this important partnership with the Ministry of Defence. I would like to thank all involved in this great initiative.
​
National Express will offer guaranteed interviews to service leavers and their families for all National Express roles across Coach and Bus, provide ten days extra leave for staff in the Reserve Forces, and offer free bus travel to families visiting soldiers at the Military Hospital at the QE in Birmingham and to volunteers on Remembrance Sunday.

The company already employs over 40 former forces personnel and reservists in a variety of roles including: drivers, health and safety officers, bus engineers, and customer service advisors from all over the Armed Forces, ranking from Private all the way up to Major.