Lance Corporal (LCpl) Ronald George Blackham has finally been laid to rest alongside 2 unknown soldiers after they were killed in Capezzano within the Italian province of Salerno during the Second World War. All 2 enlisted into the 3rd Battalion Coldstream Guards and were given a ceremonial burial with full military honours on 16 March 2017 at Commonwealth War Graves Commission (CWGC) Salerno War Cemetery, Italy.

The service, organised by the MOD’s Joint Casualty and Compassionate Centre (JCCC), part of Defence Business Services was conducted by The Reverend Jacob Caldwell CF, Chaplain to the 1st Battalion Coldstream Guards.


These brave men fought for their country to make our lives better. The service today was to honour all three and to enable the family of Lance Corporal Ronald Blackham to have closure after over 70 years.

It has been a privilege to be able to identify LCpl Blackham and we will continue with our investigations to identify the two unknown soldiers.
​
The Coldstream Guards were brought up to Hill 270 to attack at midday on 25 September 1943, their plan was to reach the bottom of the hill by infiltrating from the left and using the thick trees as cover. No.1 Company were to lead followed by No.3 Company, both from the 3rd Battalion and included LCpl Blackham.

They planned to move in single file in a wide semicircle across the German front. At 11:40 hours the attack began with No.1 Company on the left and No.3 Company on the right, regrettably there were huge casualties, including LCpl Blackham.

LCpl Blackham was just 22 years old when he was killed.


Today, we formally honour the sacrifice of three soldiers who lost their lives in the business of war for the purposes of peace. The sacrifice of soldiers such as LCpl Blackham and his two comrades at the Battle of Salerno remind us of the cost of war and the price of peace. As we honour their sacrifice we commit ourselves afresh to advance the cause of peace in this, our generation.
​
In 2014 the remains of 2 soldiers, including those of LCpl Blackham, were found in the neighbourhood of Capezzano and Coperchia in the municipality of Pellezzano, South Italy in the province of Salerno, by a group of military historians, Associazione Salerno 1943. The third set of remains were found by a separate military historical group, Avalanche 1943. 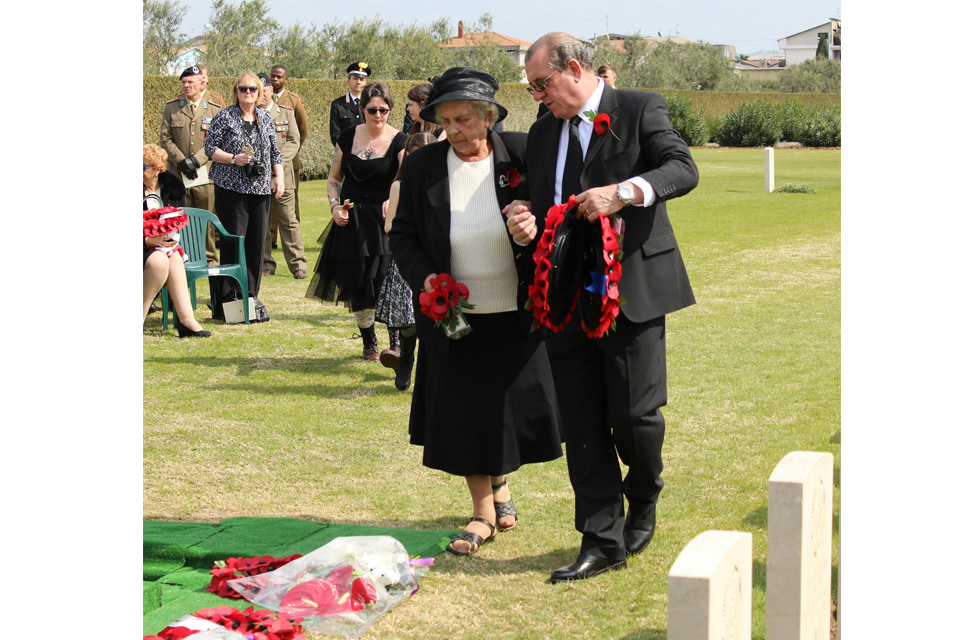 
I was a little girl of seven years of age when my oldest brother Ron, was taken from us. I have clear and treasured memories of his 21st birthday celebrations, his last visit on leave and also the devastation and sadness caused to our family by the news of his death.

It is wonderful to have this final chapter written but so sad that so many members of the family are no longer here to witness this day.
​
Douglas Blackham brother of LCpl Blackham, who couldn’t attend today’s service, said:


Ron was my much loved and missed older brother. My parents never emotionally recovered from his loss. I am so pleased that my DNA was able to close this door, albeit 74 years after Ron’s death.
​
Additional statement from the Blackham family is as follows:


All our family and in particular Ron’s brother and sisters have been overwhelmed by the discovery of their brother Lance Corporal Ronald George Blackham after he was tragically killed nearly 74 years ago in the hills above Salerno.

During the battle for Hill 270 there were a reported 120 other casualties, some of whom are yet to be discovered and identified. This is a remarkable story and really does remind us all of the bravery and sacrifice made by the officers and men of the 3rd Battalion. We are all honoured and proud to be invited to the service and so grateful for the efforts and time provided by the MOD Joint Casualty and Compassionate Centre, the Commonwealth War Graves Commission, and the Salerno 1943 Association who discovered his remains.
​
Commander (Cdr) Neil Thompson, Naval/Air Attaché British Embassy said:


I am proud and honoured to be representing the British Embassy at the burial of three soldiers who lost their lives during the terrible fighting that took place in southern Italy during the Second World War. These three soldiers bravely fought through difficult and trying circumstances with courage and strength.

We know a little about one of the soldiers, Lance Corporal Blackham, who had a very full life in the UK before signing up for his country. We are honoured to have much of his family attend the burial, including one of his sisters. It is comforting to know that the memory of a brave young man has been kept alive for over 70 years and hope that we continue to remember those like him, and all who died, for many years to come.
​
Nic Andrews, CWGC said:


Lance Corporal Ronald George Blackham along with two of his fellow Coldstream Guards, whose identities are not known, have been laid to rest at the Commonwealth War Graves Commission’s Salerno War Cemetery. Today’s burial ceremony is an opportunity to give thanks for their service and to remember the sacrifices made by all who died during the Second World War. The CWGC is honoured to care for them and all those Commonwealth servicemen and women who died during the two world wars, in perpetuity.
​
Lt Col Thurstan, 1st Battalion Coldstream Guards said:


Although more than 70 years have passed since the Battle of Salerno, the burial we have witnessed today has lost none of its poignancy or significance. The sacrifice made by LCpl Blackham and his fellow Coldstreamers reminds us of more recent operational casualties and it is our privilege to honour the enduring courage and loyalty of soldiers from each generation.
​
Having received formal notification of remains being found the JCCC undertook genealogy research in an attempt to discover a potential relative. Subsequent DNA testing by LGC Ltd proved that a brother of LCpl Blackham had been located.


The 1943 Salerno Association reconstructs the stories of ordinary people, stories that the war took away with them. To return Ronald George Blackham to the affection of his family, allow the brothers still living to have a tomb to pray, to give a name and a face to a young man who went missing, brings us a great emotion and rewards the efforts and the resources spent for the fieldwork.
​
Pasquale Capozzolo, Avalanche 1943 said:


The search and retrieval of the fallen in our area is a source of pride, and know that the remains of a member of the 3rd Battalion of the Coldstream Guards will have a proper burial has filled our hearts with joy.
​
Victoria Moore, Science and Innovation Division at LGC said:


It has been an honour to be present at today’s ceremony, and I feel immensely privileged to have assisted in the identification of LCpl Blackham.

DNA profiles have been obtained from the remaining two unknown soldiers, and where possible we will continue to test any further potential familial relatives for comparison that may come forward.
​
One new headstone bearing LCpl Blackham and 2 inscribed with Known unto God for the unknown soldiers have been provided by the CWGC, who will now care for their final resting place in perpetuity.