The presentation followed an announcement by the Defence Secretary Michael Fallon that the medal, which recognises the good conduct of Armed Forces personnel over a 15 year period, has now been extended to include those ranked as military officers.

Under the new rules, all regular serving members of personnel with 15 years of service, clear of disciplinary entries on their record, will have it recognised.

Ahead of a special ceremony next week that will see Mr Fallon presenting the first medals to members of the Armed Forces, he said:


Tracing its history back to 1830, the Long Service and Good Conduct Medal is the oldest medal still being awarded. It is therefore right to make these changes and to be able to more fully recognise those who commit themselves to a career serving our country in the Armed Forces.
​
The Queen received three medals, one each for the Royal Navy, Army and the Royal Air Force in her capacity as Commander in Chief of the Armed Forces - a position she has held since her accession to the throne in 1952. Each medal has five bars on its ribbon, denoting 65 years of service. The Duke Of Edinburgh received a Royal Navy Long Service & Good Conduct medal, with six bars on the ribbon, to recognise 75 years of service. 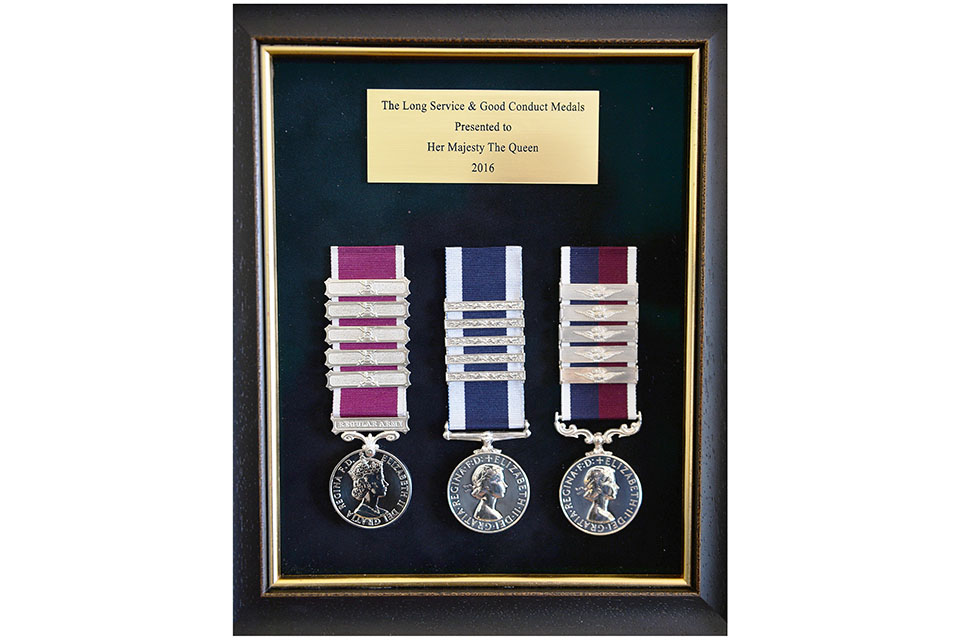 The Queen received three medals, one each for The Royal Navy, Army and the Royal Air Force. Picture John Stillwell/Press Association

Outgoing Defence Services Secretary Lieutenant General Richard Nugee, the Chief of Defence People, who presented The Queen and The Duke of Edinburgh with their medals, said:


It was the greatest honour to present our Commander in Chief and the Duke of Edinburgh with medals that recognise their ceaseless long Service in the Armed Forces.
​
The extension decision follows an independent review of military medals in 2014. In addition to this, the Defence Secretary has also announced that the clasp to the medal will be awarded for every further period of 10 years served and that there will no longer be a permanent bar to anyone receiving the medal.

Anyone have the detail of the rules on eligibility please? (Asks someone who left in 2014 with 27yrs and 10 months service, and is still seving Her Majesty the Queen of New Zealand)

"Officers who left the Regular Forces prior to 29 July 2014 are ineligible for the
medal."