News story: The power of science and engineering in Defence

Yesterday, 19 March, the Royal Navy invited 300 young people to take part in an engineering challenge. The budding engineers were given the scenario; a small tropical island, severely hit by a hurricane. The only access route to the island is the harbour which is blocked with debris, preventing relief aid from being delivered.

The children, aged between 14 and 18 had to design and build a vessel that would clear the objects from the surface of the water and sea-bed of the harbour, allowing aid to reach the islanders.

Amy Colley and her team from University Training College in Norfolk won one of the 11 awards presented at the challenge. She said:


The competition has been a really good experience for us to learn the best ways of doing the best job.

I have wanted to join the Royal Navy for years, so the UTC course is the best option for me. I love boats, love water and I love engineering and it all adds together for me to be in the Navy.
​
The relationship between the Royal Navy and University Training Colleges allows tomorrow’s engineers to learn and develop their skills, and to see the difference their skills can make. 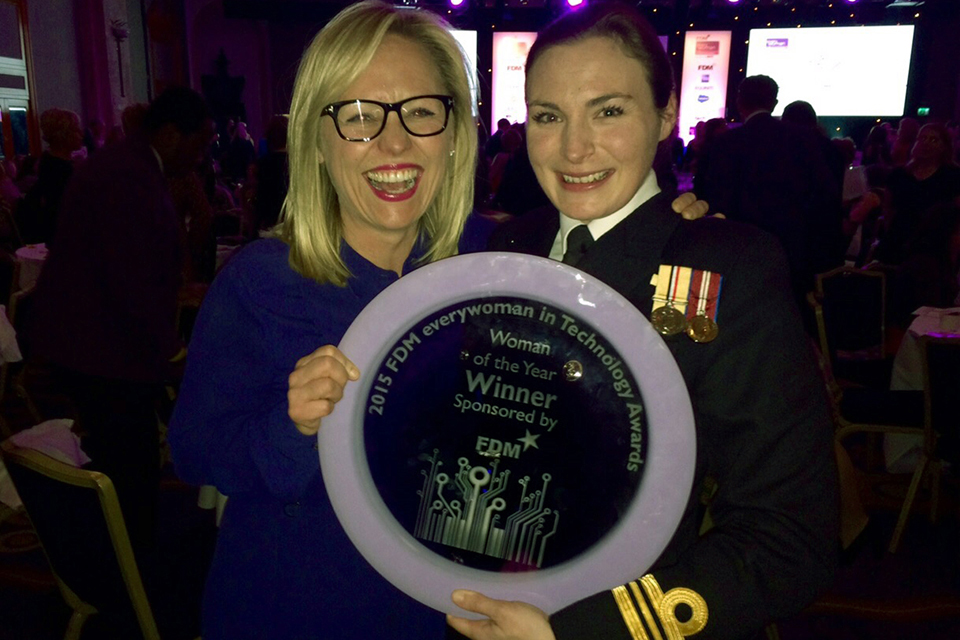 Earlier this week, Lieutenant Commander Roxane Heaton was named 2015 Woman of the Year at the FDM everywoman in Technology Awards.

Roxanne was picked out of all the hopefuls to win the overall title at the award ceremony that focuses on women who have transformed the technology industry.


It was amazing being in a room full of such inspirational women.

I’m proud to be part of the Royal Navy and a member of our Naval Servicewomen’s Network, where the benefits and the need for diversity and inclusion are paramount and where there are so many opportunities for women wishing to explore different areas and careers.

It’s a really exciting time for technology, may it continue to drive more people to make big changes that benefit people, health, research and the economy here in the UK and across the globe.
​
Roxanne’s work has contributed to the development of joint, coalition and NATO policies that are providing more cost effective and forward leaning solutions that can be used across the Navy and its allies.


It isn’t just the Royal Navy demonstrating the benefits of technology and innovation in defence. Just this week, the Defence Science and Technology Laboratory (Dstl) re-opened its newly refurbished indoor ballistic range, but instead of cutting the ribbon with scissors, they used a bullet – showcasing their expert skills.

This specialist facility allows Dstl to undertake vital protection studies and has played a key role in informing the development of armour and protection systems for UK armed forces, especially over recent years for the conflicts in Iraq and Afghanistan.

The latest RAF addition to the Bloodhound SSC team, from 71 Inspection and Repair (IR) Squadron have started building the tail fin designed to remain perfectly straight despite being exposed to the most extreme forces on the planet.


The tail fin is going to be the hardest working aerodynamic device in the history of aviation and will need to be very precisely made, using a very special set of skills.

Not only have we got top engineers joining us from the RAF, we’ll also be working closely with the British Army’s engineers, who will be helping us with structures and support equipment.
​
Watch Royal Electrical Mechanical Engineers working on the supersonic car


These highly skilled experts across the armed forces, and hopeful engineers of the future, demonstrate the importance of science, technology, engineering and mathematics for the defence and security of the UK.

News story: Searching for the military engineers of the future