Ministry of Defence said:
Ambush was commissioned into the Royal Navy to become ‘Her Majesty’s Ship’ during a ceremony overseen by the submarine’s crew, naval base workers and around 500 invited guests. 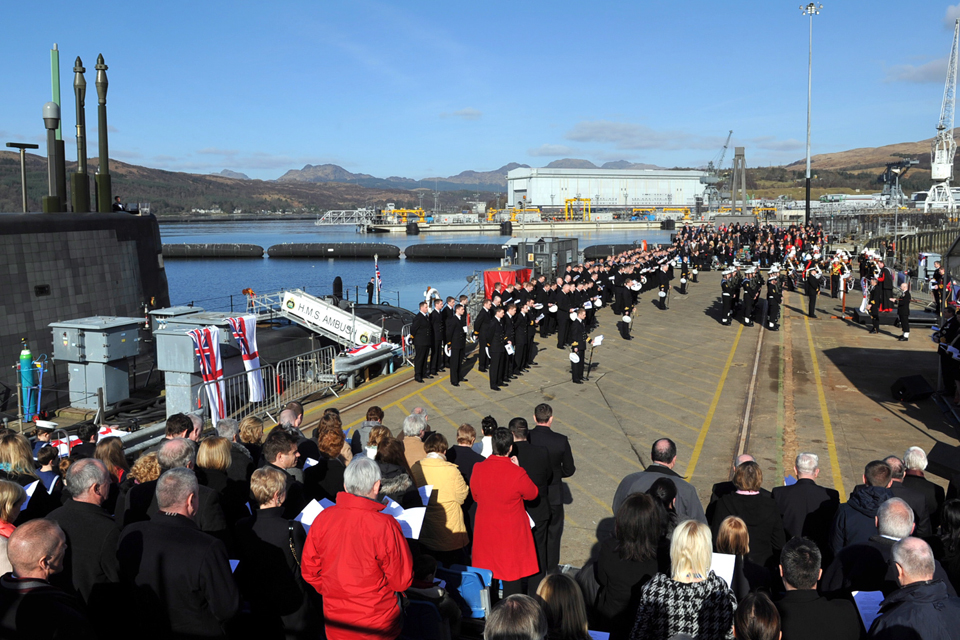 HMS Ambush is commissioned into service at Her Majesty's Naval Base Clyde [Picture: Petty Officer (Photographer) Ian Arthur, Crown copyright]Among the dignitaries attending the event was the First Sea Lord, Admiral Sir Mark Stanhope, and the vessel’s sponsor, Lady Anne Soar, who were joined by representatives from the City of Derby, to which the submarine is affiliated. Also in attendance were proud family members and loved ones of the crew.
Admiral Stanhope said:

It is my great pleasure to welcome HMS Ambush into the Royal Navy fleet during this important and noteworthy occasion.
​
HMS Ambush is the second of the Royal Navy’s Astute Class submarines. These vessels represent the cutting-edge of military technology and the future of UK submarine operations for many years to come.
​
The Astute Class vessels will contribute significantly to our mission of protecting the UK’s interests worldwide.
​ 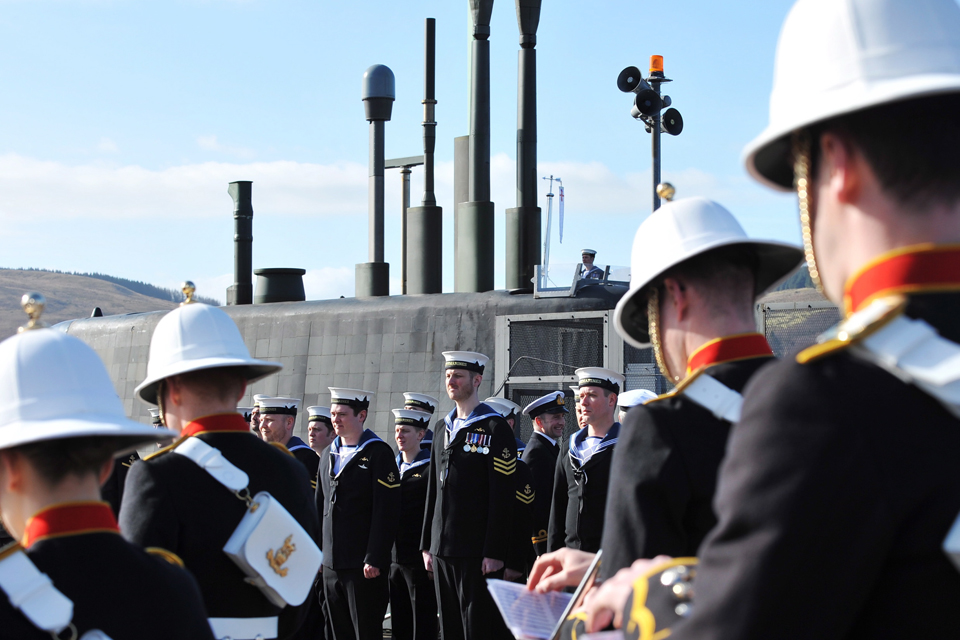 A Royal Marines band at the commissioning ceremony of HMS Ambush [Picture: Petty Officer (Photographer) Ian Arthur, Crown copyright]Launched on 5 January 2011 at the BAE Systems shipyard at Barrow-in-Furness, Ambush arrived at her home port of HM Naval Base Clyde on 19 September 2012.
Since then, Ambush has undergone extensive sea trials to ensure she is ready to become part of the fleet, with the White Ensign being raised for the first time on 18 January after the signing of the ‘certificate of acceptance’, transferring the submarine from her builders to the Ministry of Defence.
The Commanding Officer of HMS Ambush, Commander Peter Green, said:

The crew are immensely proud to mark the commissioning, and to see the culmination of many months of hard work readying HMS Ambush for service with the Royal Navy.
​
HMS Ambush’s crew are now looking forward to the challenges ahead and to exploring the full range of the submarine’s capabilities before she enters full operational service later this year.
​ 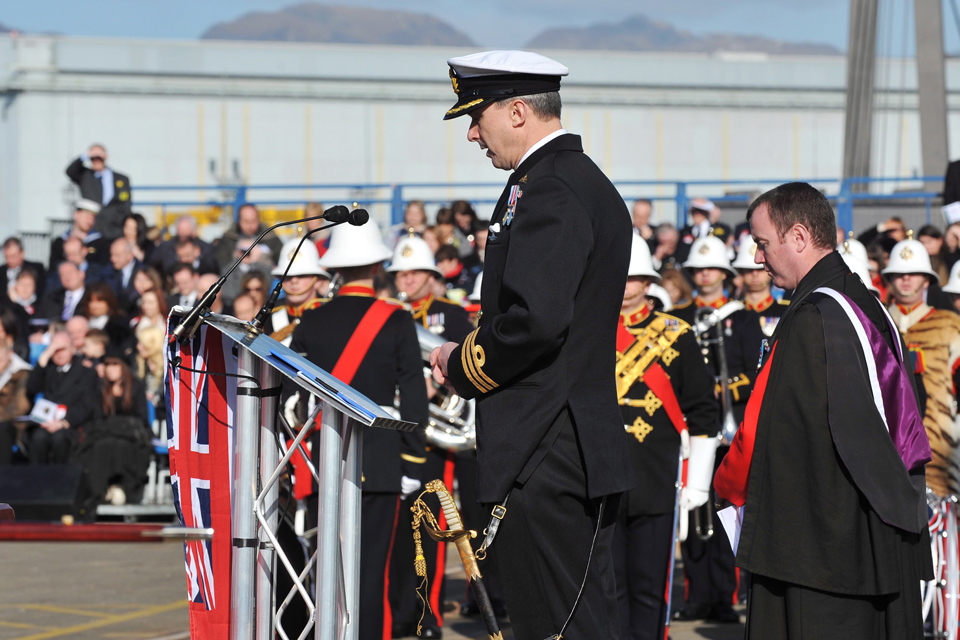 The Commanding Officer of HMS Ambush, Commander Peter Green, addresses the crowd at the commissioning ceremony [Picture: Petty Officer (Photographer) Ian Arthur, Crown copyright]As the home of the UK submarine service, all 7 Astute Class vessels will eventually be ported at HM Naval Base Clyde. The first of class, HMS Astute, entered service with the Royal Navy in August 2010.
HMS Ambush is expected to complete sea trials and be formally handed over to the operational control of the Royal Navy later this year.
The other 5 vessels, Artful, Audacious, Anson, and the as yet unnamed boats 6 and 7, are currently at different stages of build and development.

Super Moderator
I don't think much of the author of the articles knowledge, it's not the "crew", it's the ships company, the boats will be based at Faslane, not ported although they could have said base ported. and it says the last 2 boats haven't been named yet, if they phone a friend I think they'll find the names Ajax and Agamemnon on the list. The piccy's are photoshopped anyway as the sun is shining ......pedantic mode off .

Oh no launched by pigpen Sloans missus - the boat is doomed

Super Moderator
It's mix and match these days Tre, your not nailed to any class/type of boat anymore with the exception of SWS ratings (and it's ships company FFS!! ).
F

What's the mast with speakers and flashing orange light for? Is that for special police type ops: Voice out of the dark "Pull over, you're nicked" kind of thing?

Super Moderator
That's the grimes light Waspie, when on the roof in the dark lets others know to steer clear as there's a nuclear submarine about. I'd hazard a guess the speakers are just for the commissioning ceremony.

WreckerL said:
That's the grimes light Waspie, when on the roof in the dark lets others know to steer clear as there's a nuclear submarine about. I'd hazard a guess the speakers are just for the commissioning ceremony.
Click to expand...

You been on a DTS?:slow:

Super Moderator
Waspie is an anagram of Flymo only using different letters...*creeps away in embarrassed fashion*
R

WreckerL said:
Waspie is an anagram of Flymo only using different letters...*creeps away in embarrassed fashion*
Click to expand...

I was using the wrong code book. You don't use Enid Blyton's 'Five go wild in Thailand' then!!!!!
N

trelawney126 said:
One of the crew is sporting a bomber pin in the photo
Click to expand...

Perhaps he's learnt the error of his ways!

witsend said:
Every boat has a gayer.
Click to expand...

What boats were you on

Waspie said:
I was using the wrong code book. You don't use Enid Blyton's 'Five go wild in Thailand' then!!!!!
Click to expand...

No but I've got the DVD though!

Super Moderator
Like one of these you mean Wits

Considering his sexual preferences he'd have made an ideal bomber queen
You must log in or register to reply here.