The game-changing technology developed by the Defence Science and Technology Laboratory (Dstl) and UK industry partners, known as SAPIENT, saw British sensors making autonomous decisions, like what and how to monitor activities, as they searched a mock urban battlefield in the Canadian city and flagged dangers to soldiers taking part in the experiment.

With current in-service technology, troops have to man live feeds from systems similar to CCTV cameras to monitor enemy movement during urban operations on complex city streets. The SAPIENT tech takes that load off the soldier and reduces the risk of human error, as well as reducing troops in the operations room – freeing them up for other military activity.

The British system was featured alongside a whole host of experimental tech from a range of nations, including robotic exoskeleton suits to help soldiers with the burden of heavy loads, night vision and surveillance systems. British troops are also expected to test the tech in the UK in the future.


This British system can act as autonomous eyes in the urban battlefield. This technology can scan streets for enemy movements so troops can be ready for combat with quicker, more reliable information on attackers hiding around the corner.

Investing millions in advanced technology like this will give us the edge in future battles. It also puts us in a really strong position to benefit from similar projects run by our allies as we all strive for a more secure world.
​
The tech was put to the test in the Contested Urban Environment experiment (or CUE 18) - the biggest experiment of its kind in recent years, which is also set to come to the streets of Britain. It brings together Five Eyes allied nations of the Australia, Canada, New Zealand, the UK and USA to put the very latest cutting-edge technology in the hands of soldiers on the ground.

Over 150 government and industry scientists and over 80 Canadian troops have been working in the city for three weeks, culminating in a complex exercise on the streets and other locations around the city, including an industrial location known as Silo 5, a huge abandoned grain store close to the historic Old Town area. 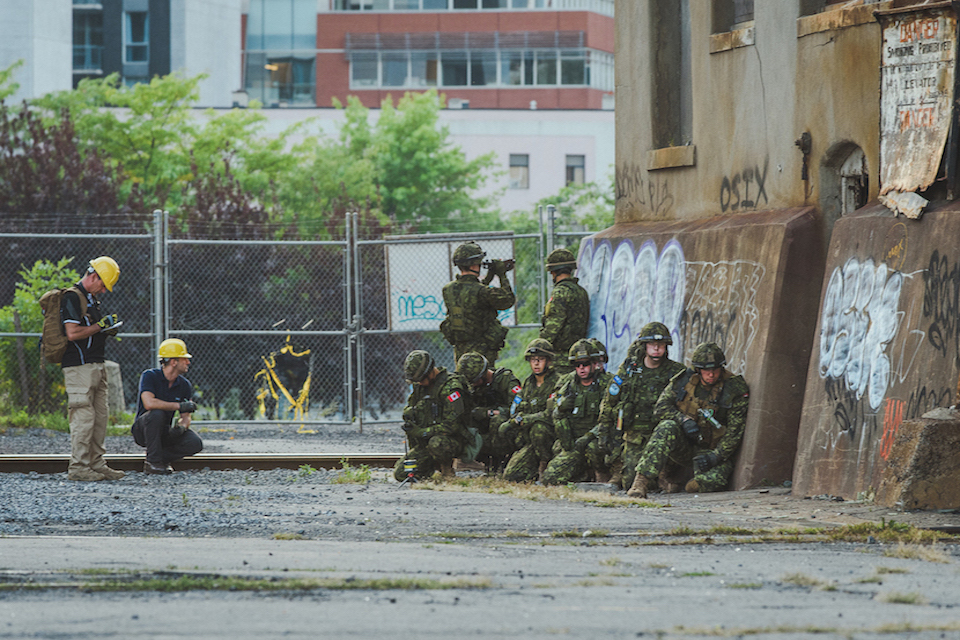 In addition to SAPIENT, a range of unmanned aerial and ground vehicles and soldier technologies were also used to relay information to an operations centre for analysis by the scientists and military personnel. Planes above the city sent autonomously refined information back to human operators down below. Combining all of these technologies from across the different nations, it was possible to generate information that could be fed to soldiers and military commanders – significantly enhancing their situational awareness.

The UK’s SAPIENT technology is the result of multi-million-pound research which has taken just five years to develop. It was jointly funded initially with Dstl and InnovateUK, and from 2016, exclusively by Dstl. Standing for Sensors for Asset Protection using Integrated Electronic Network Technology, SAPIENT uses automation and artificial intelligence to ensure that the military user is presented with the information they need at the time they need it, including unusual activity - like people near a checkpoint or changes in behaviour.

Some of the sensors were actually carried by the soldiers, whilst others were placed on the ground.


We need to develop the practical solutions to a lot of the aspirations that we want. It brings together our requirements as a user and Dstl as scientific advisers for the expert view. The strength of CUE is that we’re developing things with our key allies in the five-eyes community.
​
Dstl’s Chief Executive Gary Aitkenhead, said:


This is a fantastic example of our world-leading expertise at its best; our scientists working with our partner nations to develop the very best technology for our military personal now and in the future.
​
The first Contested Urban Environment experiment took place in November 2017 in Adelaide, Australia. Two additional experiments are being planned for 2019 in the US and again 2020 in the UK. Technology tested during this time could mean availability to military personnel by 2025.

Press release: Wearable sensors to help troops on the frontline