The RAF will be the lead presentational service, in its centenary year, for a new show marking the theme of ‘The Sky’s the Limit’.

The band of the Royal Air Force College, and pipers and drummers from across the Service, will play a central role in the world famous show. Three serving RAF personnel also star in this year’s Tattoo advertising campaign.

In 2 of the adverts Flight Lieutenants Jonny Dowen (main image) and Mikaela Harrison, from RAF Conningsby’s 29 Squadron and RAF Falcons display team, transform from a highland drummer into a Typhoon pilot, and from a highland dancer into parachutist. In a third version, RAF Honnington’s Senior Aircraftman Christopher Craig changes from being a RAF Regiment gunner into a bagpiper (below). 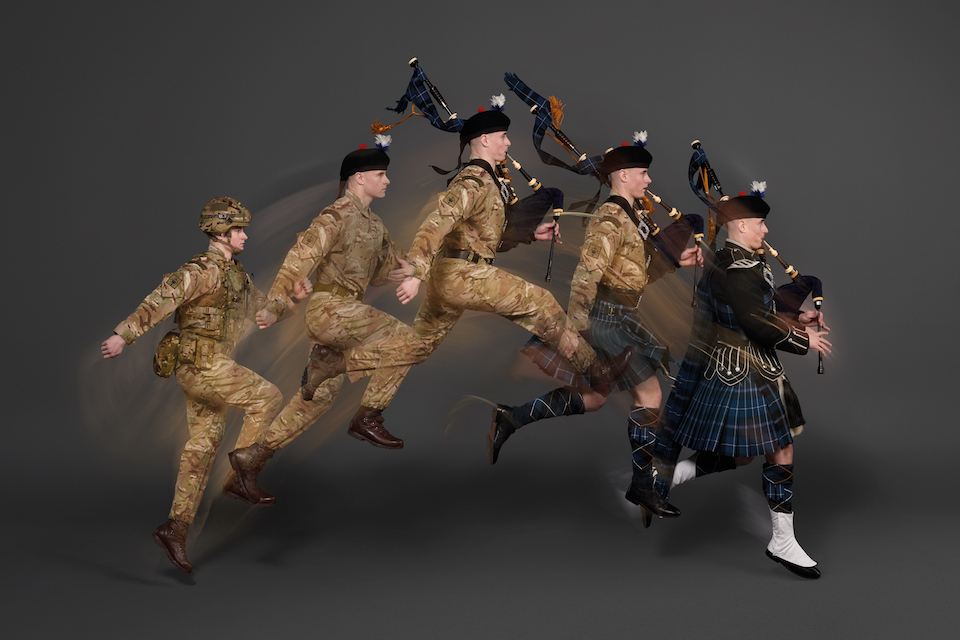 
We are delighted to support RAF100 in their role as the lead Service at this year’s Tattoo. Under our own theme of The Sky’s The Limit, we will explore gravity, the history of manned flight, even into space, and the power of human potential.

We are looking forward to exploring all manner of creative possibilities and collaborations in the production, in the international cast, in the music, in the lighting and projection and in special effects. There are exciting prospects, some of which are out of this world!
​
Taking place against the iconic backdrop of Edinburgh Castle to a live audience of 220,000, the Tattoo extravaganza returns for 24 performances with a 100 minute showcase of music, dance and technical wizardry, including some of the world’s finest military bands and performers.

The Tattoo was set up and run for charitable purposes. It has gifted £10 million to service and civilian organisations including the Soldiers Charity (formerly known as the Army Benevolent Fund) and RAF Benevolent Fund.