News story: Searching for the military engineers of the future

Ministry of Defence said:
The Big Bang Fair is an exhibition designed to showcase the best of British science and technology to young people aged between 7 and 19 who could be the country’s future engineers.
The exhibition and National Science and Engineering Week, which began on 15 March and runs until 24 March, are shining the spotlight on how science, technology, engineering and maths relate to our everyday lives.
A group of Army personnel from the Royal Electrical and Mechanical Engineers (REME) were on hand at the Big Bang to explain how they are playing a vital role in the Bloodhound supersonic car project.
Bloodhound is the groundbreaking UK project which aims to design and build a car capable of 1,000 miles per hour, eclipsing the current British land speed record of 763 miles per hour set by the Thrust supersonic car in 1997.
A team of 5 REME engineers are assisting RAF pilot Wing Commander Andy Green, who will drive the new car, with the construction and maintenance of the car and will be an integral part of the success of the project, both in the UK and during the record attempts in South Africa this year and in 2014.
Staff Sergeant Neil Gallagher from 155 (Wessex) Transport Regiment (Volunteers) is one of the REME team attached to the project.
With a replica shell of the famous car as a backdrop at the Big Bang, Staff Sergeant Gallagher said that the youngsters visiting the exhibition have been very interested in the project:

The kids are really excited to see people like myself who have actually worked on the car and seeing what the Army can offer in the engineering side.
​
Even some of the parents question what the Army’s involvement is, so we explain that we’re mechanics and we fix everything from motorbikes through to main battle tanks and even helicopters. Why not use our skills on the land speed record like this?
​
With hundreds of youngsters interested in the project, explaining the military’s role is of utmost importance to also interest them in an engineering career in the Forces. 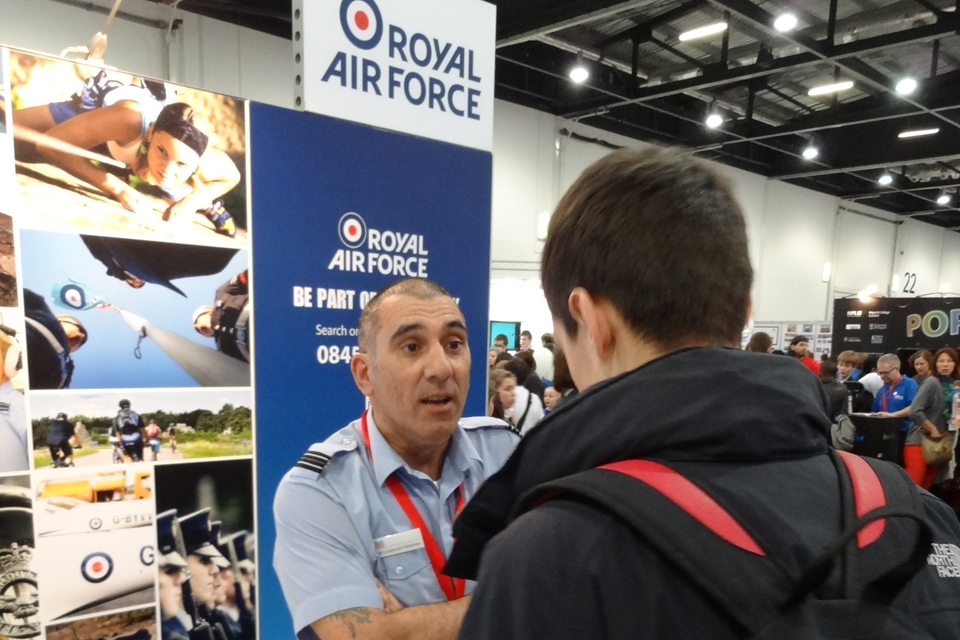 At the RAF stand, Flight Lieutenant Andy Rahaman talks about the role of science and technology in the military [Picture: Crown copyright]Another member of the Bloodhound REME team is Corporal Lisah Brooking who is a vehicle mechanic in 3rd Battalion The Yorkshire Regiment. She said:

A lot of the kids have already heard about Bloodhound, so when you ask them questions they’re just firing back the answers to you. For the ones who haven’t heard of it, we give them the information they need and hopefully that will get them interested in engineering within the Army.
​
Also representing the Armed Forces at the Big Bang Fair were members of the Royal Navy and the Royal Air Force.
The Navy personnel also had some interesting kit on offer to attract the attention of some of the budding engineers at the exhibition.
Engineer Officer recruiter Lieutenant Craig Sharland explained:

We have a gas turbine engine, a W121, which is the engine used in the Type 45 destroyer, our most efficient and advanced engine.
​
I use the model to explain to the kids how engineers design these things to make them more efficient. We also use them to explain that engineers in the Navy are responsible to the command and making sure that all the kit remains operationally capable at all times.
​
Also searching for the engineers of the future was the RAF’s Wing Commander Dave Wynn:

We come to events like this to speak to young people and try to help them achieve their hopes, aims and ambitions. We need lots of engineers and technicians.
​
When you look at intelligence, communications and even flying, there is a large technical element. Science and technology leads to lots of other elements, not just engineering.
​
For more information about engineering roles within the Armed Forces, please see:

News story: The power of science and engineering in Defence