Ministry of Defence said:
HMS Argyll was on operations approximately 20 miles off the Cape Verde coast when she received news that a fisherman onboard the trawler Wakashio Maru No 82 had been seriously hurt in an accident 24 hours earlier. His crewmates had been looking after him after he fell into the ship’s bilge but his condition had worsened.
The Plymouth-based warship immediately sprang into action, deploying her seaboat and onboard medical officers to the Japanese trawler to assess the extent of the man’s injuries.
HMS Argyll’s doctor, Surgeon Lieutenant James Perry, who had only joined Argyll 6 weeks earlier, was quickly able to stabilise the head injury but realised the patient needed urgent hospital treatment.
As a result, Argyll’s Lynx helicopter was dispatched to the scene, where the injured fisherman was carefully winched aboard and flown to the closest hospital in Praia, Cape Verde.
Flight Commander Lieutenant Ben Jewson, pilot Lieutenant John Phillips and winchman Leading Aircraft Engineering Technician Dan Carroll had to overcome the myriad of obstructions on the deck of the trawler to try and reach the injured man. 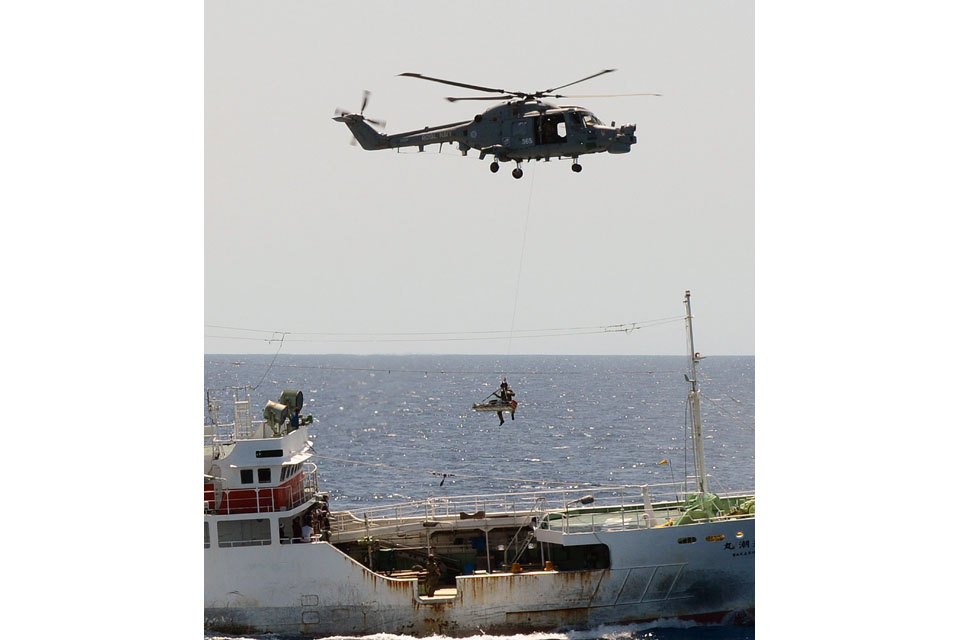 Winch transfers test the skill of all people involved and one slip up could have catastrophic consequences - however any thoughts of that pale into insignificance when you have the opportunity to potentially save someone’s life. I’m just so glad to have played a part in this rescue.
​
Leading Medical Assistant Andy O’Toole said:

My training and previous experiences, including time served in Afghanistan, have helped prepare me for situations like this but nevertheless it gets your adrenalin pumping. I am sure the treatment he received from us and the further treatment from the Cape Verde hospital will help him in his recovery.
​
Following the rescue, HMS Argyll returned to her operations working alongside the Cape Verde Coast Guard and judicial forces before continuing her work with west African nations.
HMS Argyll’s Commanding Officer, Commander Tim Neild, said:

As soon as the call came in our natural reflex to assist a fellow mariner kicked in. We were quickly able to assimilate all the information and put a comprehensive recovery plan in place.
​
I am immensely proud of the way my ship’s company reacted to this short-notice tasking, which is a testament to the agility and flexibility of the modern Royal Navy, capable of dealing with rescues like this at one end of the spectrum all the way through to ‘whites of the eyes’ war-fighting at the other. I sincerely hope that the Japanese fisherman makes a full recovery.
​
On completion of her tasking in the Atlantic, the ship will undertake a number of important regional engagement visits before returning to her Devonport home in September 2013.

:Nice bit of winching going on wings!!! Watch out for that swing :salut::winkrazz:
You must log in or register to reply here.