Ministry of Defence said:
While in the port of Doha, Qatar, HMS Monmouth hosted 25 NATO parliamentarians to showcase the ship and her capabilities.
Led by British MP Sir John Stanley, the Transatlantic Defence and Security Cooperation Sub-Committee comprised delegates representing 11 different NATO countries. Their visit to the Type 23 frigate was part of a mission to examine the contribution of the armed forces of NATO member countries to the security and stability of the region and to understand current military operations.
Speaking of the visit, Lieutenant Pete Hovington, Monmouth’s deputy marine engineer officer, said:

This visit has provided a great opportunity to bring to life the interface between politicians and the assets which are charged to deliver an overall military effect.
​ 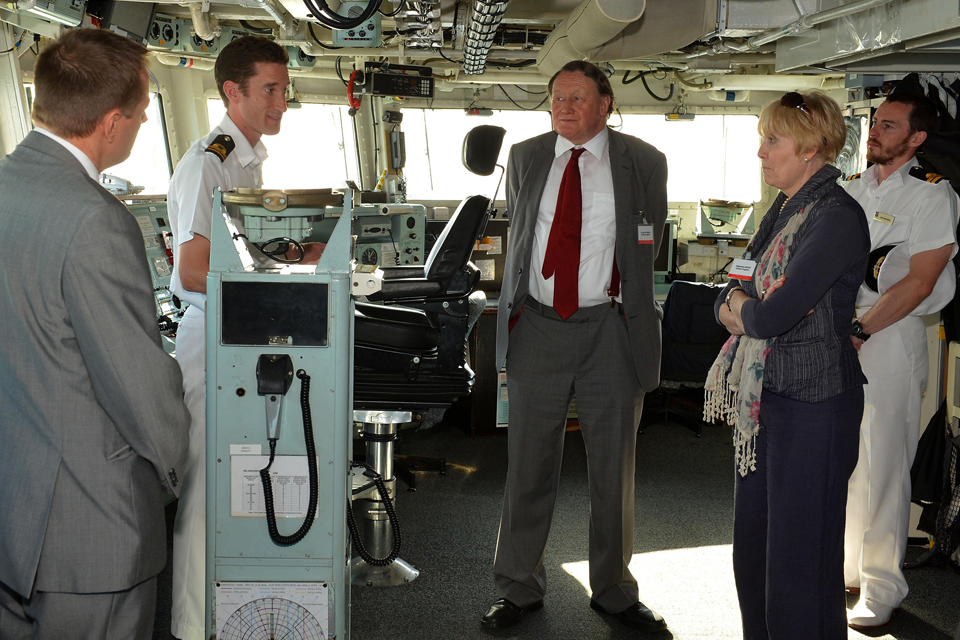 Monmouth's navigating officer briefs Sir John Stanley and other NATO delegates on the bridge of HMS Monmouth [Picture: Leading Airman (Photographer) Will Haigh, Crown Copyright/MOD 2013]The visitors were given a tour of the ship, also known as ‘The Black Duke’, which patrols the busy trade routes of the Gulf in support of Combined Maritime Forces.
The UK is committed to a regular presence in the Gulf to ensure freedom of navigation in international waters and the Royal Navy has been operating in this area for over 30 years, with HMS Monmouth herself conducting 4 deployments to the region over the past 5 years. The missions protect UK and worldwide trade routes by restricting the illegal trafficking of drugs and weapons, and by countering piracy.
Prior to visiting HMS Monmouth, the NATO delegates visited the Royal Navy’s mine countermeasures vessels HMS Atherstone, Ramsey and Shoreham which are stationed in Bahrain.

Navvy to lady "You go below decks and bend over to look for the golden rivet. It's an old tradition that you will thoroughly enjoy"
You must log in or register to reply here.