News story: Royal Navy sailor killed during World War 1 is honoured as he is laid to rest

The service, organised by the MOD’s Joint Casualty and Compassionate Centre (JCCC), part of Defence Business Services, was conducted by the Reverend Andrew Hillier RN. The Royal Navy provided the bearer party and firing party for the ceremony. 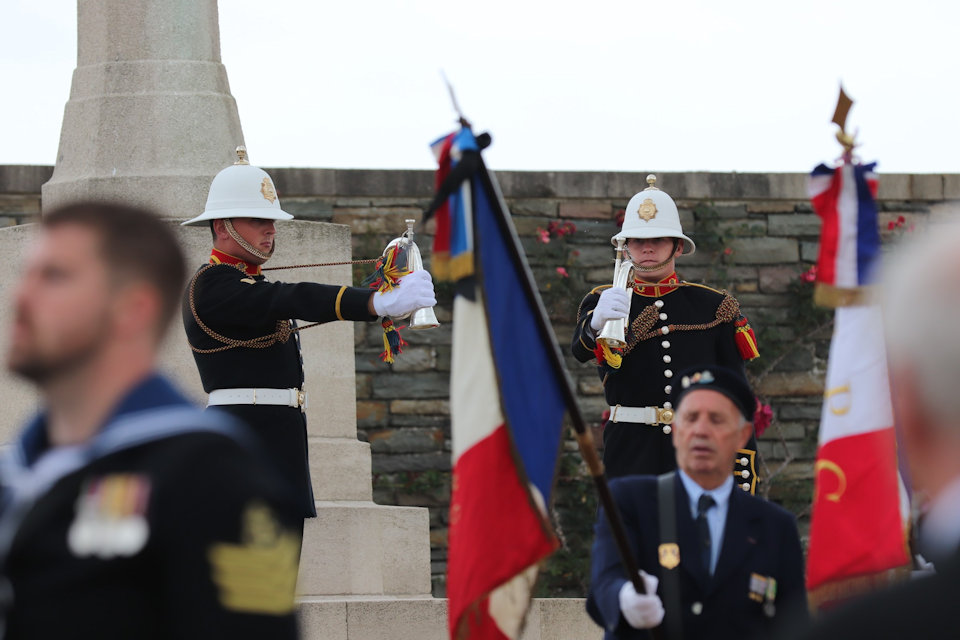 Two buglers from the Royal Navy played during the service, Crown Copyright, All rights reserved


Being able to give a name to this brave sailor has been incredibly rewarding. Attending the service today to see the culmination of months of hard work was truly an emotional experience. We will remember them.
​
AB Robertson joined the Royal Navy in October 1914. After completing his training, he was drafted into the Hood Battalion in July 1915. He went on to serve in Gallipoli and Northern France, being wounded several times during the war. In January 1917, he joined the Anson Battalion and it was during fierce fighting, when the village of Gavrelle was captured, that AB Robertson lost his life on 28 April 1917. AB Robertson was aged 28. 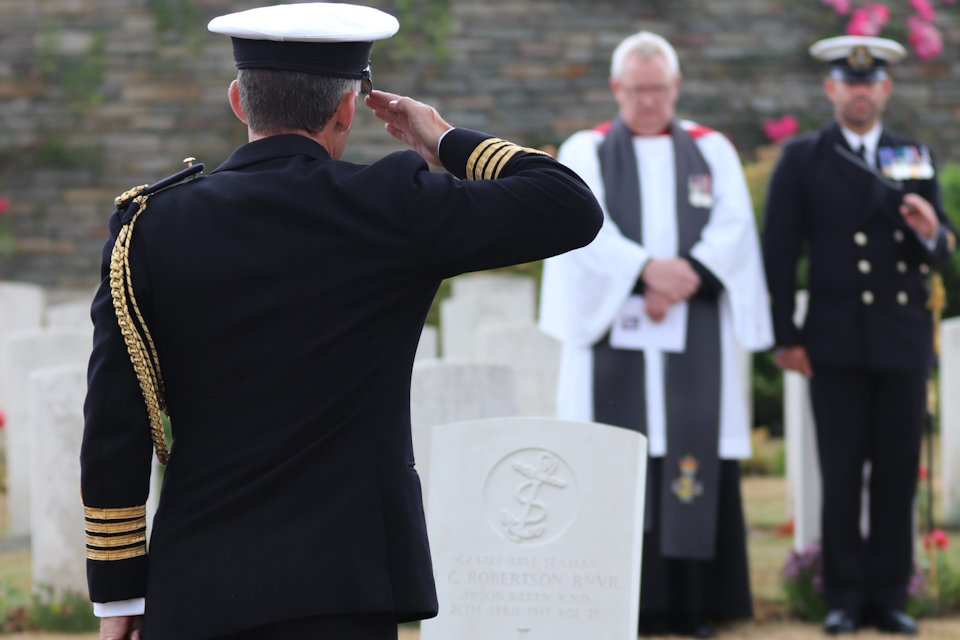 For a century AB Robertson’s final resting place was unknown to his family. However, when construction work began on the outskirts of the village of Gavrelle the remains of a British sailor were uncovered. Alongside were a small number of artefacts, Anson Battalion shoulder titles that were still attached to the uniform and shoulder titles for both the Hood Battalion and RND, which were found in one of his pockets. 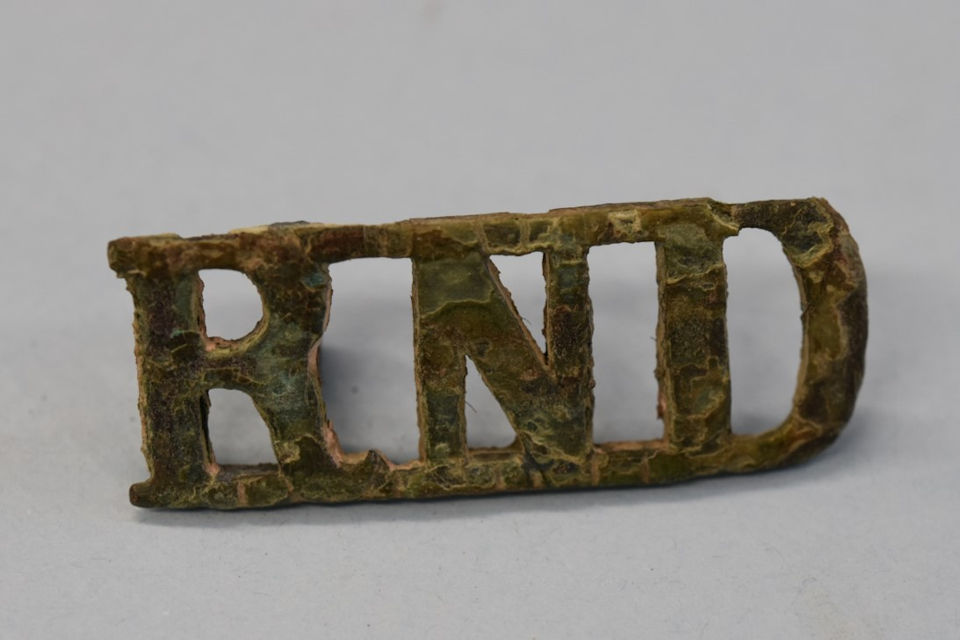 Further research undertaken by the JCCC showed that the location of the soldier was exactly where the Anson Battalion had been stationed during the capture of Gavrelle on 28 April 1917. The dedicated team narrowed down the list of possible candidates to 2 men. Their descendants were traced and DNA testing came back positive for James Cameron Robertson. 81-year-old nephew Frank Treasurer was the match and he attended today’s service. 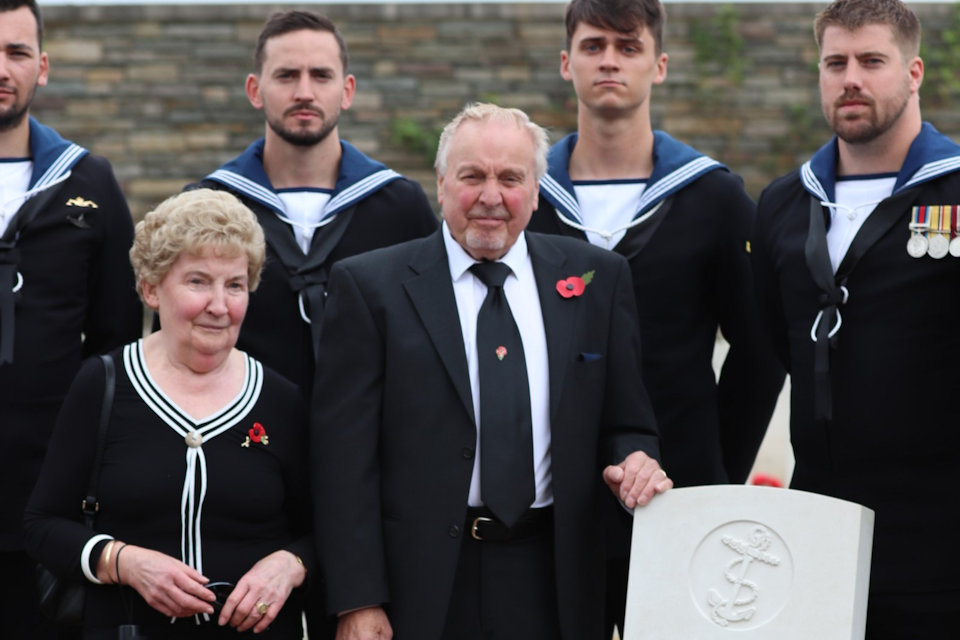 Nephew Frank Treasurer standing with his wife and members of the Royal Navy beside the grave of AB Robertson, Crown Copyright, All rights reserved


Today was a sad and poignant day, however it was also a celebration of James and his comrades’ courage and bravery. We were very glad to be here today to witness him finally being laid to rest.
​ 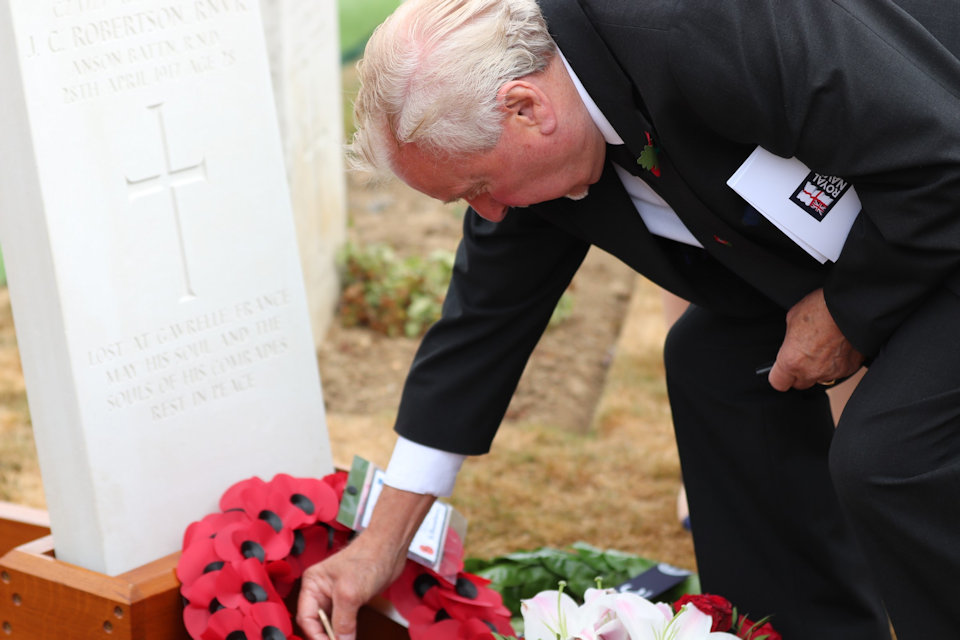 Nephew Frank Treasurer places a poppy at the headstone of his uncle, Crown Copyright, All rights reserved

James Robertson was born on 21 April 1890 in Charles Street, Aberdeen. He was the eldest of 6 siblings and was listed in the 1911 census as being a shop assistant.

WO1 Darren Wearing, who was leading the Royal Navy today said:


It was an absolute honour and a privilege to have been part of today’s proceedings. I’m proud that I have been able to lay a fellow sailor to rest along with all his other shipmates. I’m extremely proud of all my staff and Naval Ratings that took part today, they ensured that James had the best send-off possible in the high standards and traditions of the senior service.
​
Steve Arnold, CWGC:


I was honoured to be able to recover Able Seaman Robertson from the battlefield where he lay for 100 years and privileged to be here today to see him laid to rest alongside his comrades. We will care for his grave here at the Commonwealth War Graves Commission’s Orchard Dump Cemetery forever.
​ 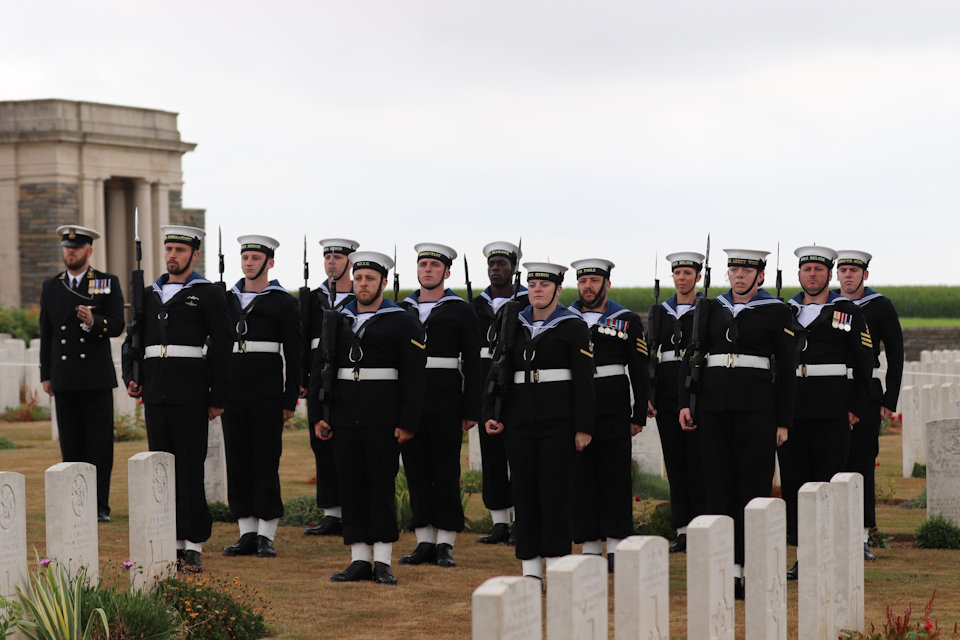 A new headstone bearing AB Robertson’s name has been provided by the CWGC. 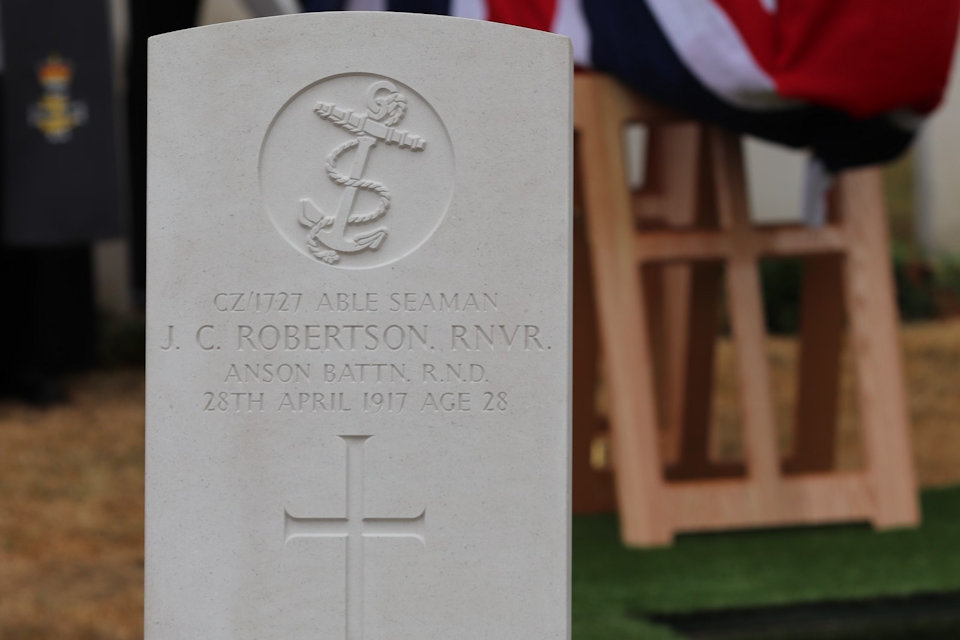 What has the AB in the guard front row far left got pinned under his Dophins ???