Ministry of Defence said:
For 2 weeks the multinational exercise will involve more than 30 warships, over 65 aircraft and more than 12,000 people.
As part of a scenario in which they responded rapidly to a developing threat, Royal Marines from 42 Commando were landed several miles inshore of Cape Wrath by Chinook and Sea King helicopters to attack the target positions.
Supported by 4.5-inch guns on HMS Diamond and HMS Westminster, plus the 105-millimetre light guns of 29 Commando Regiment Royal Artillery, the marines took around 3 hours to push their way through the enemy to reach the shore.
The marines of 42 Commando also used their own 81-millimetre mortars, along with those of the Swedish marines taking part, as well as general purpose machine guns to launch an all-out attack on the target positions. 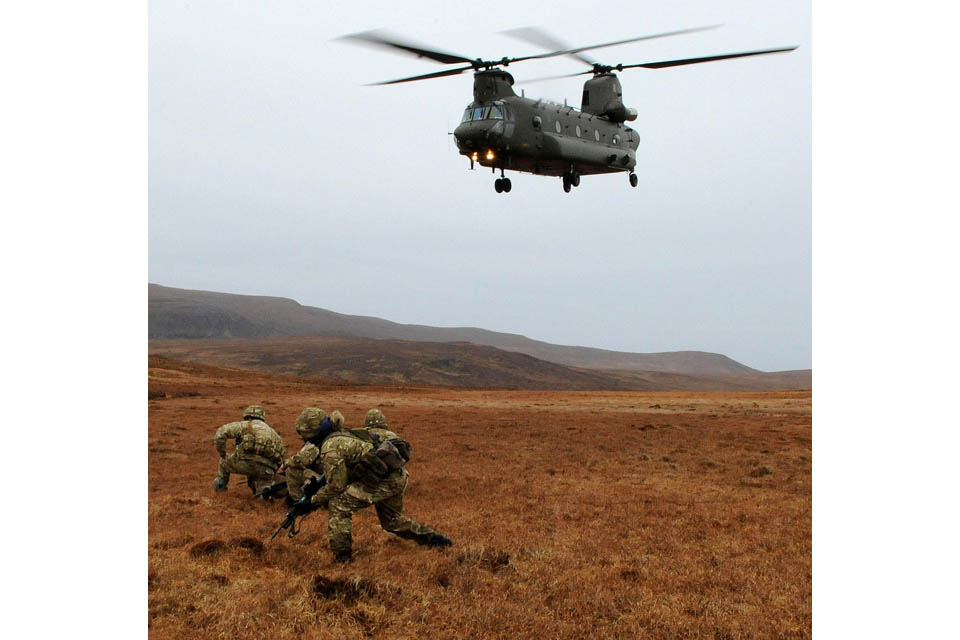 Royal Marines of Juliet Company, 42 Commando, being inserted into the field by an RAF Chinook [Picture: Leading Airman (Photographer) Jason Ballard, Crown copyright]Following the training exercise they then launched a night-time raid on the same area.

This is exactly how it would happen in a real life situation,” said Captain Dave Thatcher, 29 Commando Regiment, one of the training team managers. “All the ammunition being used is live, and when the marines get to the targets they will see something there that will denote it is a position they are meant to attack. It is as realistic as we can get.
​
It is also one of the few places in the UK where we can practise this type of large-scale firing exercise. This particular part of the exercise is all aimed at getting 42 Commando back to contingency as part of the Lead Commando Group.
​
As part of 3 Commando Brigade’s Lead Commando Group, 42 Commando will be ready to react to rapidly unfolding world events as they happen. Exercise Joint Warrior draws on their core amphibious assault skills rather than those used on land operations such as Afghanistan.
Brigadier Martin Smith, Commander of 3 Commando Brigade, said:

While the Lead Commando Group can undertake a wide range of missions, we need to be prepared to fight if necessary at short notice and in unfamiliar environments.
​
Joint Warrior, which brings together land and maritime firepower and manoeuvre forces, is hugely important in making sure that we can link together all elements of our capability.
​
As well as the British forces using the exercise areas, Dutch, French and Swedish forces will be practising their firepower in the trenches and on the ranges.