Ministry of Defence said:
Her Majesty’s birthday falls on 21 April, but, in accordance with tradition, when 21 April is a Sunday the Royal Salute is instead fired on the following day.
To mark the occasion, soldiers, horses and guns of the King’s Troop, which is the ceremonial saluting battery of the Household Division, left their forward mounting base in Wellington Barracks at approximately 11am and made their way up Birdcage Walk, past the Queen Victoria Memorial and Buckingham Palace, up Constitution Hill and into Green Park.
The guns are the regiment’s colours and so are afforded due respect throughout the route. 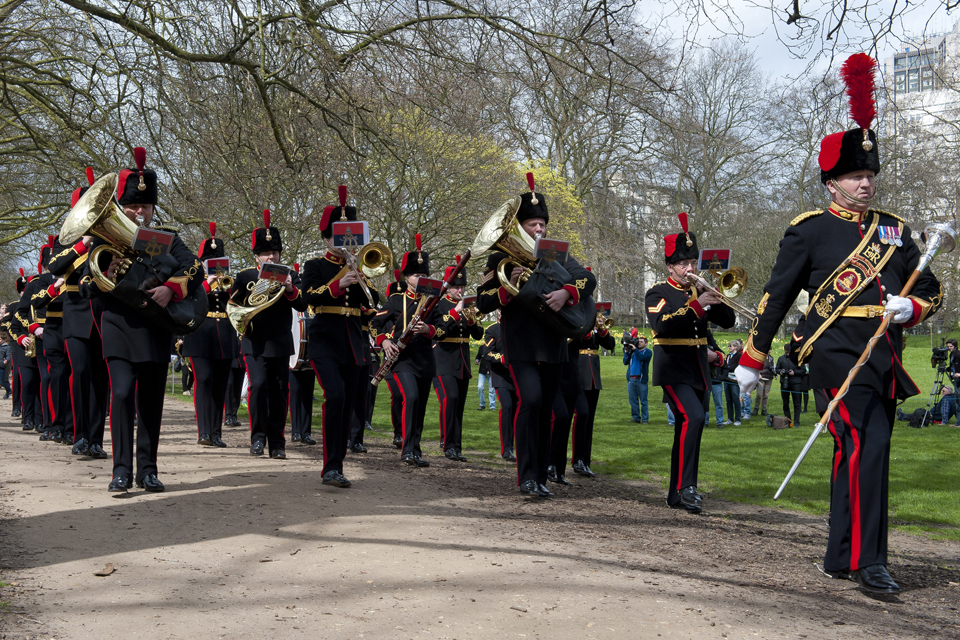 The Band of the Royal Artillery arrives in Green Park in London to entertain the crowds [Picture: Sergeant Jez Doak, Crown copyright]Before their arrival in Green Park, the Band of the Royal Artillery played a selection of celebratory music close to the firing position as 71 horses pulled 6 First World War-era 13-pounder field guns.
The Commanding Officer, Major Mark Edward, and the Parade Commander, Captain John Gibson, the Adjutant, then ensured every man and horse was in position before giving the word of command for each of the 6 guns to fire blank artillery rounds at 10-second intervals until 41 shots had been fired.
The horses and riders then collected the guns and escorted them back to Wellington Barracks in Birdcage Walk. 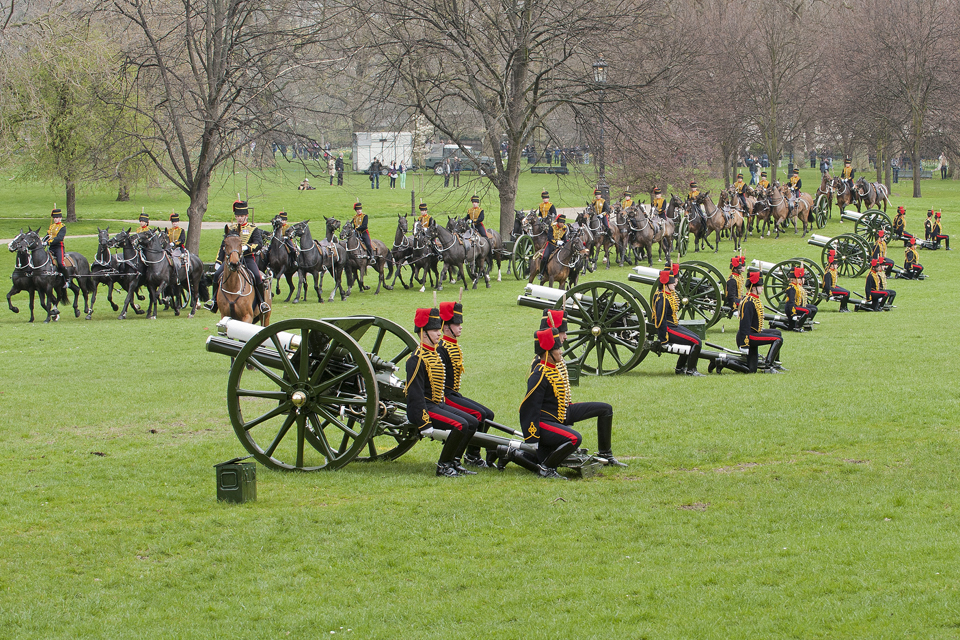 The 6 King's Troop Royal Horse Artillery 13-pounder field guns line up to fire the 41-gun salute [Picture: Sergeant Jez Doak, Crown copyright]The King’s Troop Royal Horse Artillery is a British Army mounted ceremonial unit that fires Royal Salutes on royal anniversaries and state occasions, such as state visits and royal birthdays, and they provide a gun carriage and a team of black horses for state and military funerals.
They provided the gun carriage to bear the coffin of Baroness Thatcher in ceremonial procession to St Paul’s Cathedral on 17 April 2013.
Permanently based in Woolwich, King’s Troop soldiers also have a vital operational role. Trained as fighting soldiers first and foremost, the unit currently has several personnel deployed in Afghanistan.
When the Army mobilises, the King’s Troop Royal Horse Artillery provides HGV drivers who deliver ammunition to artillery units around the battlefield.

BBC stated that a 62 gun salute was fired and the honour to mark the Queens Birthday was given to..........