The burials were discovered during preparatory ground works by Skanska, the contractor which is redeveloping the site on behalf of the Defence Infrastructure Organisation (DIO).

Skanska contacted a team from Oxford Archaeology which established that the burial was ancient.

Further investigations revealed a cluster of at least 11 burials within the area. Artefacts found with the skeletons included a coin of the Roman emperor Valens, who reigned between 364 and 378AD. This indicated that they were likely to date from the third or fourth Century AD, which was the late Roman period in Britain.

The site is currently being redeveloped as part of Project Wellesley, which will deliver world-class training facilities for key support personnel from each of the UK’s armed forces at Worthy Down. It will see the relocation of much of the Defence College of Logistics, policing and administration to the site, which will provide specialist training in areas including catering, supply, transport and military human resources.

The new college will enable the Royal Navy, army and Royal Air Force to train personnel more efficiently and effectively so that they can provide the best possible support for military operations.


The contrast between how these Romans lived and how modern service personnel will live in the new facilities we’re providing is stark, but it’s been fascinating for all of us to see history coming to life around us as the project progresses.

We’re taking every care to ensure that the archaeology is properly excavated, investigated and recorded while also making sure that Project Wellesley is not delayed as a result of this interesting discovery.
​
Tracy Matthews, Archaeology Officer for Winchester City Council, said:


This is a really exciting discovery and has given us the first extensive remains of the Roman period in this area. Analysis of the finds will provide a fascinating insight into the lives and deaths of some of the area’s early inhabitants.
​
For such a small group of burials the new Worthy Down find includes a surprisingly wide range of burial practices. One of the bodies had been decapitated, the head placed between the legs. 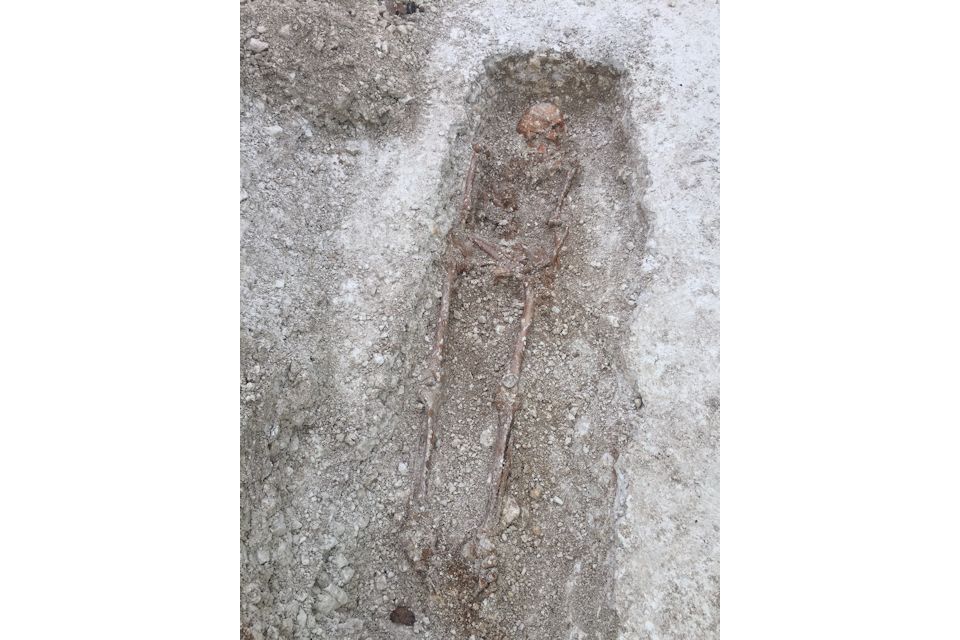 One of the late Roman burials discovered during preparatory ground works for a £250 million training facility. Crown copyright

Two more of the skeletons excavated were found with the bodies and legs fully extended, but lying on their side, a rare practice of which the significance is unknown. A third burial was on its side, but in a crouched position, a rite more commonly associated with pre-Roman burials in Britain.

Seven of the bodies excavated at Worthy Down also seem to have been buried wearing hobnailed shoes or boots, a regular feature of Roman burials. One of the Worthy Down burials is aligned east to west, the most common grave alignment found in late Roman cemeteries.

In contrast the other burials in this group are aligned north west to south east. The choice of location suggests that the burials represent a rural community whose cultural identity was more rooted in local tribal tradition than Roman culture.

A further phase of excavation will take place in the next few weeks to record and recover burials exposed in the adjacent areas.