The station is primarily used for advanced fast jet training for pilots and, whilst the previous infrastructure was strong enough for the Hawk aircraft, it has been restored to support pilots training in the likes of Tornados and Typhoons.

A £20 million contract was awarded to refurbish the ageing runway and its link taxiways. The work undertaken will also provide a new section of airside perimeter road, new visual aids, aeronautical lighting and signage for the air station.

The restoration work will extend the life of the runway by a further 25 years, demonstrating the UK’s commitment to Defence in Wales.


This famous runway has been an integral part of the careers of generations of fast-jet pilots who have seen action across the world and are currently leading RAF strikes against Daesh.

I’m delighted that this investment will see the runway play that vital role for at least another 25 years, training new pilots in the skills they need to help keep us safe when flying the next generation of aircraft.
​
The fighter pilots who graduate go on to fly Typhoon and F35 Lightning II aircraft which secure the skies of the UK and overseas.

The station is also home to helicopter flying training where aircrew learn the skills required for mountains and maritime flying with the Royal Air Force and Royal Navy. The Mountain Rescue Service which saves lives across the UK is also based at RAF Valley. 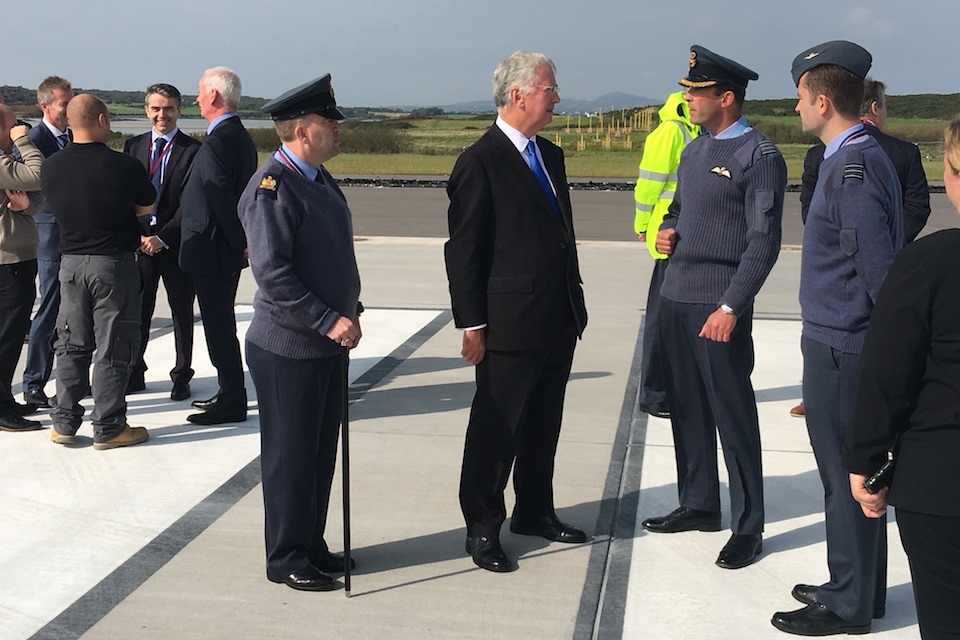 The Defence Secretary met with personnel from RAF Valley this afternoon in North Wales.

All new UK fighter pilots pass through RAF Valley before they reach their frontline Squadron. In the last 3 months, 4 graduates have gone on to fly the world’s most sophisticated fighter, the F-35 Lightning II, out in the United States.

The UK currently has 11 F-35B jets being flown in the US and 120 UK personnel being trained there. By the end of the year the UK will have 14 of the jets, with initial flight trials from the brand new Queen Elizabeth Aircraft Carrier’s deck planned for next year.

As the US’ only Tier 1 partner, UK industry will provide around 15% of every F-35 jet which is built, and later today, the Defence Secretary will also visit the Defence Electronics & Components Agency (DECA), based at MOD Sealand, in North East Wales.

The facility was chosen as the global repair hub providing maintenance, repair, overhaul and upgrade services for F-35 avionic and aircraft components. Over the lifetime of the programme, components for hundreds of European-based F-35 aircraft will be serviced and maintained at the site.

The work will generate hundreds of millions of pounds of revenue for the UK defence industry, with the potential to unlock more than £2bn of future F-35 support revenue over the lifetime of the programme, sustaining thousands of high tech jobs and skills.

A newly-refurbished hangar at RAF Valley will also house three brand-new Jupiter helicopters which will be used to train pilots from all three Services, delivered as part of the UK Military Flying Training System (UKMFTS).

These state-of-the-art Airbus helicopters, which closely recreate the cockpits and controls of front-line aircraft, are due to begin flying from RAF Valley later this year. The refurbishment of the hangar is part of an infrastructure improvement programme being delivered through the UKMFTS at both RAF Valley and RAF Shawbury worth a total of around £80 million.


The visit of the Defence Secretary Sir Michael Fallon today has highlighted RAF Valley’s vital contribution to UK defence as the home of fighter pilot training.

Our team of military personnel, Civil Servants and industry partners take great pride in their role of training the next generation of fighter pilots for the Royal Air Force and Royal Navy. With our refurbished main runway, we are well prepared for the future.
​
UK Government Minister for Wales Guto Bebb said:


This investment in the runway is a huge boost to RAF Valley. It further demonstrates the UK Government’s commitment to defence in Wales and the North Wales economy.

It is great to see Wales playing such an important role in the advancement of our defence services and with an extra 25 years now on the lifespan of this site, the future of RAF Valley and the local economy remains strong.
​
Continue reading...