Ministry of Defence said:
The current incumbents, the German Air Force, were represented by Brigadier General Nolte at a handover of the NRF lead duty to the RAF’s JFACC Air Commodore Martin Sampson at an official ceremony at HQ Air Command.
Leading the NRF is based on a rotational system, and is led by the UK once every 4 years. It is made up of air, land, maritime and special force components that maintain high readiness to deploy around the world, providing immediate military response to emerging crises.
If a crisis occurs requiring NRF response in 2013, the RAF JFAC and his Headquarters will command and control joint air operations. The JFACC will integrate military aAir assets from NATO and tailor the capability to the specific planned mission.
Air Commodore Sampson said:

This is a really important time for the UK JFAC and the RAF. Operations over Libya emphasised how important our role within NATO is as well as underlying the need to maintain a robust air command and control capability.
​
This year holds many uncertainties, the unfolding events in Africa is but one example; however, the UK JFAC is well prepared and confident in its ability to face up to the challenge of leading NATO air power.
​
I would like to thank the whole German JFAC organisation for sharing its experiences of NRF leadership over the past 12 months and to General Nolte for taking the time to hand over formally today.
​
As strong NATO partners, I look forward to our continued dialogue and interaction as we continue to discharge the most vital task of air command and control.
​ 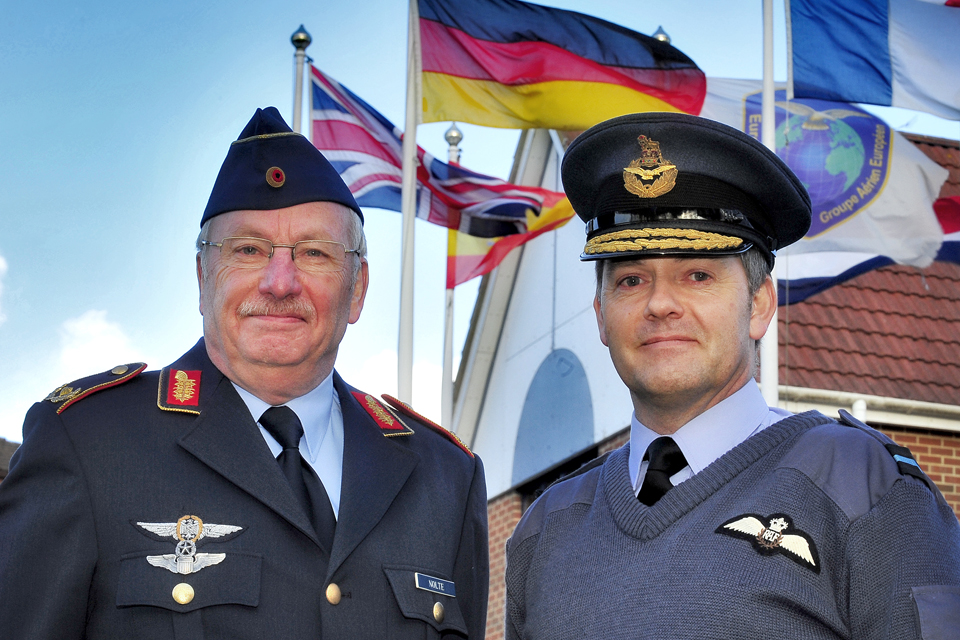 Brigadier General Nolte hands over the NATO Response Force lead duty to Air Commodore Martin Sampson [Picture: Corporal Dylan Browne RAF, Crown Copyright/MOD 2013]The RAF JFAC is staffed by professional and operationally experienced airmen and women from across the Service; expert at delivering the operational capability of the RAF.
Flight Lieutenant Mark Buckley has worked in electronic earfare plans at the JFAC HQ for the past 2 years and has been involved in exercises that have prepared the RAF’s JFACC to take on the NRF role. He said:

The JFAC brings together every branch and trade of the RAF and shows what air power can do; whether it’s intelligence-gathering, shows of force, delivering relief supplies or security operations.
​
Participating in exercises allows experience, corporate knowledge and working practices to be shared and provides an insight into how different HQs operate.
​
Air Command and Control is at the heart of how the Royal Air Force goes about its business and the JFACC is charged with generating, enabling and commanding air power.

The RAF would like to apologise for not responding to your emergency today but the duty crew failed to get the mandated 8 hrs sleep.

Please call again tomorrow when another crew may be able to respond to your emergency.

The RAF thanks you for your interest in saving the free world.

The RAF would like to apologies for not participating in todays NATO/WAR activity but it was raining.

Anybody know what the "electronic earfare" branch is???

dhoby_bucket said:
Anybody know what the "electronic earfare" branch is???
Click to expand...

Both these men are Walts of the first order. Any self repecting serving or ex serving member of the armed forces know that all German Luftwaffe pilots are called Otto, wear a sheepskin lined flying jacket with an iron cross and refuse to be photographed without the white flying scarf. As for the RAF chap he just looks like a Walt.

dhoby_bucket said:
Anybody know what the "electronic earfare" branch is???
Click to expand...

Book Reviewer
Great news, stand easy! Tea and stickies all round!
You must log in or register to reply here.