Ministry of Defence said:
As bad weather hampers communities in the north west of the UK, duty search and rescue crews from HMS Gannet in Prestwick, Ayrshire, were called out 10 times from mid-afternoon on Friday through to Sunday evening.
In addition, an RAF Chinook has commenced delivering essential foodstuffs and aid to stricken farmers in parts of Northern Ireland still cut off after recent heavy snowfalls.
Working alongside the Department of Agriculture and Rural Development to identify priorities the Chinook, normally based at RAF Odiham in Hampshire, will drop off supplies of essential foodstuffs mostly amongst isolated communities in the Glens of Antrim and parts of South Down.
The request for MOD assistance came from the Northern Ireland Department of Agriculture and Rural Development and the RAF team are expected to be working across Northern Ireland for at least 2 days as efforts are made to rescue stock in the hillside and protect livelihoods in the isolated areas.
For the crews from HMS Gannet, 5 of the calls over the weekend were to the Isle of Arran and a further 2 to Northern Ireland – both areas which have been severely disrupted by the unseasonably harsh weather.
Indeed, Saturday’s crew, which went on shift at 9am that morning and off shift 24 hours later on Sunday morning was active for a full 17 hours on back-to-back jobs, responding to call outs to Campbeltown, Broadford on Skye and Arran.
4 of the 10 calls were what is known as Military Aid to Civil Authorities, assistance which can be requested from the services in extreme circumstances by local authorities and the police, amongst others.
During the 60 or so hours, the navy crews not only medically evacuated a number of people from areas cut off by the snow, they also spent hours providing aerial search cover to ensure that no-one was stranded on remote roads, as well as delivering much needed lifeline response, including blankets and flasks to Blackwaterfoot on Arran and hand held radios to police in Brodick on Arran – with no power, the police had been unable to maintain charge in their radios, vital to enable communications whilst going to the aid of islanders.
Friday’s call outs took place in probably the worst of the weather, with heavy snow still falling – after launching at 1530 hours to deliver airwave radios to Arran police, the helicopter returned to the mainland carrying two unwell people to Crosshouse Hospital, Kilmarnock as a precautionary measure.

A Royal Air Force Mk3 Chinook helicopter preparing to take off (stock image) [Picture: Andrew Linnett, Crown copyright]A short time later at 1958 hours, the crew was tasked to a suspected heart failure victim in South Galloway. The snow was so bad over land that the helicopter was forced to route along the coast – a much longer journey.
Even doing that, however, the helicopter was unable to battle through and, with fuel critical, returned to base.
The crew’s observer [navigator] Lieutenant Commander Andy Drodge, who is also HMS Gannet’s commanding officer, said:

It was absolutely the worst snow I have ever flown in. When we got back on the ground at Prestwick, the whole of the front of the aircraft was covered in ice.
​
Police informed the crew that they had managed to reach the victim by road.
And, at first light on Saturday morning, the same team was airborne and on its way back to Arran – this time to initially search for a man missing in a white van, though nothing was found (the man turned up at a house on the island safe and well).
While on the island, the team transferred a member of the coastguard, 2 members of the mountain rescue team and 2 medical staff across to the west coast of the island at Blackwaterfoot – much the worst area affected and totally cut off by road.
Saturday’s crew didn’t have to wait long for their taste of the relentlessly busy weekend.
Tasked from training at 1600 hours, they found themselves back on Arran, this time delivering basic supplies including blankets and flasks to Blackwaterfoot – once more landing at the hotel, which had its own generator and was providing a hub for the local community.
While there, they also transported a BT engineer the very short distance of about a mile and a half so that he could try to restore service at one of the island’s exchanges – he was unable to get through by any other means. 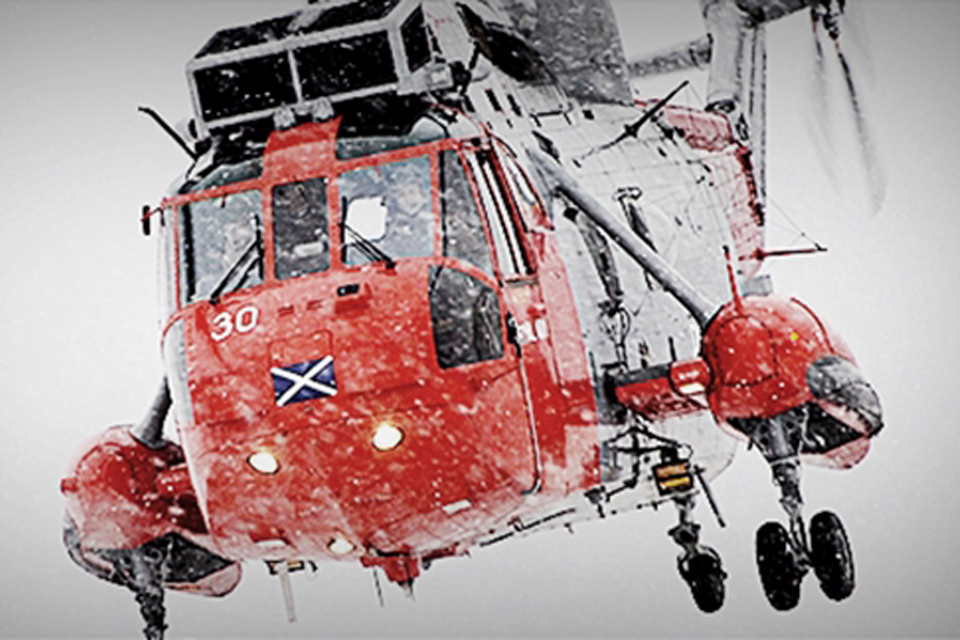 Apart from the obvious thick blanket of snow, conditions weren’t too bad for the helicopter.
​
What is a problem with that much snow is trying to work out what’s underneath it and whether we can safely land the aircraft on it.
​
Some things are obvious, but others are very difficult to see until you’re virtually on top of them.
​
Luckily we had been forewarned to watch out for the snowman in the hotel grounds at Blackwaterfoot, but the snow does really change the way the landscape looks – there’s a lack of visual references, which can be very dangerous.
​
Back at base some 3-and-a-half hours later, they had hardly landed before they were tasked to a seriously ill patient in Campbeltown at around 2100 hours.
Because of the power cuts, the landing lights for the air ambulance were out and it was unable to attend.
Flying first to Glasgow to pick up emergency medical retrieval experts, as well as battery powered temporary landing lights for the air ambulance, Gannet’s crew then flew rapidly to the Kintyre town, where they left the medical team, as well as the landing lights – the air ambulance was then able to go over and bring the casualty back.
And at 0300 hours on Sunday, the aircraft was airborne once more, again picking up the medical retrieval team (MRT) – their second call of the night too – to airlift an injured woman from Broadford on Skye to Glasgow, finally returning to base at 0900 hours.
A full 17 hours of almost continuous jobs and no sleep at all.
Handing over to the on-coming crew as soon as they returned, this new team was in the air once more just an hour after coming on shift to rescue an elderly woman from her house in Pirnmill on Arran’s north west coast, delivering her to Crosshouse Hospital.
Followed soon afterwards by another call to Arran, this time to deliver supplies and MRT members to Lochranza – again at the island’s north west tip.
The final 2 calls – one at 1510 hours and the second at 1820 hours – were both to Antrim.
The first was retasked from the previous job on Arran and they were forced to return to base at Prestwick to refuel, during which time they were stood down as no longer required.
The second was to a terminally ill patient in need of evacuation from home in the Antrim Hills to Antrim Hospital.

I wonder if the new civilian company (Bristows) would act and help like the crew at Gannet have?

If they get paid by 'der guvimint.'

Yes they will. They will be tasked as required.Would guess some of them will be the crews from Gannet.
B

Read in tabloids the Chinook in northern Ireland were requested by ministers of the Sinn Fein persuasion. My haven't times changed.

In short YES. I still have many friends who carry out the work for Bristows and some even made the ultimate sacrifice to save life. (Billy Deacon RIP), It's not just RN crews that will got he extra mile.

The only operators who have cried 'crew duty time' is the good old brillcreme boys! January 22nd 1982 - Scotland - Boulmer SAR. Refused to extract civilians stuck on top of train near Dundee!!!!! I clocked 11 hour 50 minutes strapped to a Sea King that day/night.

But would they assist to the equivalent of military aid to civil authority? That was my question as, surley the contract would have to be written to include that?

digger84 said:
But would they assist to the equivalent of military aid to civil authority? That was my question as, surley the contract would have to be written to include that?
Click to expand...

That would be a different matter again.

The Military would always support the civil authority. The remit no doubt of CivSAR would be the immediate saving of life.

I imagine IF the UK gets its new carriers with FW, the military may re-invent the SAR diver, and so it goes full circle. The military will also maintain it's own duty SAR helo's for the rescue of its own downed aircraft ashore. (I hope).